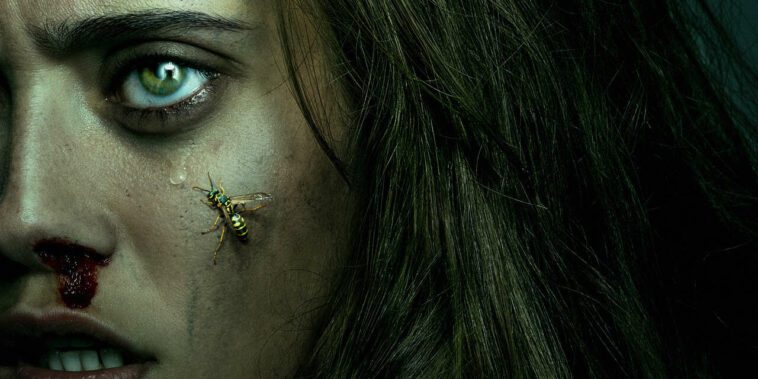 Welcome to What’s the Buzz, where members of our staff provide you with recommendations on a weekly basis. Each week a rotating cast of writers will offer their recommendations based on things they have discovered. They won’t always be new to the world, but they’ll be new to us, or we hope new to you. This week, Caemeron Crain recommends that you check out Yellowjackets on Showtime and Hawk Ripjaw has been watching The Mortuary Collection.

Caemeron: When I first read a blurb about Yellowjackets I have to admit I was not intrigued. A coming-of-age story about a girls’ soccer team didn’t sound like my cup of tea, despite the mention of the plane crash. I moved on down my list of upcoming TV series and forgot about it. Boy was I wrong to do so.

I do have to blame that blurb a little bit, because it really sort of buries the lede, but thankfully I saw Emily VanDerWerff tweeting about the show. It is about all of those things I mentioned…and cannibalism.

The first episode has been made available on YouTube and I went and watched it immediately. And it’s great. You can find my whole write-up on it here after it premieres on Showtime.

But you could also watch it on YouTube now.

Created by Ashley Lyle & Bart Nickerson, who also worked on Dispatches from Elsewhere among other things, Yellowjackets features a stellar cast list that is far too long for me to do justice to here. Christina Ricci and Juliette Lewis are highlights for me, along with Jasmin Savoy Brown, whose performance in The Leftovers still haunts me. But that’s only three of maybe 20 people you could get excited about.

The narrative is split between three timelines, which feeds into the overall feeling of mystery Yellowjackets elicits. It’s wonderful and strange.

It probably helps that I was myself in high school in 1996, and I have to say the presentation of what that was like is well done here. And it gives Yellowjackets the opportunity to employ some great ’90s music on the soundtrack.

Anyway, this has become the show I’m telling everyone to watch at the moment, and that now includes you! Check it out and check back for my in-depth thoughts on each episode over the course of the season.

Hawk: Anthology movies aren’t hard to come by in the modern horror landscape, but good anthology horror is a much rarer commodity. Enter The Mortuary Collection, a delightfully satisfying anthology flick from Ryan Spindell in his debut feature.

The framing device finds a young woman named Sam (Caitlin Custer) seeking employment at a mortuary run by mortician Montgomery Dark (Clancy Brown). Dark has a theatrical way about him, advertising the different stories of those who have died and passed through his “hallowed halls.” As a storm rolls in, Sam is emboldened and demands that Dark tell her some of these stories. Dark obliges her with a series of sinister and strange stories of death and suffering, each one more bizarre than the last. To reveal the core plot elements of each would be to deny the viewer of the joy of discovery, so I will do no more than say that you will not be wanting for good storytelling.

Clancy Brown is just terrific here as the mortician. He’s more than a little wacky, definitely kind of sinister, and relishes both telling stories and debating the meaning of those stories with his job applicant. According to IMDb’s trivia, Brown’s makeup took over two hours to apply and an hour to remove. Brown certainly seems to be having a blast being as weird as Montgomery Dark, and that makes it that much more fun to watch him chew the scenery.

A common pitfall for anthology flicks is that weak segment that brings down the overall cadence of quality, but The Mortuary Collection has a consistent level of polish that never lets it get boring for a moment. Each of the segments culminates in a wild finale that elevates the original concept, and the finale of the film proper is delightfully intense.

The standout segment, “The Babysitter Murders,” was one of Spindell’s original shorts. Spindell cut his teeth crafting campy horror in this short, so it’s great to see him evolve his craft. He clearly has a bright future in the genre.

You’d be hard-pressed to find a more fun, campy, and gnarly anthology in recent memory than The Mortuary Collection. It’s just a great time all the way through, and the crisp direction, inventive special effects, beautiful production design and entertaining performances make Spindell a name to watch. I can’t wait to see what he does next.