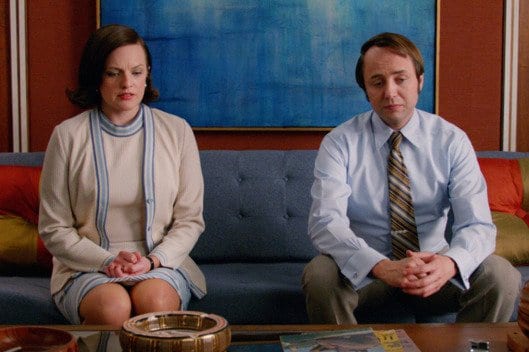 I have never seen a show with such wisdom about men and women, than Mad Men, created by Matthew Weiner. I am brought back again and again to the song ‘Sweetheart Like You’ by Bob Dylan when I watch. Its sexism is made human by the deep yearning for a simple life, without the complications and pain that come with true equality. Mad Men is the story of society coming to terms with that equality between human beings who do not wish to be judged on their gender alone, but on something greater, more pure. When I think of Mad Men reaching unexplored depths and insight into how men and women operate, I think of four characters: Pete Campbell and Peggy Olsen, and of course Don Draper and Betty.

Pete Campbell is frequently a heel, using his power over women to get them to sleep with him, and stabbing people in the back whom he believes are weaker than he. He is however not a monster, or a cartoonish villain; he is just a man. A conflicted man, in pain and struggling to come to terms with his own frailties. Pete knows in his heart that the days when his kind had unchallenged control are over, and even if they weren’t, he is not the picture of masculinity that the powerful dictate will rule. He is, in a way, just as lost and terrified as those who are held down by the status quo. Pete is just as complex as Don Draper, a man whom he looks up to as a father figure, and is written and performed with such clarity and insight that it makes me cry. I relate to Pete, even when I don’t want to. He makes me question myself in a way that makes me feel incredibly uncomfortable. Like Dylan, Pete doesn’t mean to be condescending or insulting when his privilege make him come across as unenlightened. He fears the day when his position is no longer safe, and when he acts out, it is in a desperate scramble to hold on to the last of his power.

This is something that lesser shows would fail on: depicting all characters with the subtlety of real life. It is rare that you meet a woman or a man who is stereotypical in every aspect. This is why a show that is in many ways about the struggle for equality, is so much greater than a simplistic and obvious call to arms for social change. There are no monsters here, just damaged people who are at once powerful and frail. Pete Campbell would have been easy to write as a caricature of a man. He would have been easy to write as someone whom inspired righteous thinking modern men and women to gather around the television and watch in glee as his life was ripped apart. Carried along on a wave of progress and social change, he comes to terms with it in his own way, and while in one sense self-serving, Pete shows signs that he is capable of thinking beyond his own interests.

Think of the awkward, terribly believable conversation he has with an African American man in the elevator about why he bought the television he did. Yes, it is embarrassing and from a time that was far worse than it is now in terms of racial equality, but it is most of all real. When Pete tries to make up for the awkwardness and unthinking racism he has expressed, he says “You don’t watch Baseball? I don’t believe you.” They both laugh. Some progress has been made to find common ground. Mad Men is then not just about the BIG changes, but about how small but honest efforts are the way forward. Pete is also supportive of Peggy, when he’s not trying to seduce her. While he acts out in ways that assume sexual privilege as a starting point – I’m thinking of when he coerced an Au Pair who has ruined her employer’s dress into sex – he doesn’t believe ultimately that Peggy is below him. This is indicative that it is not in his heart or his soul to be a sexist, racist asshole, but that it is a product of his environment and his foundations.

Peggy Olsen is in many ways the true hero of Mad Men, rising above the lowly spot that society dictated was her place. She is brilliantly smart, talented and someone whom you would want to spend time with at the expense of all others. Her journey from secretary to a major creative and professional force is awe inspiring in its scope and its detail. Almost every single scene that Peggy is in makes me want to stand up and applaud, which I do pretty frequently when watching Mad Men. Like Pete, Peggy’s relationship with Don is an important one that reflects a parent and a child. Don was the first one to truly believe in her, and when they don’t see eye to eye, it hurts. There are some devastating scenes late in the game where the roles are reversed, and Don is the one in need of help and guidance. This is not just a lovely use of the master/student roles, but something that comes in a way that is organic and completely in keeping with the characters as written.

The relationship between Pete and Peggy is also one of the most enduring and intriguing of the show. The scene where Peggy explains to Pete that she could have had him at any time she wanted, and that she gave their child up for adoption just straight up decimated the viewer. This is a power that Pete can’t compare with. He is a slave to his instincts every day. Peggy meanwhile is a liberated, independent woman who is in full control of her future apart from any maternal instincts or gender specific behavior. This is something that Pete can’t quite comprehend: here he is, driven by how he sees himself stacking up to his father, to his colleagues, in money, power and sexual conquests. And yet here is a woman whom he believed would be grateful to go to bed with him, because he is powerful and she is not, and she refused to catch him in a net and hold on to him for dear life. She had what he assumed she wanted, and she gave it away.

My favourite scenes in Mad Men are often the ones that express the creative process. Peggy has some of my favourite lines, including the wonderful, hilarious, “I’m Peggy Olsen and I want to smoke some marijuana!” I love watching her work out the problem of expressing the essence of a product. This is something that is overlooked on occasion: just getting to see a woman as a creative force, not a sexual object or a prize to be married. This is in a way the most progressive and audacious element of the show: to see a woman who is an artist, at the top of her game just being better than any of her peers. She is the true heir to Don’s throne. As a person too, she is in her own way, just as conflicted and unsure as Don, though nowhere near as self-destructive.

Self-destructive masculinity is a major element of Mad Men and Don Draper is the king of self-destruction. Being driven by sexual desires, both in following them and in resisting them, is something that Mad Men spends a lot of time exploring. Think of the tragic story of Sal whose inability to be himself, a gay man, ends up destroying a career that took years to assemble. Characters whom are hiding from themselves and confusing their needs and their wants, are abound in this show. Don is not Don. Don is someone else, someone lower and who could never have risen above his low down social standing. He is the purest expression of The American Dream, both in its fantasy shape and also its crushing reality. Don is always in pursuit of something else, something down the road. Whether this is a woman or a truly lasting and powerful piece of ad work, he needs to keep on down the road. One day, it will satisfy him. He hopes. Don’t spiral down and down. It is his obsession with being a man chasing the dream, being a real man’s man, hard drinking and bleary eyed and fucking everything that moves, that defines him.

Don does indeed end up alone. His only connection with the women he loves being over the phone and separated in physical space. By finally losing all of what he built though, he for the first time understands his place in the world, and in a spark of creation conjures something that will endure in a way that nothing else he created will. He finally gets that big one, tapping into the zeitgeist in a way that will in many ways define a cultural shift. By embracing the deep hole in his heart, he transcends his crisis of soul and in a move that is at once cynical and at once sincere, creates an ad that defines the optimism and social change of his environment. He finds his place by at once rejecting and embracing the emotional trauma and toxic masculinity that up until this point defined him.

Betty is a character who doesn’t immediately hit the viewer as being as sympathetic as the other women in the show. When you spend some time with her however, you come to understand how she is perhaps the most complex and subtle character in the show. The Gilded Cage is her environment, and while she is in her own way, just as privileged as Don and Pete, the cage, gold or not, is indeed her prison. The scene where she sells her so called friend down the river – a woman who had the guts to have an affair rather than just fantasize about it – by chastising her for being unfaithful, many viewers felt this was a sign of Betty’s poisonous nature. No, it was something that depicted in crushing clarity, the conflict and hurt that defined her life. She was forever on the sidelines, waiting on her coach to call her in.

Compare her lack of agency and power in this scene with that of the encounter she has with Don in a motel late in the series. She has, just like Peggy and Joan, grown into the new space that has seen the necessity for male driven security diminish. She has taken control of her life in a way that, rich husband or not, liberates her body and soul. She has found peace. The struggle to find peace, in among all of the hideous, beautiful and terrifying things that gender and sexuality bring to our lives, is the central concern of Mad Men. It is in rejecting those harmful impulses and neuroses that we become our true selves. The powerful dictated the status quo. The powerful were rich, white, straight men. They had both hands on the wheel and everyone else was in the backseat, without a say on where they were headed. Mad Men is the chronicle of the journey from the backseat, for all of those without a voice, to the passenger side and to eventually, cautiously place a finger on the steering wheel. A small change, but one worth celebrating.