In discussing The Righteous Gemstones with a friend of mine, I pointed out “There aren’t many shows where Danny McBride can say ‘I hope the Devil fucks you dry’ in one episode and have a scene of genuine prayer and self-reflection one or two chapters later. To me, that kind of encompasses how well it balances its characters and their development.

In the early episodes for The Righteous Gemstones, there was an engaging sense of character development woven through the caricatures of deep south hypocritical ministers. Through the R-rated antics of the family and searing takedown of prosperity theology, the show provided real characters with real motivation. It was expected that the second half of the season would build to something huge, but while that came to fruition, that culmination was significantly more intimate and affecting than any sort of cliffhanger or twist as several characters experienced major movement. 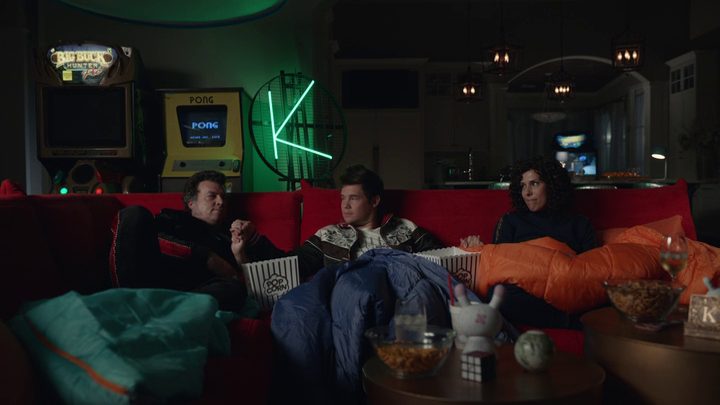 There’s a turning point in Episode 7 “And Yet One of You is the Devil” in which the catty Judy Gemstone (Edi Patterson) is finally confronted and called out by her usually-meek fiance BJ (Tim Baltz). Until this point, BJ has been the butt of most of the scenes in which he appears, and Judy’s constant put-downs at his expense have been amusingly searing. This time, BJ puts his foot down,  acknowledges how supportive he’s been of her with no reciprocity, and leaves.

It’s worth noting that her interactions with BJ are the only times in which she has any sort of control. She is often maligned by her brothers, and her father refuses to involve her in any of the public operations of the family business.  When Eli finally invites her to perform at the bombastic Easter ceremony with Baby Billy, her enthusiasm to do right by her father, be a public figure in the church, and honor her mother’s memory causes her blinders to go up, and she treats BJ like a second class citizen for the last time.

Danny McBride and his writing team have continuously improved on a great thing in how they structure their character arcs. Vice Principals was narratively straightforward but had some of television’s best character work in how it developed the genuine platonic romance between its main pair, who themselves were awful human beings with interesting goals. They evolve from reluctant partners in a common goal to genuine friends. The Righteous Gemstones takes this idea and builds on it, weaving nuance through every facet of the characters.

An early episode finds Jesse entering Gideon’s room to pray. While the prayer is accompanied by a weird montage from other characters, the core dialogue of the prayer is of Jesse acknowledging that he is a sinner, saying that “it is not me” and thanking Jesus for His gifts. It’s such an interesting moment for a character that is generally kind of a shithead but, in his most vulnerable moments (which are, notably, mostly in Gideon’s room) he’s much more of a genuine person.

It gives credence to the show’s central thesis of people behaving, in their private moments, far differently than the public front that they put up. Most obviously, it’s a farcical blast on greedy televangelists, but in the quieter (and often best) moments, it flips the formula and shows these superstars having intimate moments in their faith. It highlights that the Gemstones had a foundation of genuine godliness that seemed to mostly die with Aimee-Leigh, but still exists as an aching remnant swept up in the modern Gemstone empire.Where the Gemstones are at the beginning of the season and where they find themselves at the end suggests that this family is on the way to rediscovering that core of absolute love that Aimee-Leigh had. 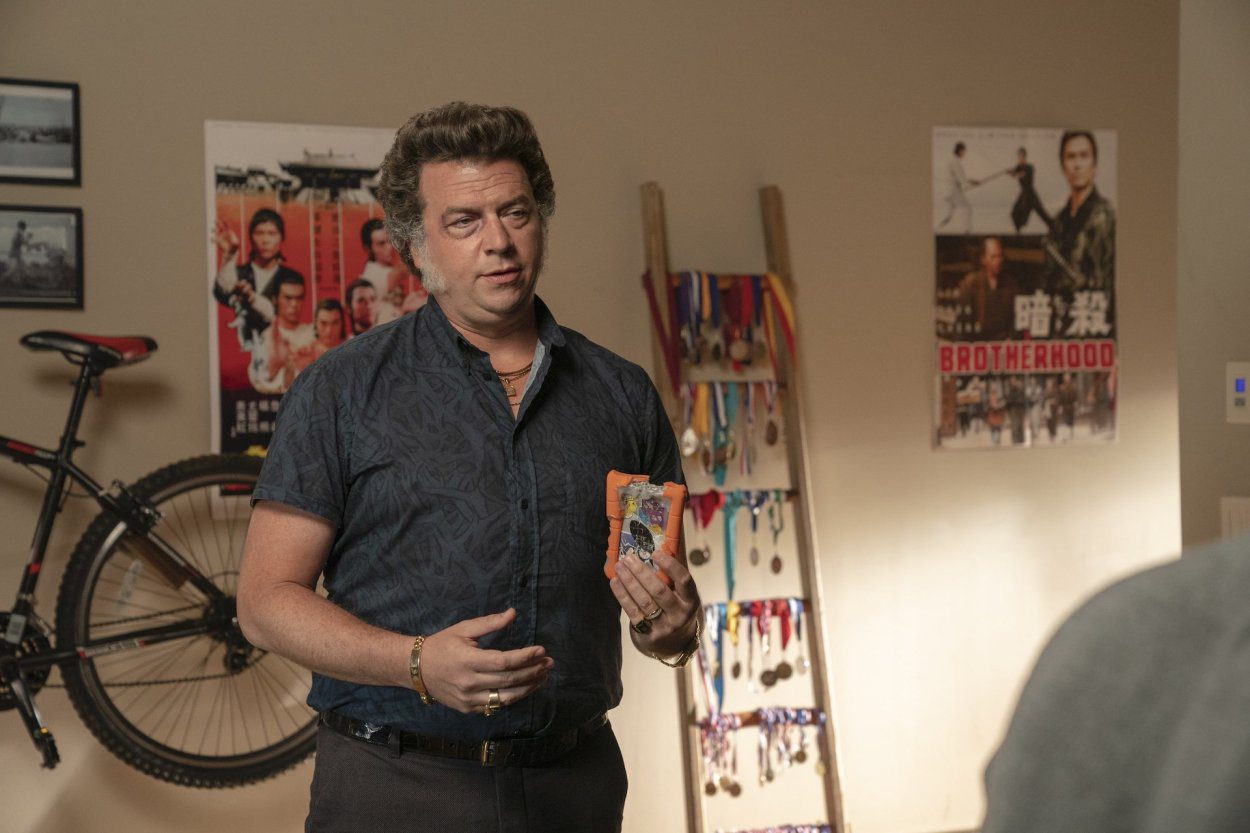 The relationship between Gideon and Jesse is arguably the most complex in the show. When it comes to the adult Gemstones, there’s plenty of bickering and put-downs, and sometimes reconciliation, but it’s always tinged with humor, regardless of how dark it is. At the outset of the season, Jesse openly refuses to even let Gideon’s name be spoken in his house. After Gideon moves back in, Jesse’s anger slowly starts to morph into a genuine effort to welcome his son back into his life, unaware that Gideon is still planning to rob them. Gideon’s decision to not betray his father plays alongside Jesse’s Easter sermon of how personal and hurtful Judas’ betray of Jesus before his crucifixion was.

Later on, Gideon admits his involvement in the blackmail scheme. His mother throws him out of the house, but Jesse has an emotional heart-to-heart with his son. Each of them admit their wrongdoing openly. All of Jesse’s self-centeredness and arrogance melts away as he owns up to his actions recorded on the blackmail tape and how his treatment of Gideon pushed him to start the scheme. They finally reconcile.

Judy and BJ meet up later for him to collect the last of his belongings, and they have a heart-to-heart. Judy tells an extremely dark and graphic story about how she sexually assaulted one of her professors and then technically abducted his kid to explain the situation. She uses this as a way to illustrate to BJ how she’s toxic to healthy relationships, and each of them is surprised to find that they’ve both lied about past sexual experiences to impress the other.

This monologue is a prime example of what makes the show work so well, intermingling genuine character growth with creatively vulgar dialogue. It’s a careful balancing act to portray the main characters as unlikeable people that you want to see develop, but it’s executed well here, particularly when Judy’s walls come down and she breaks down in tears, simply apologizing to BJ. Even though Judy has spent the entire series as someone who is an absolute monster of a person, her vulnerability is disarming. 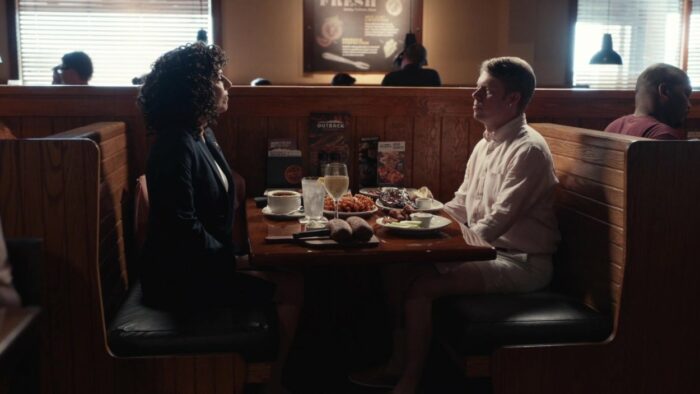 After learning of what they’ve been doing so far in the season, Eli casts out his children, cutting them off financially and refusing to talk to them, until they figure out that Baby Billy has come into possession of their money. After forgiving them, Eli chucks a small Jesus figurine at the wall, shattering it (he thought it was “a karate person”). Horrified at his mistake, he and his children glue the figure back together: a symbolic rebuilding of their family unit. They set out together to take their money back.

The show has one more surprise in its final moments: a beautiful, almost tear-jerking sermon from Eli. He speaks about having empathy for one another, even those who have hurt us. It’s one of the first times since the “Interlude” flashback episode that his lust for power seems to have taken a backseat to his faith. His words play over a montage of Eli approaching his rival Johnny Seasons to make amends, and inviting him to join his ministry as a partner, leading the mall installment.

Thus far in the show, every scene in the megachurch has culminated in some event or character detail that reinforces a prevalent scene of this family being greedy and artificial. This final sermon has no clapping, no turf wars, no absurd thinly-veiled celebrity humanitarian events, no ridiculous rock bands singing generic gospel jams, and no collection plates.

As he continues to speak about forgiveness, the deceased Aimee-Leigh and Scotty are shown sitting next to each other in the congregation. It’s a powerful shot: Aimee-Leigh is bathed in a soft light, and Scotty is well-groomed and appears to be at peace. In this shot, the most loving and the most hateful characters in the show so far, who have (as far as we know) never met, are in the same shot enjoying Eli’s message of kindness. It’s also meaningful that the presence of actual religion in this sermon is kept to a minimum: the message is universal and humanist, advertising simple kindness and goodwill.

Eli ends his sermon with the final words of the season, mentioning the ability to begin again. Jesse steps out of a bus and begins digging with Gideon. It’s expected of a Danny McBride character to end the scene with a dumb joke about dirt, or poor people, or his clothes. But they dig together in silence before a cut to black and the end of the season. There’s no cliffhanger, no increase of stakes, just a peaceful conclusion. It’s such a profound way to close that particular arc, and exemplifies how McBride has matured as a writer.

McBride stated in an interview that he intends for the show to last longer than either of his other shows, referring to this season as just “Chapter One.” It’s interesting to consider what he may be planning for future seasons of the characters.So far, only Kelvin seems to be aware that the family are frauds who don’t practice what they preach (literally). He’s been perhaps the most genuine Gemstone: he lives and dies by his ability to be a guiding light to others, and in a moment of crisis he rejects his best friend and reformed Satanist Keefe. He snaps out of his funk after learning that the devastated deviant has returned to his former ways, and crawls into Keefe’s BDSM slime pool to perform a literal rebirth. The arc is brief, but impactful in how it shows Kelvin’s devotion to those he cares about guiding.

The Gemstones haven’t really changed much at the conclusion to this season, they just understand themselves, and each other, better. Season 1 finds most of the characters in what will probably be short-lived harmony, and with Season 1’s plot hook cleanly resolved, it opens up Season 2 for even more of that character development that has been done so well thus far.