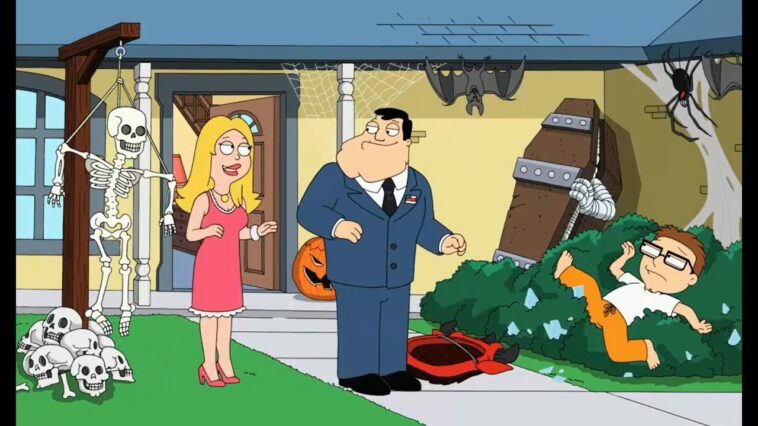 Happy Halloween! It’s that time of the year when some of us don masks and lurk about in the night, others party with friends, and some of us…well, we’re looking for something to watch. With that in mind, Daniel Siuba recommends some spooky episodes of American Dad!, including one inspired by The Omen. Meanwhile, with no connection but the spookiest synchronicity, Steve Swift recounts when he saw a midnight showing of The Omen on Halloween some 30 years ago. The dogs were out that night. Were the dogs not what they seem?

Daniel: On Halloween, I tend to prefer watching shows and movies where the silly-meets-the-macabre rather than going into all-out horror. So, for this week’s What’s the Buzz, I decided to focus on Halloween-inspired episodes of my favorite cartoon comedy, American Dad! (stream it on Hulu and the TBS app).

There are a multitude of episodes that could make up this list, but if you want to start with something fairly straightforward, watch S6E3 “Best Little Horror House in Langley Falls.” This episode begins with a haunted house contest and ends with several serial killers being released (plus a hefty number of Kill Bill references). From here, I’d recommend watching the episodes that aren’t explicitly about Halloween, but which feature sexually repressed poltergeists (S10E2 “Poltergasm”), ’80s inspired teenage boy witches (S12E9 “The Witches of Langley”), rapidly aging clones and Blade Runner references (S10E1 “Steve and Snot’s Test-tubular Adventure”), and a plethora of human and nonhuman time traveling iterations of Steve and Snot (S11E11“The Unincludeds”).

Other horror-inspired gems are S8E1 “Hot Water”, a musical about an demonic hot tub, which is narrated by Cee Lo Green, and S8E2 “Hurricane!”, a gory tale of a devastating weather event which features Kristen Schaal as Roger Smith’s relentlessly needy crush (even in death, she still manages to be super clingy).

And then there’s S11E10 “The Two-Hundred”, which celebrates American Dad’s 200th episode. The story begins in a kind of old-timey-post-apocalyptic future, stylistically reminiscent of the game series Fallout. It’s a gruesome, silly tale of survival, and it culminates in a epic battle that reveals the true meaning of the episode’s title.

If you’re still craving more, I’d veer toward American Dad’s Christmas episodes. This might sound strange, but most of American Dad’s Christmas episodes are, on the whole, pretty terrifying (but fun). For example, in S5E9 “Rapture’s Delight” the “good people” of the world are suddenly “raptured” and ascend to heaven on Christmas day. The story jumps several years into the future, where the earth has become a wasteland filled with demons and the ever-obnoxious Antichrist. Jesus recruits Stan Smith (and eventually Roger and his angry assistant Qui-Lo) to help rescue Francine from the clutches of the Antichrist.

Another favorite of mine is S6E8 “For Whom The Sleigh Bells Toll”, an eerie story that begins with the accidental murder of Santa Claus, who comes back from the dead with a vengeance, leading to a Christmas battle that might be the most intense (and most gruesome) fight sequence of the entire series. The following season features S7E7 “Season’s Beatings”, an Omen-inspired episode about the accidental adoption of the Antichrist and resulting the conflict between the Smith family, who are divided about what to do with the evil child.

Finally, there is S12E7 “Ninety North, Zero West”, in which Steve accidentally ends up in the North Pole and is kidnapped by Santa Claus, forcing the Smith family to rescue him (Santa still harbors enmity for the Smith family after the events of “For Whom The Sleigh Bell Tolls.” Their ongoing rivalry is a part of almost every Smith family Christmas). This episode also features some of my favorite bits, like Roger’s Grindr jokes, a deformed Christmas elf who is accidentally sliced in half, a few snappy Krampus one-liners, and Francine’s pretentiousness regarding the translations of ancient Sumerian texts.

I hope these apocalyptic tales of ghosts, witches, clones, the Antichrist, demonically possessed hot tubs, and a relentlessly pissed off Santa Claus bring you laughter, joy, and a little fright this Halloween season.