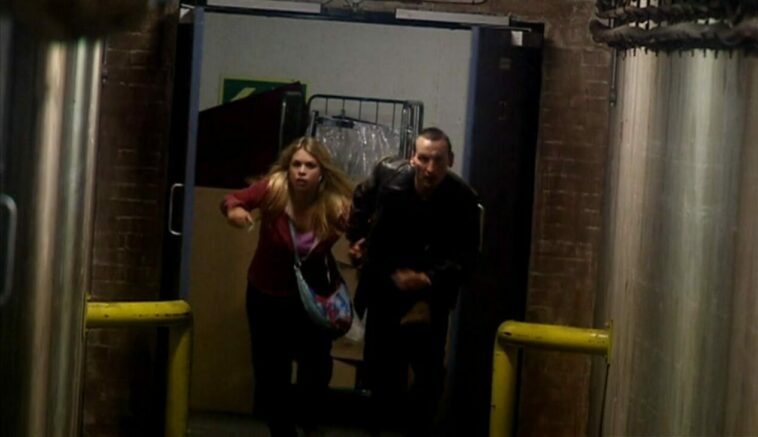 Fittingly enough for a show based around time travel, revisiting the first season of Doctor Who’s 2005 revival feels like opening a time capsule of sorts. The series’ previous glory days as a staple of British television were long behind it, an attempt at a revival in the mid-90s went nowhere, and the show wouldn’t reach its current status as a bonafide international phenomenon and a cornerstone of geek culture until later seasons.

This first season of Who, then, finds the show in an in-between state of sorts and has very much become a throwback season, in ways both good and bad. There’s a refreshing sense of simplicity to be found in the show’s narrative, which is relatively free from later Who’s excesses of love stories in reverse, impossible girls, and completely reinventing the Doctor’s origins to ensure that they are the most special, most wonderful person in all of time and space. But there’s also a definite roughness and uneven quality to the season.

Breaking away from the serial format of the classic series, Season 1 of Doctor Who adopted a Buffy the Vampire Slayer/X-Files “Monster of the Week” style of storytelling. The monsters in question were a mix of the classic (Daleks), the instantly iconic (The Empty Child), and the…best left forgotten (the Slitheen). The standout episodes—”The Empty Child”/”The Doctor Dances,” “Father’s Day,” “Dalek,” and “Rose“—are still some of the finest episodes to be found in Who, but other points of the season are an almost unbearable drag.

On top of it all, the whole thing is held back by the ever-memed BBC budget of shoestrings, pocket lint, and loose change that was acquired by holding interns upside down and shaking it out of their pockets. And yet, Who’s first season is one that remains near and dear to my heart, in large part due to the figure at the heart of it: Christopher Eccleston’s dynamic, tragically underrated Ninth Doctor.

The task that Eccleston and showrunner Russell T Davies were faced with in Who’s first season was daunting, if not borderline impossible: taking a character with nearly 30 years of existing television history and reinventing him for modern television tastes and sensibilities, while also still remaining (somewhat) true to the character’s history. Not only did Eccleston and Davies handle this juggling act exquisitely, they also manage to craft an excellent character arc in the span of just one season before Eccleston handed off the reins to David Tennant’s Tenth Doctor.

When we first meet the Ninth Doctor, he’s practically unrecognizable—not only is his leather jacket and buzzcut ensemble a stark contrast to the colorful costumes of Doctors past, his attitude and demeanor are touched by elements not prominently seen in any previous incarnation: what can only be described as PTSD and…fear. Afraid of not only what he’s seen, but in what he’s found himself to be capable of. He’s still mischievous and a bit of a know-it-all (as well as the only version of the Doctor able to channel just the right amount of “disappointed parent” energy needed to tell a child turned into a gas mask clad alien zombie to go to his room), but he’s now a man practically shell-shocked in the aftermath of what would prove to be revival era Who’s greatest ongoing mystery: the Time War.

In-universe, the Time War was a borderline apocalyptic conflict between the Time Lords and the Daleks. In the context of the show, the Time War was everything for revival Who: a way to clear out most of the baggage that had accumulated over the course of classic Who, a way to reserve classic monsters to be reintroduced or reinvented for later seasons, and a way to add a sense of mystery and unease to the Doctor’s character. The Time War might have been the most enduring question of modern Who, but in those early years especially it went hand in hand with just what the hell this man had seen and done that had left him this way.

The other side of the coin was, of course, the one and only Rose Tyler, the first—and arguably most iconic—companion of newer Doctor Who. Part of Russell T Davies’ philosophy is that the companion is the true protagonist of any given run of Who, with The Doctor serving a role more like that of a guide to time and space, and the result was a companion more dynamic and with more agency than many of the show’s previous damsel-in-distress archetypes. Rose is confident, outspoken, and at times even gets to have an agenda of her own, trying to save her father’s life in “Father’s Day” (S1E8) and coming back to save The Doctor against his wishes in “The Parting of the Ways” (S1E13).

Thanks to the impact that Rose’s presence has on him, we slowly see the Ninth Doctor reemerge from his shell and become a more compassionate, open version of himself. Nine is never as dark as people generally claim he is, but there’s a clear progression in his character throughout the season, from the closed-off loner we first meet in “Rose” (S1E1), to the PTSD-fueled fear and rage that comes out of him in “Dalek” (S1E6), to the overwhelming joy felt at the end of “The Doctor Dances” (S1E10) at an adventure that finally gets to end with “everybody lives!,” to the man who when given the choice in “The Parting of the Ways” (S1E13) between killer or coward chooses “coward…coward every time.”

This focus on the emotional, human element of its stories is what would prove to be the bedrock of modern Who—still a show about adventures in time and space, but more sentiment, less sci-fi. Russell T Davies and company understood that while the horror of “The Empty Child”(S1E9)/ ”The Doctor Dances”(S1E10) might come from a place of future technology running amok, the real power of that story comes from its reunion of a mother and child and the joy felt by a man who’s seen far too much death when everyone gets to live for a change. Even the season’s incredibly loose overarching mystery ultimately comes down to Rose attaining godlike power because she cares that much about The Doctor, and The Doctor in turn “sacrificing” himself in order to save her life.

It’s unfortunate, then, that Nine often feels forgotten in the wake of his far more popular successors, partially due to simple longevity—both Ten and Eleven got much more time to grow and leave their impact on audiences—and partially due to an unfortunate real-life rift between Eccleston and the BBC that led him to want no part in the show’s future. Eccleston even declined to return for the 50th anniversary special, leading to a brand new Time War specific Doctor being wrangled into the narrative as a stand-in, leaving a hole in the narrative as it was clearly meant to be the story of Nine that was only ever hinted at. But while our time with him might have been short, the Ninth Doctor and his single, marvelous season, were—as the character himself would want it put—absolutely, timelessly, completely and utterly fantastic.