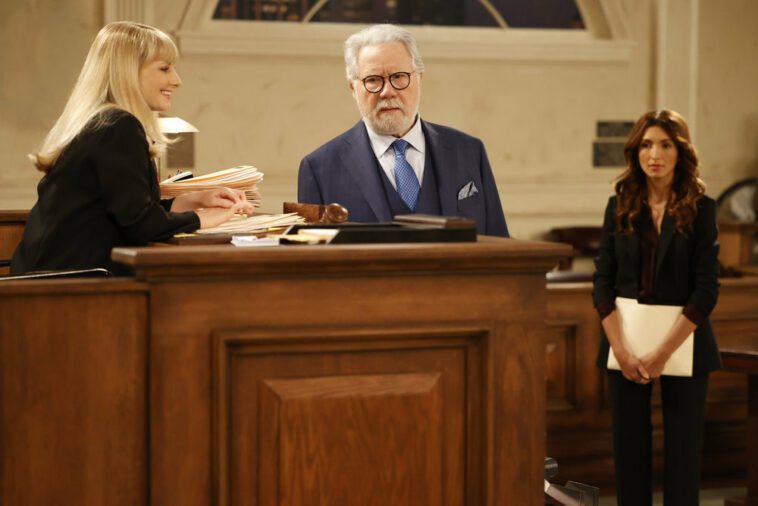 So the Night Court reboot has finally premiered. And with that, Night Court, which initially went off the air in 1992, has joined the extremely long list of shows from the ’80s that are back on television. Like Magnum P.I. and Quantum Leap, and so many other shows that seem to be rebooted everywhere, it seems the entire reason this show exists is that someone at NBC forced it to happen.

This Night Court reboot is also a sequel to the original. John Larroquette is back as Dan Fielding—though he is now, having been disgraced sometime between the end of the original and the start of the reboot, a public defender. Melissa Rauch is playing Judge Harry Stone’s (the late Harry Anderson) daughter, and the setting, along with the set, is exactly the same as the original, just 30 years later. Everything about the show seems to pay homage to the original, but it remains to be seen why it exists at all.

Night Court certainly has its fans (including my mom who was a huge fan of the original) but it also seems like an odd choice to reboot in the current era. The show was a very standard multi-camera sitcom, filmed in front of a studio audience (which meant we got the distinctive laugh of the creator’s father in the laugh tracks), and, despite how the setting is really the perfect place for it, there was basically no social commentary to be found—unless a judge having an outlandish love of Mel Tormé and magic is social commentary. Outside of Larroquette, who was spectacular and who won four straight Emmys (and could have won more, he removed his name from consideration after the fourth win), the show wasn’t a critical darling either. Night Court was simply pretty well-liked and relatively successful and then it went away.

But now, we have the Night Court reboot and nothing much has changed. Abby Stone (Rauch) has taken over her father’s seat on the night shift of the Manhattan Criminal Court and the character seems designed to fill his role as the wacky judge.

The first episode of the Night Court reboot is focused on Abby getting former Prosecutor Dan Fielding to return to the court and his first case back in his old stomping grounds. Fielding has been languishing and needs to be revitalized, and somehow it seems his old friend’s daughter thinks returning to this relatively low-level gig from his past, but trying to help people this time, is the best use of his prodigious talents. Even though his particular quirks and issues should probably have already had Fielding disbarred—and potentially in jail.

That is also true of Larroquette—the first part about him returning to former glory, not the part about belonging in jail—he certainly seems out of place back on a network sitcom, particularly since being the star of a network sitcom has absolutely none of the panache it had in the ’80s. Larroquette’s portrayal of Fielding has an interesting lived-in quality. He certainly has the vibe of being the same character, but it also feels forced and over the top. Larroquette has to handle being the series’ emotional center, its wackiest character, and the biggest link back to the original. And, while Larroquette is an incredible actor on both stage and screen, that is a large burden to put on one actor.

This speaks to one of the huge difficulties the Night Court reboot has to overcome: that a large number of the original cast members have passed away, in addition to series lead Harry Anderson. Prominently, both Markie Post, who played primary defense attorney Christine Sullivan, and Charlie Robinson, who played Mac, the court clerk, have passed within the last two years. Selma Diamond and Florence Halop, who played bailiffs Selma and Flo respectively, both died during the show’s original run. Original series creator Reinhold Weege has also passed on so Dan Rubin is serving as head writer and producer of the reboot.

Original cast members Richard Moll (Bull) and Marsha Winfield (Roz) are still living, but don’t seem to have been offered roles in the new series. I’m holding out hope that Roz will be asked to join at some point, but considering Bull was abducted by aliens in the original series finale—Night Court was a strange show—and Moll seems to have burned some bridges with his interviews lately, I don’t think we will see him back any time soon.

And that leads us back to the Night Court reboot. The show is…fine. Perhaps someday it could even be decent. But the jokes, style, characters, and comedy are so clearly intentionally mirroring the original it is hard to figure out how and why it was created for a modern audience. Every joke just seems a bit off, mostly because almost every joke, at least in the first two episodes, seems like it could have been delivered in 1985.

The pilot, with the focus on Abby bringing Dan back to serve as a Public Defender on the night shift at the Manhattan Court, is very basic and seems content with setting up the status quo. Which includes setting up the cast, who the audience will need to grow to know and love for the show to actually develop a following. By the end of the second episode, key figures are Assistant District Attorney Olivia (India de Beaufort), who will be key as she fills Dan’s old role, the court clerk Neil (Kapil Talwalkar), and Lacretta as the bailiff, Donna “Gurgs” Gurganous.

Like the original series, the Night Court reboot has already experienced cast upheaval, as de Beaufort replaced Ana Villafañe as the ADA. In the original, it was the public defender position that rotated until they finally found Markie Post, who had the perfect chemistry with Anderson and Laroquette, so maybe this rotating of one of the key roles will turn out to be a good thing.

While the pilot presents the whole cast and the first case, it is very nice that S1E2, “The Nighthawks,” also aired at the same time. The second episode shows the way the series will likely continue as long as it lasts—with crazy antics and weekly hijinks all resulting in little or no growth or change in the central cast.

This is how the original show ran for nine seasons, but it is very different from how TV shows tend to run today (though maybe I just feel that way because I avoided all of the Chuck Lorre shows). Rauch in particular could definitely become a highlight as Abby Stone has more time to distinguish herself from her father.

Though it is when Rauch, like Anderson before her, is able to ping off Larroquette and create some real heartfelt moment in the middle of the insanity that the new version of the show is most like the original at its best. But that is the biggest issue the Night Court reboot faces: its best qualities and its worst limitations are all intrinsically tied to the original series, and seems unlikely it will ever really break free from those connections. Though who knows, there is always the chance with courtroom-based shows that the sequel will surpass the original.