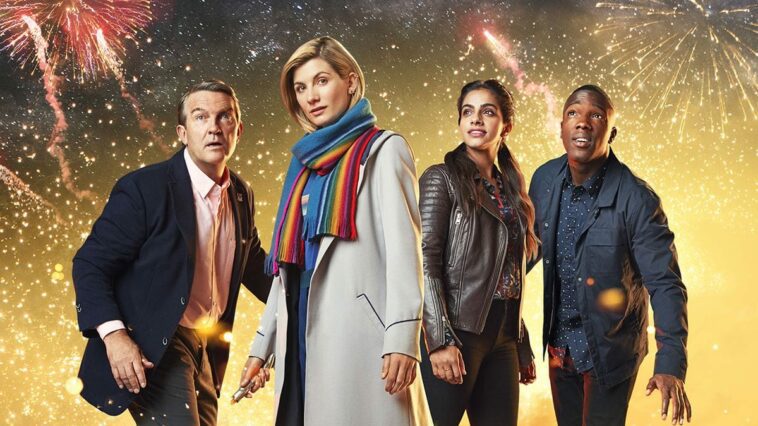 Three brave tribes have gathered the remains of a dangerous creature in the 9th century. They divide the remains amongst three warriors called the Three Custodians and vow to bury and guard the remains for all time. Two warriors succeed in their journeys home to Anuta Island and Siberia respectively, but the third falls prey to robbers in Sheffield and the remains are forgotten in time. That is, until New Year’s Day 2019.

Two archaeologists, Mitch and Lin, uncover the remains under a building in Sheffield. Mitch reckons these artifacts could prove an ancient story entitled “The Battle of Heard Valley” to be true. However, when the creature’s remains are placed under a blacklight, that’s when things go sideways and the episode kicks off. The energy from the blacklight activates the creature’s cells and it’s able to transport its missing pieces to its current location. Meanwhile, the Doctor is treating her TARDIS fam to 19 different New Year’s Eve celebrations through space in time when the TARDIS emits a warning signal.

When the creature’s remains go missing, Lin goes to investigate, encountering a slippery squid-like creature. Soon after, the Doctor and crew arrive, ready to investigate. Lin takes them to the wall where the creature was and the Doctor takes a sample to analyze back at the TARDIS. The Doctor shuts down their excavation sight straight away. The archaeologists part ways, with Lin looking tense.

The Doctor does a quick scan of Sheffield before landing at Graham’s flat for a while when who of all people shows up? Ryan’s dad, Aaron, who has been much talked about but missing in action throughout season 11. When introduced, the Doctor plainly calls him out for not being at Grace’s funeral and for letting his son down. The callouts continue when Graham demands a word as well before Aaron and Ryan pop over to a nearby coffee shop to talk. Aaron explains he’s here to make things right and start fresh, but Graham warns him:

“Family isn’t just DNA…or a name. It’s about what you do.”

Across town, Lin arrives home, still visibly shaken and sick in the bathroom when she takes off her coat revealing the creature wrapped around her back and stomach. The creature begins to control Lin’s body and mind. 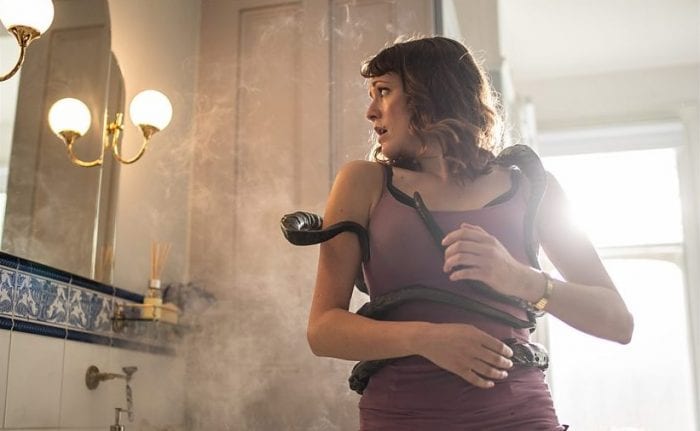 Back at the TARDIS, the sample analysis is complete and the Doctor goes quiet, almost in shock. It’s a Dalek. Meanwhile, the Dalek controls Lin and begins downloading information about Earth and its defenses.

As the Doctor explains who the Daleks are and why they’re dangerous, Graham tries to reason that one is no match for all of Earth and the Doctor, but the Doctor isn’t so sure. “I always think I’m rid of them,” she says, “but I never am.”

Yaz tries to follow up with Lin while the Doctor ponders how the creature is getting around without its iconic casing, only to cut to Lin swerving through traffic, killing two police officers and hijacking their vehicle.

Back at the coffee shop, Aaron tries to patch things up and explain his behavior to Ryan, who demands he apologize. Aaron says he ran away from his problems instead of facing them, with Ryan agreeing that he hid when he needed him.

Yaz and crew track down Mitch and get more intel on the archeological dig that was taking place before the Dalek revived itself. He fills them in on the legend and the Doctor works out that the Dalek could be using Lin to get around. The Doctor uses Mitch’s phone to locate Lin and understands that it’s using her as a host, intoning:

“I learned to think like a Dalek a long time ago.”

Just then Ryan returns with his dad and a microwave (because that’s what he’s selling now). The Doctor figures out the Dalek is a recon scout that has additional powers and some of the first to leave Skaro. The Doctor sends Graham on a peanut butter run (to help fix bits of the TARDIS). Meanwhile, Dalek-controlled Lin continues her killing spree, and infiltrates the MDZ archive where more bits of Daleks are held.

The Doctor breaks through the psychic bond to warn the Dalek and comfort Lin and tell her to hold on, all while rebooting her TARDIS, leaving Graham and Aaron behind. The Dalek continues to evade the Doctor’s tracking so she finally puts in a call to UNIT only to find the organization has been closed down due to lack of funding.

Graham and Aaron catch up over old items that Grace had kept, with Aaron explaining that part of his reason for not coming to Grace’s funeral meant he could pretend she was still alive. The two agree there is still time to patch things up with Ryan.

Lin has now driven out to a remote garage, with the Dalek’s purpose now clear: build its iconic casing and take over the Earth. In many ways, the scene harkens back to the scene from the first episode where the Doctor built her own sonic screwdriver. (Is Sheffield the new Cardiff, minus the time rift?) Lin continues to fight the Dalek.

The Doctor, Yaz, Ryan, and Mitch all arrive at the garage shortly after. They find Lin on the floor, minus the Dalek. The Doctor sends the crew back to the TARDIS to tend to Lin’s wounds and says she’ll fight the Dalek alone.

Finally, the moment comes and the “garage chic” Dalek is revealed, all patina and red glowing lights. The Doctor tells the Dalek it will never win against the humans, citing how they banded together centuries ago to keep the planet safe. The Dalek argues that humanity is weak, and that’s when the Doctor reveals who she is. 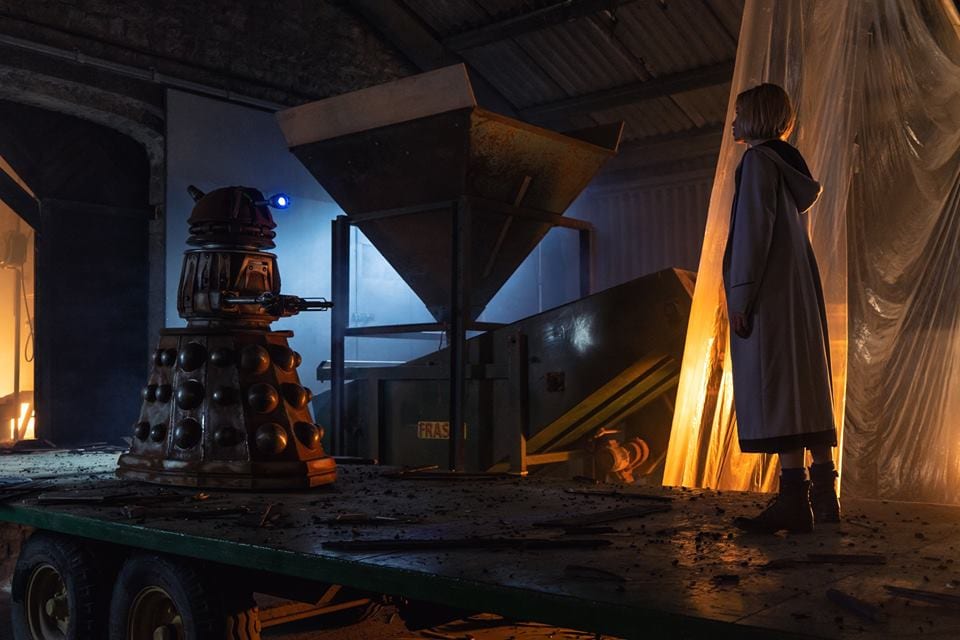 The Dalek disables the Doctor’s sonic screwdriver and says its next order of business is summoning the Dalek fleet. The Doctor returns to the TARDIS to continue the chase when Graham calls, telling the Doctor to come and pick him up. The TARDIS drops in and Graham and Aaron jump in.

Meanwhile, the Dalek takes out a whole group of soldiers in one fell swoop, before heading to the communications centers of the UK. Aaron gets the idea to use parts of the microwave to blow up the Dalek (like the tribes did before in the 9th century). The Dalek halts all communications, causing everyone to lose their wifi and Internet on the worst day possible when “everything’s shut down and everyone’s hungover.” (“What a monster,” Ryan says.)

The TARDIS lands at the communication center and the Doctor issues one final warning before sending her team into action. The now-extended TARDIS fam attaches bits from the microwave to the Dalek’s shell to burn it up and stop the signal. However, the squid bit of the Dalek survives and attaches itself to Aaron, demanding they take him to the Dalek fleet. The Doctor agrees on the condition that the Dalek not hurt Aaron.

Ryan begs the Doctor to help him, and the Doctor asks him if he trusts her. The doors open to a supernova sun with a vacuum corridor big enough to suck the Dalek up. The corridor begins to expand and they risk losing Aaron until Ryan jumps in and holds him until the Dalek is sucked away into the burning sun.

The Doctor drops Mitch and Lin off at their site, and Ryan and his father part on good terms. Yaz asks where the Doctor is thinking of going next, to which she simply answers, “Everywhere.”

Chris Chibnall proved that you can have a season of Doctor Who without Daleks, which makes their return all the more satisfying and scary. The new body-hugging, human-controlling version felt like references to Alien and Invasion of the Body Snatchers and brought the horror level up without needing a special effects budget. The new Dalek design is a grungy riff on the new-series Daleks, which anchors itself well against the brightness of the Thirteenth Doctor. It felt good to see the design be stripped back a bit (i.e. not the Skittles-colored Daleks of Matt Smith’s era). Jodie Whittaker’s quiet and seething anger underneath contrasted her typical light frothiness well. This is the sort of slow-burn energy I’ve been wanting to see all season. In many ways, she’s what I wish the Tenth Doctor could have been for me (and probably was for most other fans). She gives almost one too many chances compared to the likes of the darker sides of the Eleventh and Twelfth Doctors. If was good to see a darker flicker and to know that she did not come to play when the Daleks finally showed up.

Chibnall has good ideas, but his writing continues to be the weakest link of the show. The domestic drama which Russell T. Davies and Steven Moffat were so good at feels tacked on here, with the resolution (pun intended) between Ryan and Aaron coming rather quickly after a single introduction to the character. And with the addition of Mitch and Lin, there’s barely any room (or purpose) for Yaz, who has proven faithful and brave through the whole season.

Doctor Who will return in 2020 and with it, I hope, grand ideas and new writers. As a writer, I can see his intentions but they leave me just interested, not invested. This Doctor and her companions are giving it all they’ve got. Here’s hoping they get more stories worthy of them in the year to come. That’s a good resolution, right? 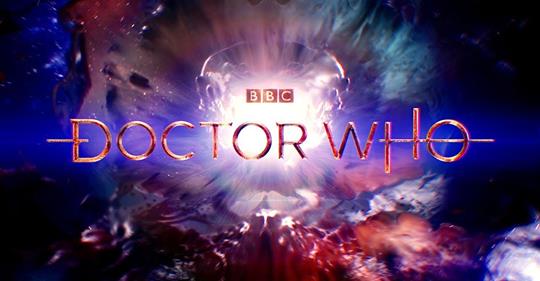 Rachel Stewart has written fandom commentary for sites such as FangirlConfessions.com, Nerdy Minds Magazine, and ESO Network, among others. She has work in the anthology “Children of Time: The Companions of Doctor Who.”