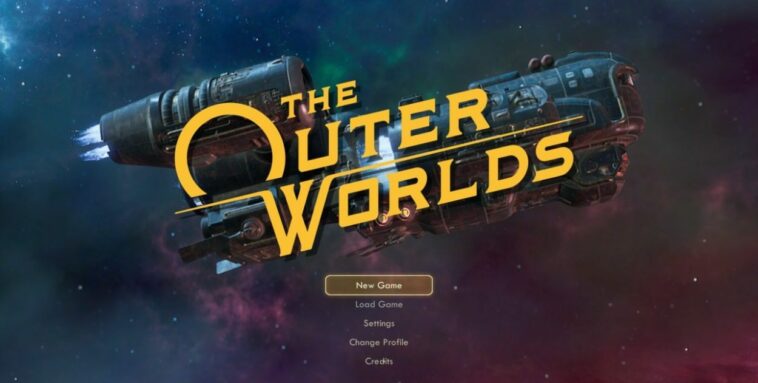 First off, yes. It is absolutely worth the hype. Obsidian delivers in all the best ways with The Outer Worlds. It’s not perfect, but nothing ever is, and Obsidian’s fingerprint is all over it. At the moment of this article’s writing, I am about 6 hours into the game and had to be pulled away. Before we get into the nitty-gritty of this game, it should be noted I was playing on Xbox-One, so there will be slight differences between my experiences regarding the graphics and players who are on a Playstation 4 or a PC. 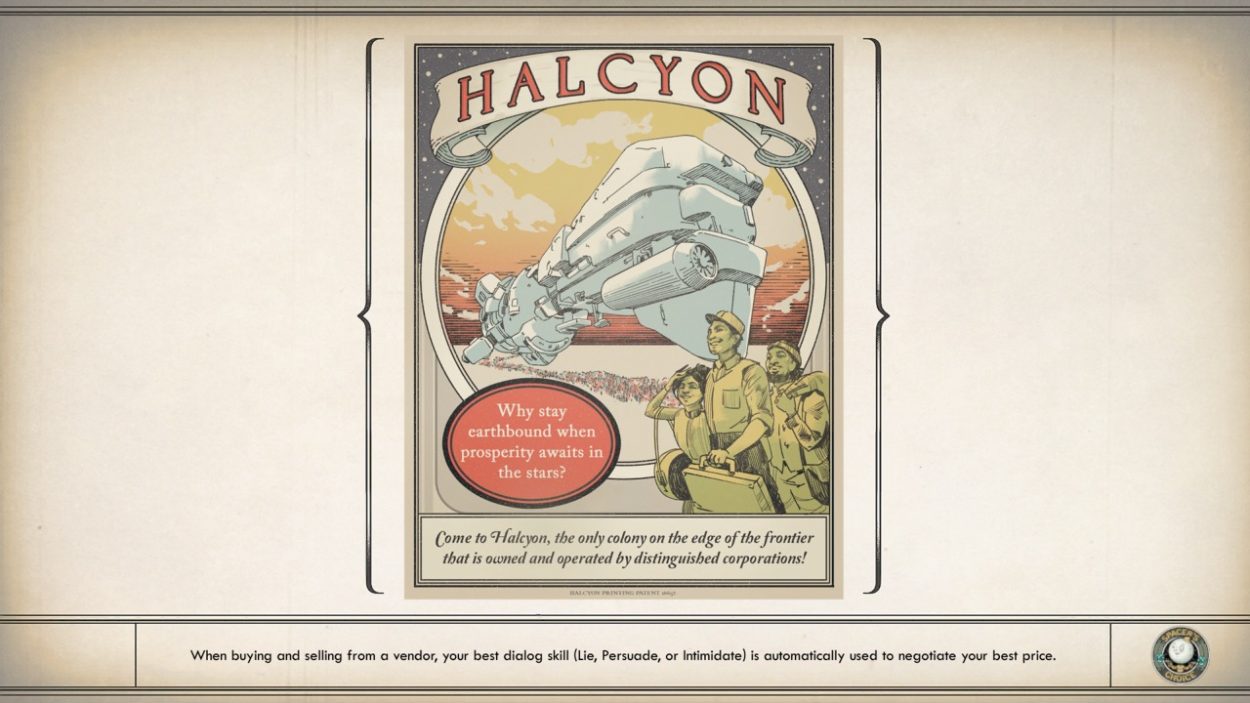 The game starts off, as most do, with difficulty selection. It’s fairly run of the mill with an Easy, Medium, and Hard mode, as well as a Supernova Mode. Supernova is very similar to Survival Mode in Fallout and attempts to provide a more gritty and “realistic” mode of the game. It adds an additional layer to the game and is highly recommended for players looking for a more difficult experience.

After choosing your difficulty you begin character creation, which is a mix of aesthetic and practical choices. The Player is given a fairly wide range to create whatever mix of monster and supermodel they’d like. The only restriction that seemed to come up was the lack of long hairstyles, but as far as gripes go that’s fairly minor. 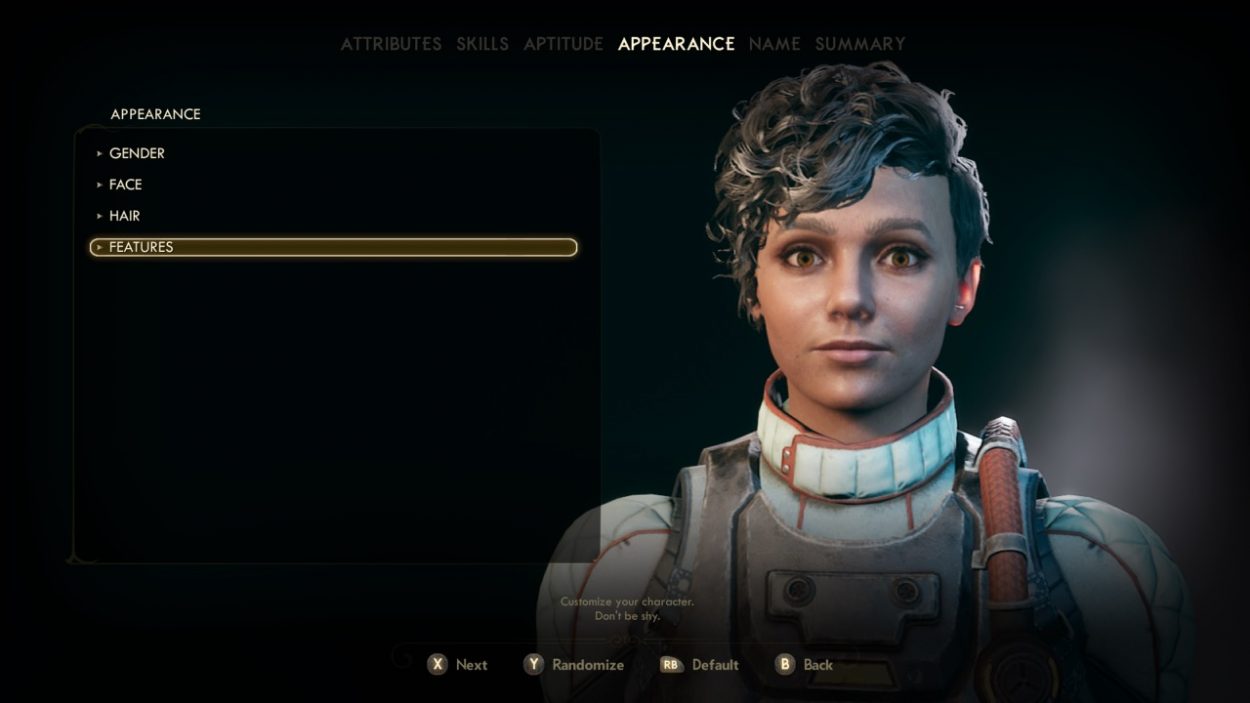 On the practical side, you are presented with Attributes. These are 6 separate attributes, Strength, Dexterity, Intelligence, Perception, Charm, and Temperament. My personal spread is below. How you distribute your attribute points will affect the number of points you start in your various skills 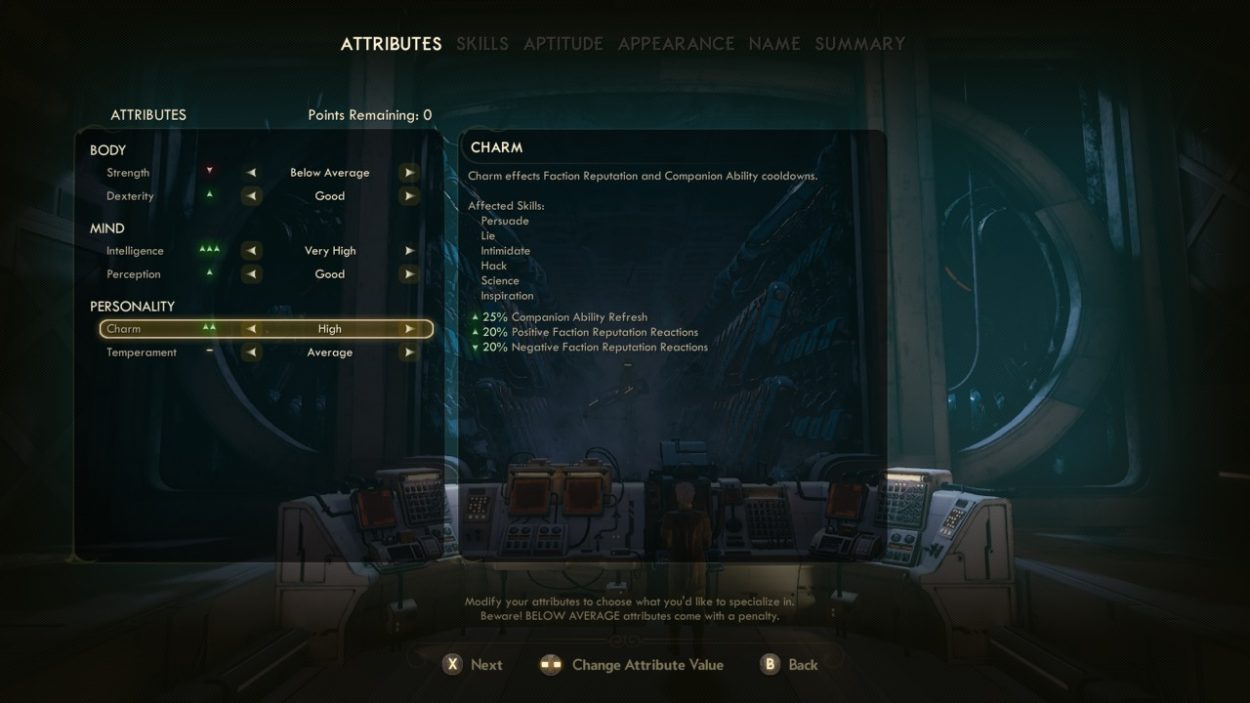 After choosing your attributes you are brought to a screen that will become very familiar. Here you are provided 10 points to distribute across your skills, which is pictured below. Each of these skills is placed in a set. You are able to level up every skill in a set at once with one skill point until that skill reaches 50. At that point, they will need to be leveled up separately. 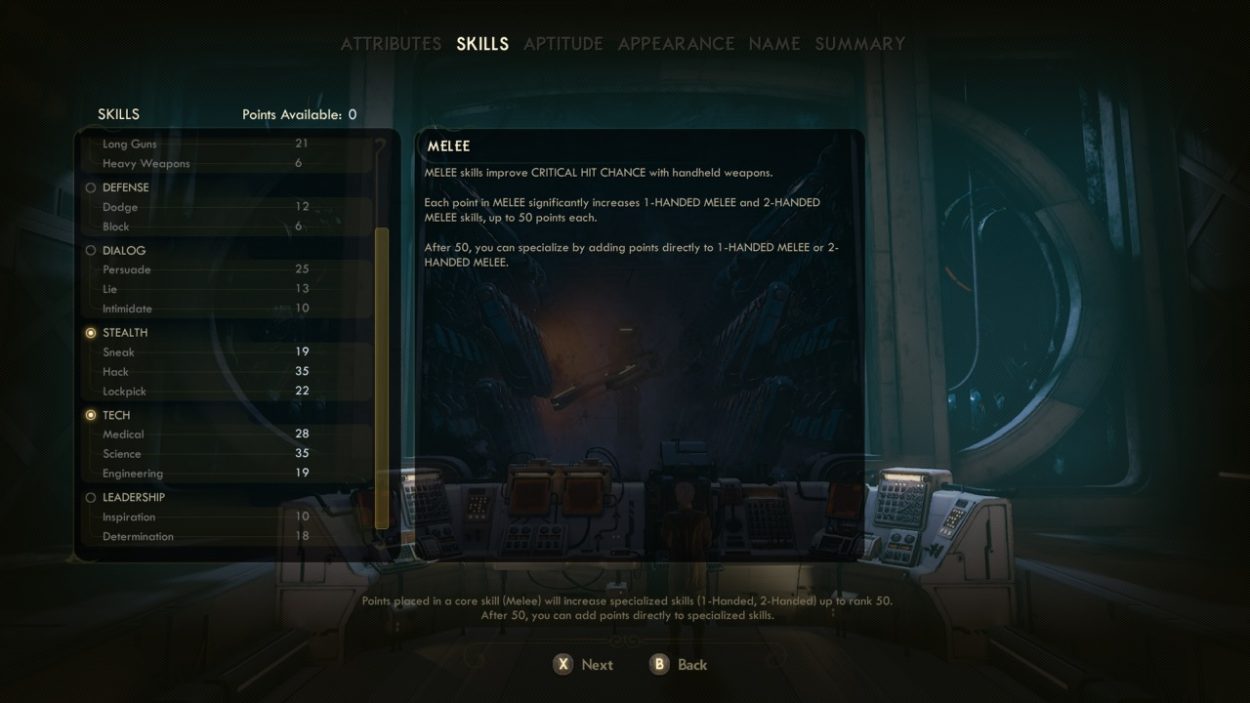 Finally, you are given a summary before you head off into the vast depths of space. You are able to look over your character one last time before moving on, and this screen will be pictured below. 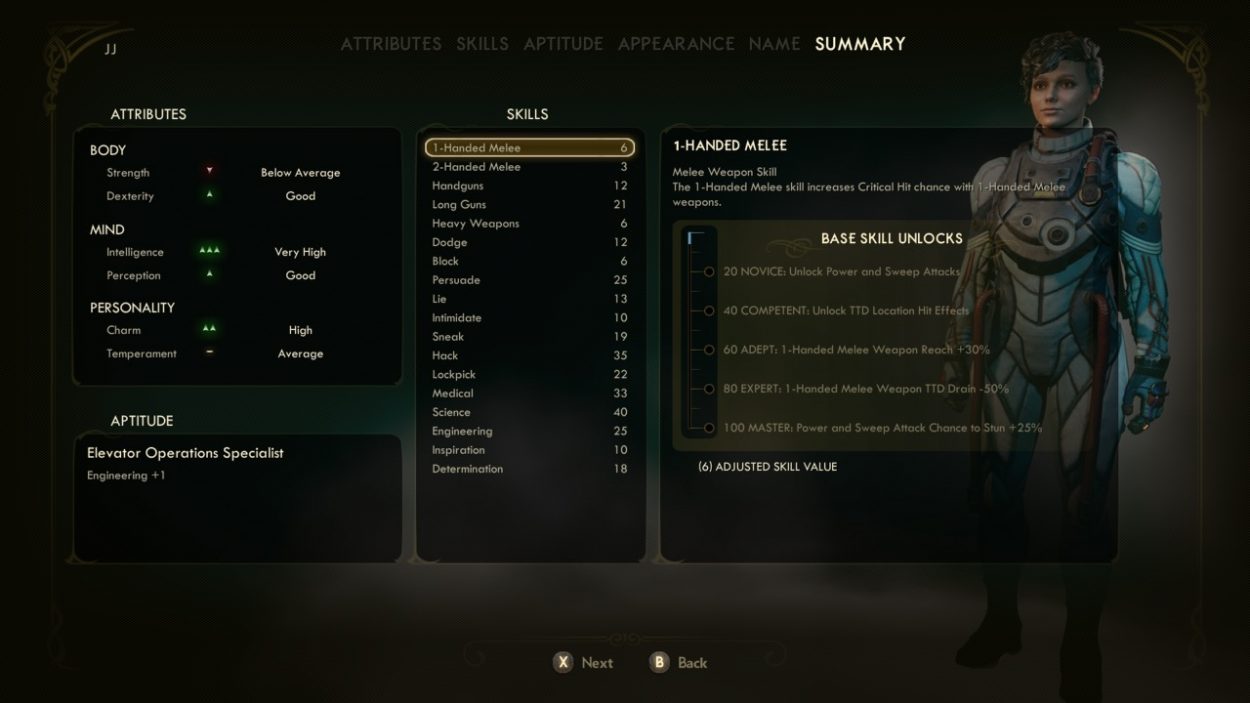 All of this definitely seems daunting at first, but once you are in the game it feels natural and comprehensive. It might be lengthy, but it feels vital to the game and does a great job of pulling the player into the world.

Due to the fact that I have only played about 6 hours of the game, I can’t speak to the depths of the story, but at the point where I am, I can say with certainty that it is well crafted. The side quests are fun and engaging, and I can confidently say they are the reason I’ve barely scratched the surface of the actual story. The Companions are exciting and are maybe the best part of the game for me so far. Parvati, the first companion you meet through the main quest is amazing and easily my favorite at this stage. 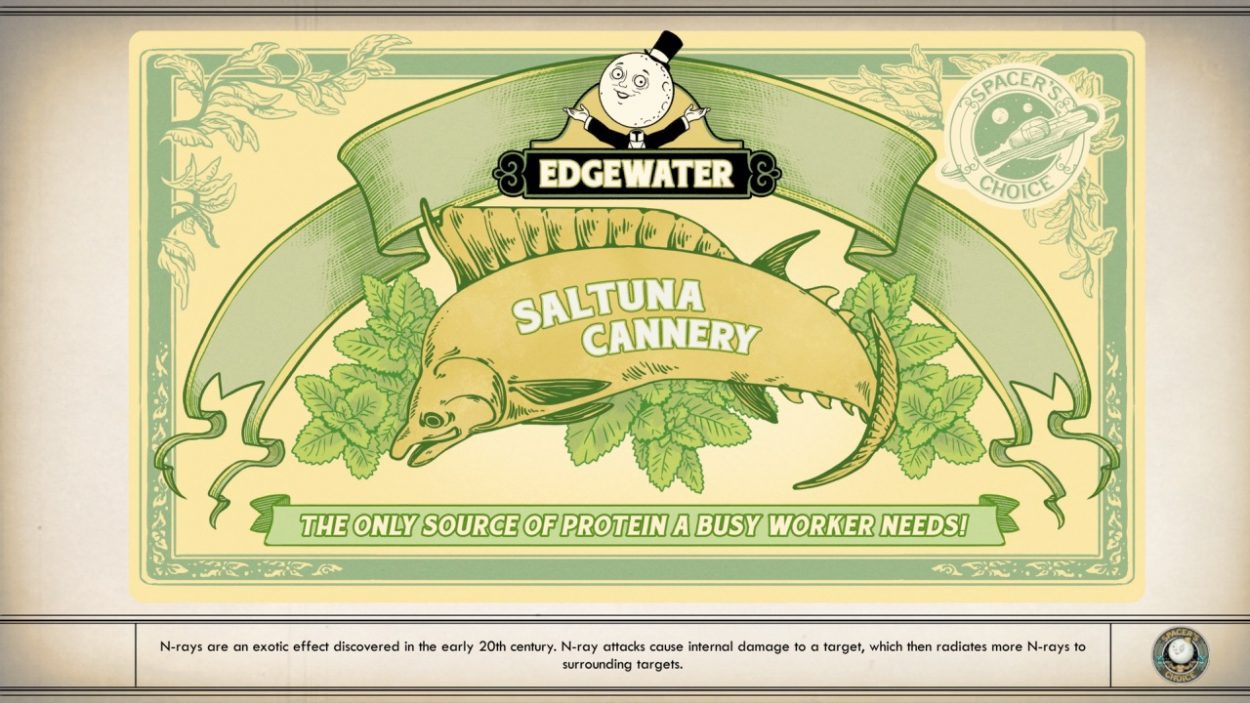 This is probably the weakest point of the game. The graphics are stylized and while the environments are pretty, they’re below par. There were multiple instances where I walked into a room and the textures hadn’t loaded and took a second to do so. The faces are often just slightly off, and it can definitely be jarring. 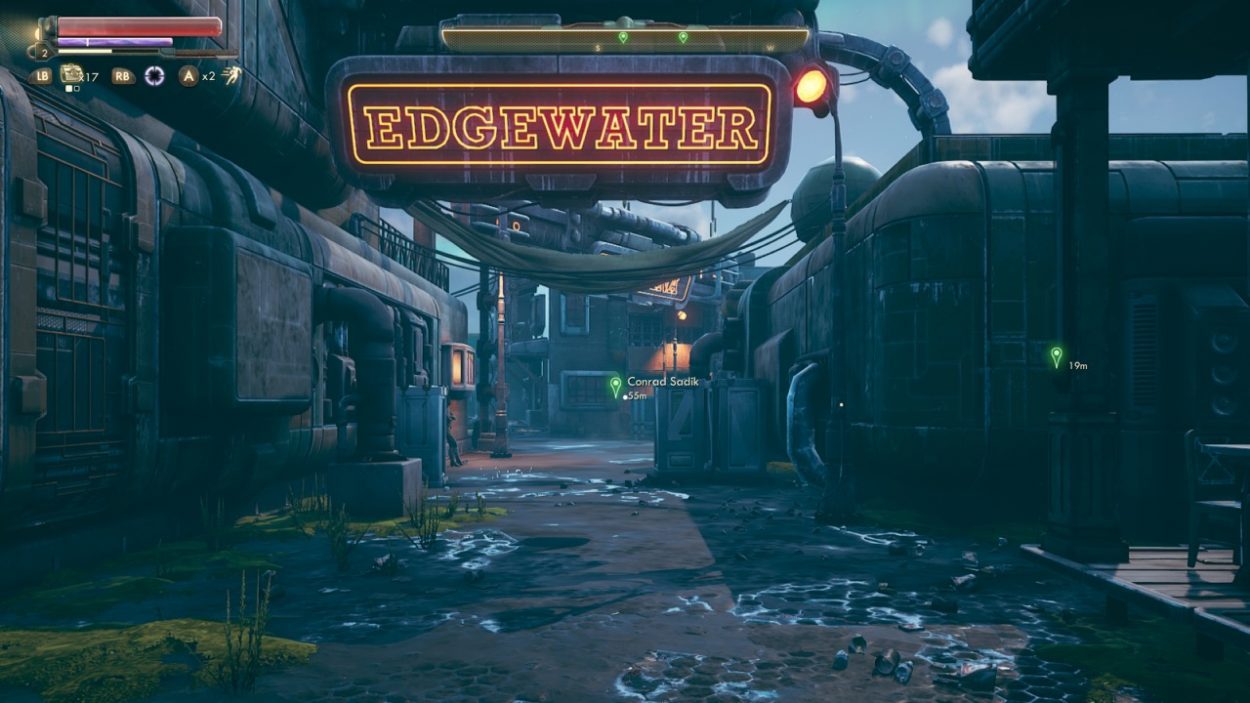 The only other weak point in the game is the combat. There’s a fairly wide variance in weapons and enemy types to keep it interesting, but if you choose to avoid Tactical Time Dilation, The Outer Worlds’ version of VATS pictured below, the shooting can feel erratic and hard to dial in. It’s not the worst ever, but it’s definitely noticeable. 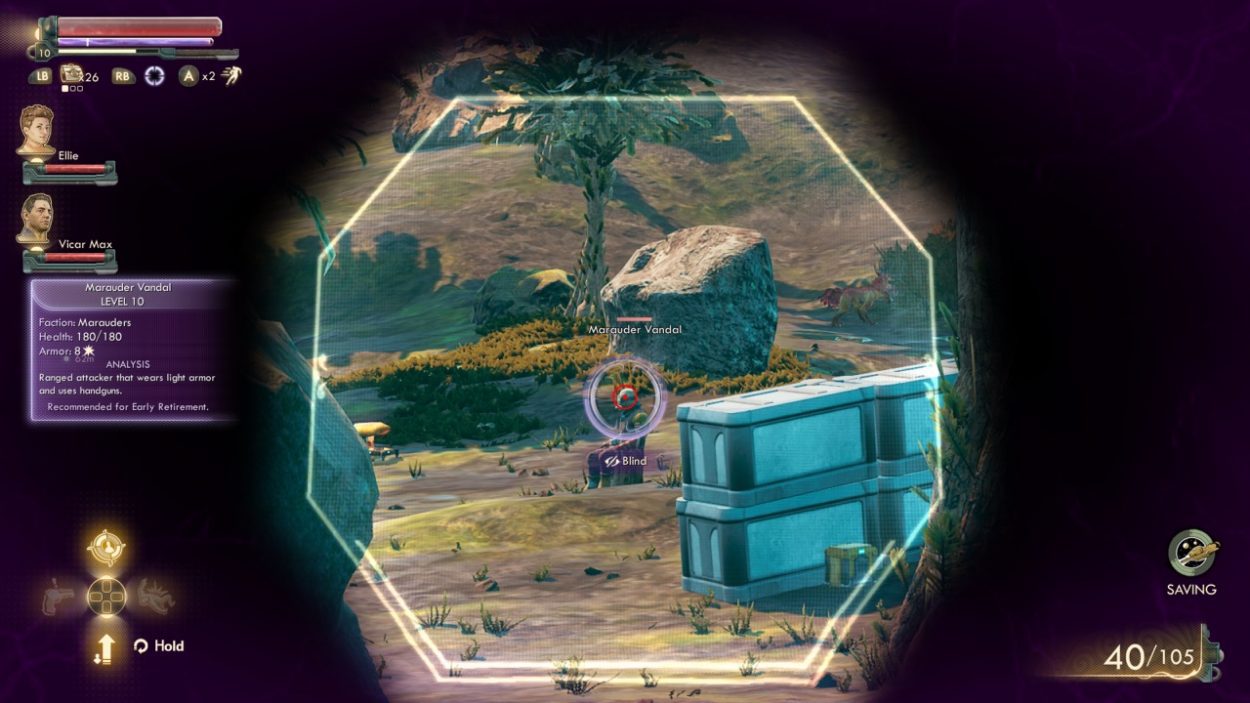 Fortunately, you can avoid a lot of the combat through either stealth or speech options. The speech trees are heavily reliant on your skills, and so depending on you build your character, you could avoid most combat altogether. 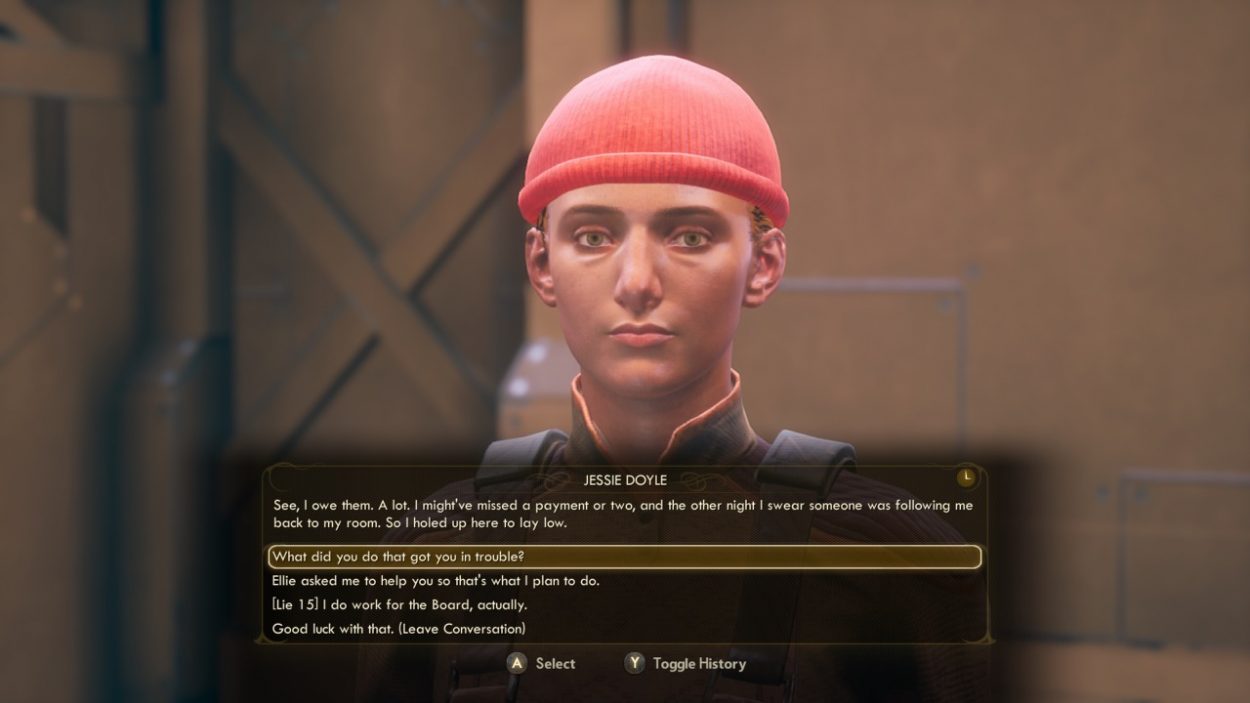 When you level up you are given 10 points to distribute amongst your skills, and every two levels you can choose a perk. These perks can range from increased health or carry weight to helping your companions do more damage and getting experience from their kills.

All in all, this is a wonderful game that suffers from a few technical flaws. Those flaws are noticeable, but by no means ruin the experience of playing The Outer Worlds, and I would recommend it highly.

JJ uses They/Them pronouns and is pursuing a Bachelors in journalism and history at The University of Nevada, Reno. They are a freelance photojournalist and frequently works with various antifascist causes along the West Coast. JJ is heavily involved with their local Queer Student Union and Food Not Bombs. They can be found on twitter at @jj_mazzucotelli, on Instagram at @faerie_gothfather and on their website https://jjmazzucotelli.photoshelter.com/.