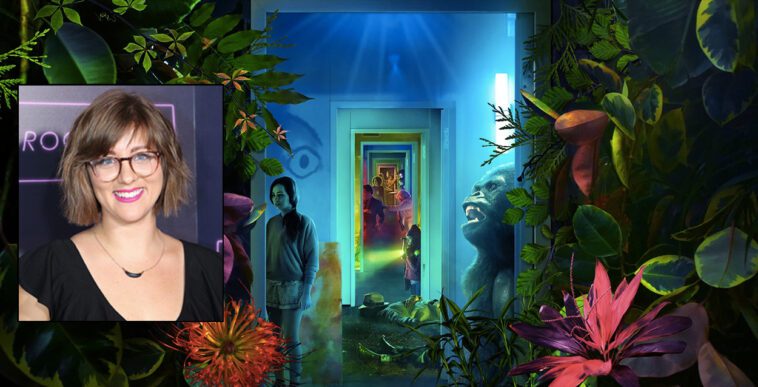 Room 104 just finished up its third season run on HBO; a season that stretched the boundaries of the premise a little more, and got a little bit more experimental generally. Sydney Fleischmann is a film and television producer who’s worked closely with the Duplass Brothers for several years. Having been involved in films such as The Overnight, Blue Jay, and Asperger’s Are Us, as well as the excellent but (in my opinion) criminally under-watched Duplass Brothers-produced TV show Togetherness (HBO), she has served as an executive producer for Room 104 since the first season. We caught up with her to ask a few questions about Room 104 and the work that goes on behind the scenes.

You took a pretty big step up taking on running Room 104. How did you cope with that? Did it feel like a natural progression from Togetherness?

I have a lot of “holy shit” moments when I think about what I get to do for a living and the amazing team I get to lead but on a day to day level, my progression on Room 104 has felt natural. Definitely not easy, but it has felt organic. I feel incredibly lucky to have the trust of Mark, Jay, and our other producers, and to have the opportunity to step up and lead the team. It’s a lot of responsibility, but I try to focus on the storytelling and making sure everyone from the actors to the directors to the crew feel supported and it feels much more manageable.

Speaking of Togetherness, can you highlight some of the differences in production between it and Room 104, and the unique challenges of Room 104?

To me, the most obvious difference between the two shows is the moving around, or lack of moving around on Room 104. On Togetherness, we shot all around Los Angeles. We’re very spoiled shooting exclusively on a stage for Room 104!

Can you tell me a bit about how Room 104 episodes first come together? I have an image of Mark coming into a room with the other producers and reeling off a years-worth of ideas from napkins, and everyone else going “yes; maybe”; or, “No, absolutely not Mark, what is wrong with you!” I assume it’s more collaborative than that though!

That’s not too far off! Our creative sessions take place in the attic of the Duplass Brothers office, a room that’s often used to crack story ideas. Someone usually brings donuts. And we either start by going through ideas on a list we’ve had going since before Season 1—a sort of idea waiting room, where we put ideas that aren’t quite ready yet or we haven’t had the space for. Or someone will say, “What about an episode about a prank call?” And we’ll start building off of that. We try not to shoot down ideas before we’ve explored them, as crazy as they may be!

Are there any ideas you’ve had to abandon due to budgetary constraints that you really wish you could have made?

There are many! I don’t want to get into specifics because we always hope we can find a way to make them work in Room 104 or some other space but we love letting our minds wander to wild places because something more doable usually comes out of it.

Is there an episode, from this season or previous, that you’re particularly proud of, or happy with? Can you tell me a little about why?

Without picking favorites, one episode that I’m particularly proud of is “Jimmy & Gianni“. This episode started with Mark saying he wanted to make a documentary episode about father and son artists. I thought it was crazy at the time, and probably even told Mark it was crazy. But the idea of diving into something without knowing what was at the bottom was really exciting. Even after we shot the episode, we knew we had something but we weren’t quite sure exactly what it was. Then our editor Laura Zempel really brought out the soul of the episode. And it became a really special piece because of how truthful and earnest it is.

Room 104 has a fairly swift production and filming turnaround compared to other shows and sometimes—from what I’ve read in other interviews—a fairly loose approach to script. How do guest writers and directors react to this?

Actually, because of the velocity at which we shoot, we do stick pretty closely to the script once we’re on set. We allow room for actors to find the right way for them to say their lines, but we don’t do a ton of improv. Overall, everyone seems to appreciate the boundaries the room provides because it’s freeing in so many other ways. In terms of shooting speed on set, I don’t think any director would say it’s not rigorous. To be able to shoot quickly without sacrificing quality means that everyone is firing on all cylinders.

The show has always experimented with different genres and styles, but Season 3 seemed to lean into experimentation a little more. Was that deliberate?

It was definitely deliberate. Thank you for noticing! One of the big challenges of a show that’s set in one room, especially a motel room, is keeping it from getting stale or boring. We don’t want viewers to watch and feel like they’ve seen an episode before. We have a great advantage in that the first few minutes of every episode have an inherent suspense. What’s this episode going to be about? Who are these characters we’re meeting? In order to keep that up, we have to keep pushing ourselves creatively and take more risks.

For me, the more experimental episodes, like “A New Song” and “Jimmy & Gianni” are the most impressive, but I’ve seen criticism from viewers who just want another “story of the week with a twist” kind of episode. Do you give any consideration to what the viewers may want or do you just embrace the diversity and hope that everyone will be happy with at least a few episodes?

We know we’re not going to please everyone with every episode. If we tried to do that, we’d be limiting ourselves in terms of the stories we could tell. We love that there’s a discussion around episodes, especially the more experimental ones because it means people are engaging. One of my favorite things to ask people when they say they watch the show is what their favorite episode is because it’s different for everyone.

Can you explain “A New Song” to me in one paragraph? I’m kidding, but there’s a story of a failed relationship on one level, but then what seems to be lots of layers underneath which are harder to pin down, possibly relating to her childhood development. Any help you can give us? My article covering it was a lot of “Well maybe this means this…”

We love that you’re trying to figure it out! We also view it in a lot of different ways and each have our own take. I see the shadow as her perception of her ex and the power she has given to it to let it stand in her way and hold her back. Once she strips away all that power, she’s able to see her ex as a real person and begin to move on.

“Specimen Collector” (Episode 12). The set decoration on this is pretty elaborate. Were there discussions around how to achieve this realistically within budget? Did it take longer than usual?

There were many discussions around how to achieve the look and feeling we wanted without blowing our budget. Our incredibly talented production designer, Jonah Markowitz, worked with construction, a greens team, and the art department to fill the space with live plants, lots of dirt, and an assortment of fake plants. Because of our budget constraints and fast shooting schedule, they had from the time we wrapped the previous episode on a Friday night until Monday morning to completely transform the room. It was quite a feat.

This was Mel Eslyn’s first episode as both writer and director (It was a pretty impressive debut I thought!). Can you share a bit as to how this story developed, and Mel taking on the directorial role?

We agree, it is a very impressive debut! Mel is someone Mark and Jay have worked with for a long time in multiple capacities–first as an assistant director, then as a producer, and now as the head of their company. The episode is an idea that Mel came up with and we immediately fell in love with. We’re always trying to push the limitations of the space and turning the room into a jungle was really exciting to us. In addition to having a writer’s and producer’s brain, Mel has a director’s brain and was clearly the person to bring the world of this story to life.

Can you give us any hints as to what Season 4 will bring?

Seasons 1-3 of Room 104 are available to view on HBO and we should be seeing a Season 4 sometime next year.