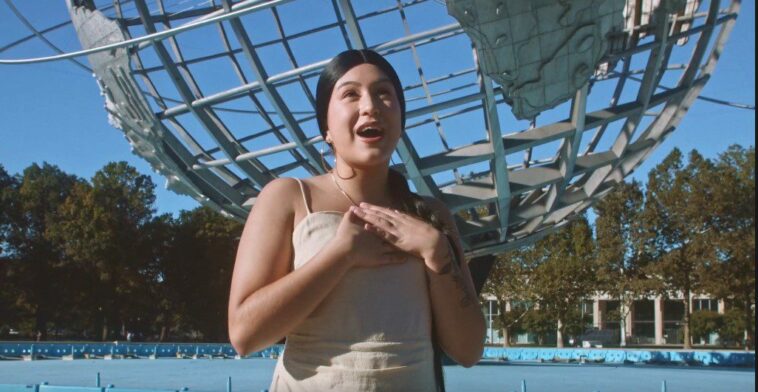 KAYA is a Filipina rapper, poet, and musician based in Brooklyn, NY. This week, she released a music video combining two of her songs, “Harana” and “Half Free” (ft. Kuya).

The first half of the video, “Harana,” depicts KAYA serenading and then dancing with Kuya. As KAYA explains in her liner notes (see below), the name “Harana” refers to a traditional Filipino practice in which young men serenade single young women. But in this video, KAYA has flipped it around: she plays the young woman serenading a young man. It’s her way of taking hold of a tradition in order to make it her own. KAYA’s music is an example of someone piecing together their identity and claiming their place in the world by collaging cultural traditions with lived experience and contemporary sounds.

KAYA’s voice is sultry and deep (when I first listened to her, I thought of T-Boz from TLC). She raps like a crimson stream of poetic speech; her flow is hypnotic and steady, and she leaves room for the listener to breathe. And she’s funny; I cracked up the first time I heard her say, “Ugh!” in “Harana,” and watching her spin and smile at she “Ugh’s” at herself in the music video will definitely make you smile, too. But the “Ugh!” and the smile contain an important truth: sometimes, like it or not, we fall for someone, and all we can do is “Ugh!” and smile at our own powerlessness. Or we can turn it into poetry, as KAYA says, “I find sunrise on his chest.”

In the video, KAYA and Kuya dance in front of a large hollow metal globe; they wander and joyfully play in a dense layer of fog beneath a bright blue sky. The groove of both tracks is calm, soulful, and steady, and the combination of words and music with the sunny yet misty visuals creates a kind of hazy daydream. The video is simple, but it still feels like a cohesive world.

KAYA’s songs are introspective and seeking, but they aren’t self-absorbed; they tell the story of someone trying to understand her place in the world by seeking out the presence of her people and her culture in a land where they are, for now, only half free. And even though she self applies this term, she also asks the listener what it means (“Tell me what it mean, Tell me what it mean, Filipina half free”). I get the sense that she wants us to really think about what she is saying, rather than accept it without thought.

For me, KAYA’s political explorations and questionings are refreshing because they aren’t screamed; instead, they flow. There’s no rush and no pressure to find an immediate answer. These songs, as well as KAYA’s collages, open a window into a her process of self-examination, cultural excavation, and self-discovery. It is clear to me that KAYA is not only a rapper, musician, and poet, but an artist in the fullest sense: she is part historian, part cultural anthropologist, and part visual and sonic sculptor. She is creating herself by combining each of these facets with the inherent juiciness of being alive, of being a human being in a body in the world. It is a delightfully unexpected intersection and intermingling of elements, and even though some of the subject matter is serious, the music never takes itself too seriously. There’s a lightness and humor that permeates these explorations, which creates a balanced listening experience.

I am eager to hear (and see) what KAYA creates next, because it’s clear to me that she’s only just getting started. Follow her on Instagram, buy her music on Bandcamp or stream it on SoundCloud.