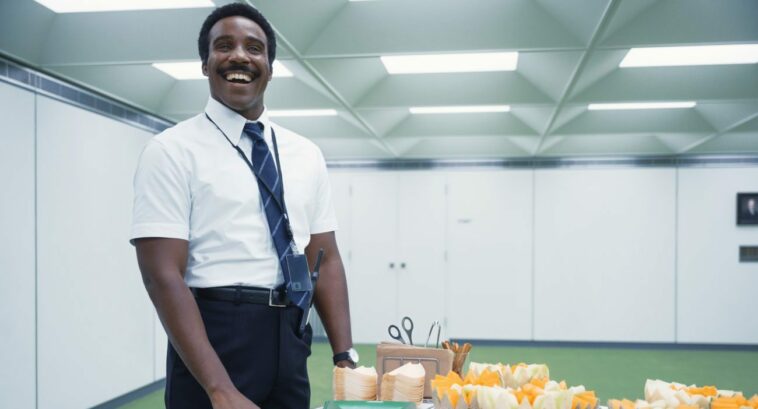 This week, Clay’s finally gotten around to watching Severance and Paul hypes Driven (2001). Check this space each weekend for recommendations from our writers. The things we tell you about won’t always be new, but they will always be worth your time.

(Unlike German chocolate cake, which is gross.)

Clay Dockery:  As so often has been the case, I am using this space to recommend I show I love but that I came to later than would have been optimal. Much to Caemeron’s chagrin, I’ve taken to calling this semi-regular feature “Clay is Late to the Party”. What a lark! Now on to the recommendation:

Dear reader, I implore you—as Caemeron has been shouting since the beginning—to please watch Severance. The Apple TV+ critical darling created by Dan Erickson and starring Adam Scott has been renewed for a second season and picked up a bunch of (deserved) Emmy nominations, but it is still woefully under the radar. After the Emmy noms were announced, I finally decided to figure out how to actually open my Apple TV app and give the show a try, and was immediately engulfed.

The essential premise of a shady corporation—in Severance that would be Lumon—allowing (forcing?) people to “sever” their memories of their work lives and personal lives is just the sort of high-concept premise to which I tend to connect. (Eternal Sunshine of the Spotless Mind is probably my favorite movie of the past 20 years for a reason.) But, much to the credit of Erickson and the creative team, Severance almost immediately starts moving beyond the basics of the premise.

We are introduced to the world through Mark Scout (Scott) and his “innie” (the semi-derisive term used on the show to refer to the at-work personas of the characters), Mark S., as he arrives to work on a particularly crucial day. Scott’s subtle shifts in his performance between the two versions of the character really set the tone. Mark S. both is and is not the same person as Mark Scout. Or even more interestingly, Mark S. is who Mark Scout might be if the baggage of his loneliness and pain were stripped away (the emotional backstory of why Mark decided to “sever” is a key thread throughout the season, but I recommend everyone watch the show to find that out) and the key thing is, it doesn’t make him better, or worse, it makes him a vessel for trying to parcel out his own understanding of the universe.

Each of the severed characters we meet are quite different, and their interactions are often quite hilarious, but they all have a basic mysticism about the universe that mirrors the deeper question the show is raising. Within the “Macrodata Refinement” department that serves as the home base for the show there are only four spots. One is filled by Mark S., who is promoted to department head in Episode 1. The others are Dylan G. (Zach Cherry) who is snarky and competitive, and enamored with the small trinkets and rewards that he gets for doing his job well, Irving B. (John Turturro) who has bought in most to the cult-like religious dogma Lumon spreads to the employees, and new arrival Helly R. (Britt Lower).

On that momentous day in the first episode we also follow the “birth” of Helly R. This is her first day as a severed employee at Lumon and she enters the world laying on a conference room table with Mark S. (on his first day after being promoted to department head) stumbling through an “intake procedure through a speaker. This off-putting experience will lead to some extremely dire times for Helly, but will also eventually bring the entre department together.

This odd and off-putting “intake” and the many other vague and ominous elements of the Lumon offices are entirely intentional. The fantastic production design by Jeremy Hindle only adding to the unease felt by the characters and the viewers. The “innies” arrive in this sterile environment and no effort is made to make them comfortable, they are not to be given freedom, they are to become the “children of Kier” (the messianic figure who founded Lumon) and their entire lives are tied and dedicated to his service.

The parallels to our meager existence and the controlling and contriving ways that religious and institutional figures dehumaize us are as clear and stark as the immaculately crafted production design on the show. We cannot know who we are because the metaphysical is cut off from us; in many ways we are severed too. But Severance does not force the characters to live and die in the dark. As they accumulate experiences they become more fully-formed, and as they do they start to challenge the world view they were force fed from “birth”. Ultimately, Severance, like life itself, is a story about the gradual process of enlightenment and the lengths the powers that be will go to keep us from getting there.

Paul Keelan: Driven is a notoriously (and criminally) maligned, high-octane car wreck of a movie you have to see to believe. Tracking the CART open-wheel circuit, Renny Harlin (an underrated auteur of wildly sloppy dad-movie extravaganzas) adapts Sly Stallone’s bloated script and delivers ADHD-addled thrills from start to finish. This thing peels out at 200+ mph and refuses to let you breath or think—only pulling over to recharge at a few well-timed soapy, melodramatic pit stops (ludicrously saucy moments punctuated by pouty-eyed moues, smooth jazz flourishes, and over-embellished dissolves).

If you’re down for a flashy, jam-packed spectacle of gonzo, over-the-top filmmaking with little emotional or narrative credibility, hop right in! This is the celluloid equivalent of an amphetamine-infused deep-fried Twinkie. This is Red Bull’s wings reincarnated on bitumen—reimagined on screen. Sure, it’s aesthetically grotesque and undeniably unhealthy. But it’s also seeping in fatty oils and salaciously delicious.