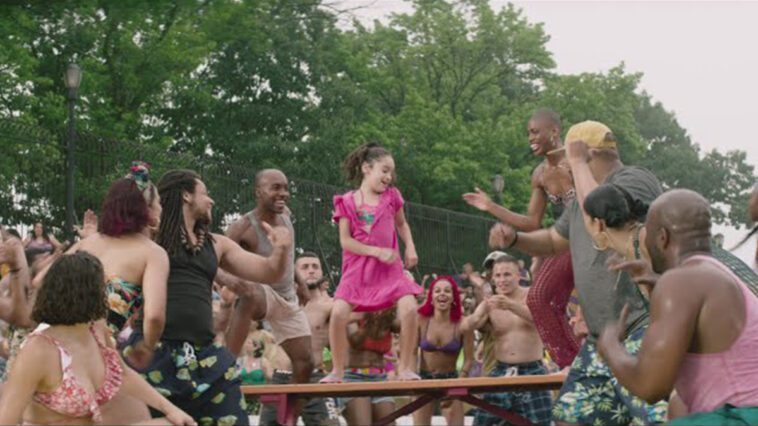 Welcome to What’s the Buzz, 25YL’s feature where members of our staff provide you with recommendations on a weekly basis. In our internet age, there is so much out there to think about watching, reading, listening to, etc., that it can be hard to separate the wheat from the chaff, filter out the noise, or find those diamonds in the rough. But have no fear! We’re here to help you do that thing I just described with three different metaphors. Each week a rotating cast of writers will offer their recommendations based on things they have discovered. They won’t always be new to the world, but they’ll be new to us, or we hope new to you. This week, Cat Smith is screaming over the In the Heights trailer, Stephanie Edwards is watching David Ehrlich’s “Best of 2019”, Abbie Sears is dancing to Rotimi’s Beauty of Becoming, and John Bernardy recommends another Watchmen podcast: Watching Watchmen.

Cat: The trailer for In The Heights just dropped, and my entire newsfeed is SCREAMING.

I grant you, my newsfeed is musical theatre nerd heavy, so we are a little biased. But I think everyone can be excited for this one. For those not already familiar, In The Heights was what got Lin-Manuel Miranda his first Tony Award, eight years before Hamilton was a thing. In The Heights won Best Musical in 2008, plus Best Original Score and Best Choreography. There’s been off-and-on talk about bringing it to film since then, and this summer, our patience is finally paying off.

In The Heights is one of those “slice of life” stories, and the main character is more the neighbourhood itself than any of the individual people. Washington Heights is upper Manhattan, and if you’ve never been there, it is a fantastic neighbourhood. It’s largely Hispanic-American, and it’s all pre-war architecture, bodegas, and big dogs (okay, maybe the big dogs are less prominent in the movie than they are in my brain). The story takes place over three days, and it’s told mostly by Usnavi, a bodega owner, and the narrator of the piece. Usnavi (named after the one of the first things his parents saw when they came to America from the Dominican Republic—a sign that said “US Navy”) was the role originated by Miranda, which got him a Tony nomination for Best Leading Actor in a Musical. The film version will see it in the more-than-capable hands of Anthony Ramos, whom Hamilton fans know as the original John Laurens/Philip Hamilton. Miranda will play the supporting (but very fun) role of the Piragua Guy, so he’ll still be around.

Usnavi handles the narration and the exposition (and a huge amount of rap, as per Miranda’s famous hip-hop style), but it’s very much an ensemble piece. There’s Nina, who left the barrio to go to college (the first in her family to do so), and has come back for a visit. There’s Benny, her boyfriend, who hasn’t left the neighbourhood and works for Nina’s dad’s taxi dispatch. There’s Vanessa, who is Usnavi’s love interest, and you can ship them extra hard when you remember that Vanessa is the name of Miranda’s wife IRL. There’s Abuela Claudia, who emigrated from Cuba as a girl, and who raised Usnavi, and is grandmother figure to half the neighbourhood. And there’s an entire barrio of gorgeous, sassy people of all shapes and shades, up in each others’ business, looking out for each other, and singing and dancing up a storm. We’re also getting Jimmy Smits, who has been a huge supporter of the show since the original Broadway run.

No, people don’t typically break into song that I’ve observed during my visits to Washington Heights. But they absolutely could do, and maybe this film will encourage it. And I don’t know about you, but I’m pretty sure it is going to inspire me to break out my Duolingo app and brush up on my Spanish (which I should be doing anyway). If this film lives up to even half the promise of this first trailer, it is going to have us all literally dancing in the streets.

Stephanie: As a pretty big film fan, I always enjoy when December rolls around and I get to start hearing about everyone’s favourite movies of the past year. One of the countdowns I look forward to is David Ehrlich’s “Best of 2019” video compilation, which consists of a super-cut introduction of memorable film moments from throughout the year followed by a Top 25 countdown of Ehrlich’s own favourite films. Ehrlich, Senior film critic for IndieWire, has released one of these videos every year since 2011 and each year the videos keep getting better and better.

This year’s video dropped on Monday, a week later than usual due to Ehrlich’s newest title, father of a newborn baby son, which left fans understanding about the delay but even more eager than usual. We got the first teaser for the video way back in August when he started working on it, so I’ve been waiting patiently for five months and, once the video was finally released, it did not disappoint. Without giving away any spoilers, the video features memorable moments from a vast array of genres; from big blockbusters like Avengers: End Game, foreign darlings like Parasite and Portrait of a Lady on Fire, and lesser-known titles like The Hottest August. The video has a little something for every film fan.

One of my favourite parts of Ehrlich’s yearly video is his combination of film and music, as he also cuts the clips to a selection of songs used in movies throughout the corresponding year. These music choices are nothing short of inspired, with past genius combinations that include tongue-in-cheek pairings, like Robert Eggers’ The Witch with George Michael’s “Faith,” and those that seemed destined to always be together, like Barry Jenkins’ Moonlight and Cat Power’s “Wild is the Wind.” I was not disappointed in this year’s music choices, with the pairing of Claire Denis’ High Life with the Disney ballad “A Whole New World” getting a laugh out of me every time I watch it, and the combination of Lulu Wang’s The Farewell with Jessie Buckley’s “Glasgow (No Place LIke Home),” my favourite original song of the year, pulling at my heartstrings.

If you are a film fan of any kind, I highly recommend checking out Ehrlich’s video and basking in the joy, the highs and lows, and the sheer amount of great movies that we’ve had the pleasure of seeing in 2019. Did your favourite of the year make the list?

Rotimi The Beauty of Becoming

Abbie: Yesterday was, in my house, the highly anticipated Friday that bought Rotimi’s new album: The Beauty of Becoming! I played the whole thing the second I got out of bed and then danced around my house to it for the rest of the day. It’s incredibly hard to top Rotimi’s last single “Love Riddim” as it was pure perfection, but this album brings that song back in a remix we’ve already experienced featuring Akon. How could you not love that? Something about Akon’s vocals match the vibe of “Love Riddim” in an amazing way.

In regards to “Love Riddim”, a video was recently uploaded to YouTube of Rotimi singing an acoustic version to the song and his natural voice completely blew me away. I probably love that acoustic more than I do the original, and I love the original a whole lot!

The rest of The Beauty of Becoming is just as sexy and funky as Rotimi’s other music. The sexy comes from the writing. Every track is definitely rated Explicit, but we’re completely okay with that. I have a particular favourite track from the album which is “Mega Love” featuring Afro B. Rotimi creates R&B tracks that stick to his Nigerian roots, and the mix of those two styles creates something completely unique. “Mega Love” is a great example. I’m always on the hunt for that unique quality in the R&B genre.

I came to know Rotimi the same way many probably did, as Andre Coleman in STARZ hit series Power. Dre is such a serious character, that it’s hard to picture the man behind him being as fun as Rotimi is. In a recent live stream Rotimi told us that he wanted to prove that he can do it all: he can act, he can sing, and he has a humorous side too. If you haven’t already, check out his Instagram for his videos as the character Mr Sexy Nigerian Butterscotch. It sounds silly, and well it kind of is, but I promise you’ll find it hilarious. Much like his Power co-star and exec producer 50 Cent, Rotimi really can do it all, and this new album just proves that even further. The new single “In my Bed” featuring Wale brings some excellent rap into Rotimi’s beats, and he has clearly gone all-in with this record. I’d say these tracks are on the same level of greatness as “Love Riddim”, because like I said, it’s a hard song to beat.

I definitely get a pop genre feel from some tracks, like “Fall Back” for example. But it’s a different kind of pop; it has a spin on it. Track five “All Night” is one that I think will stay in your head all day because it’s quite catchy and repetitive. Those types of tracks have a habit of making you sing them for weeks after you’ve heard them. It’s a good thing. Track six “Next to your Love” is really pretty romantic, with those signature sexy, graphic, Rotimi lyrics. It’s actually another favourite of mine, and Rotimi doesn’t hold back on the Nigerian dialect in this one, as he says, he is 100% Nigerian and he is proud of it. That song definitely stands out.

Overall, I love The Beauty of Becoming and I have already played it five times through. I highly recommend you check out his music, and while you’re at it, you can find Power on Netflix and on the STARZ app.

John: There are a boatload of Watchmen podcasts, all bearing similar looks and names, and to cut through some of the confusion, I’ll be reviewing one of them every week of Watchmen’s run on HBO. Who knows, maybe you’ll meet your new favorite podcast along the way.

This week I’m looking into Watching Watchmen, from One Drink In. Two hosts, Joe and Jim Bob, do a “quick” take early on Mondays with an hour-long episode, and come back sometime between Tuesday and Thursday with a wider scope of exploration. This week’s Episode 8 coverage came in at two and a half hours.

They go through scenes one at a time, skipping nothing. They’ll look at everything from the use of apples in appropriate stories (namely the Bible in that case), to the inherited trauma of Doctor Manhattan by way of Jon Osterman in Cal Abar. A particularly nice part of the listen came when the hosts make an explanation that Manhattan still has free will by being a puppet, who just happens to be able to see the strings. It’s a solid discussion.

In the last 40 minutes they dig into all the new Peteypedia entries. They’re completely sold on it now that they figured out the entries are part of their own stories like the Black Freighter was. They also go deep into the aspects of mind control we may or may not see in this weekend’s finale. And don’t worry, they go into Lube Man, Veidt’s actions over the years vs the lack of visible legacy, and they make a sandwich out of all those tomatoes, lettuce and eggs. See you next week, One Drink In.