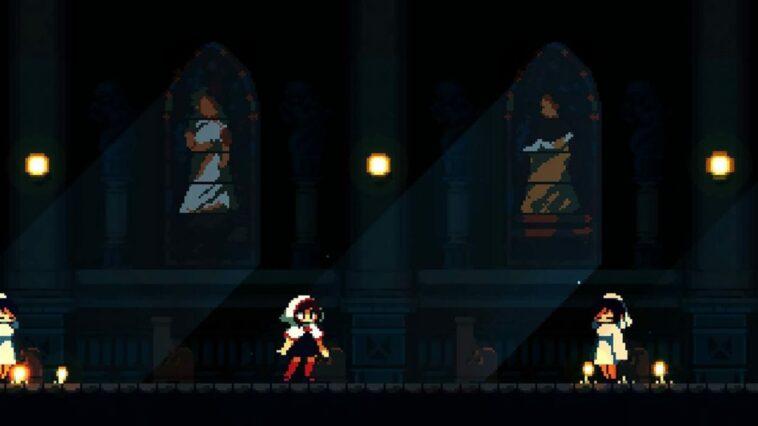 We all know that Dark Souls is a popular series. It’s easy to see why. FromSoftware’s output this past decade has offered some of the most challenging but satisfying RPGs known to man. Each one offers up gorgeously designed and interconnected worlds, intimidating bosses, and a unique atmosphere that mixes dread with sorrow. Each one has combat that’s precise, favoring positioning and timing over brute strength. But I’m not here to talk about those games today. Instead, I’m here to discuss a little game called Momodora: Reverie Under the Moonlight. Aside from it having one of the most obnoxious-to-say titles this side of Cadence of Hyrule–Crypt of the Necrodancer Featuring the Legend of Zelda, it’s also a wonderful, if short, game that doubles as a fantastic entry point for those intimidated by the SoulsBorne series.

What It’s All About

Momodora: Reverie Under the Moonlight is actually the fourth entry in a series of small indie games from developer Bombservice. After doing some research I learned that it’s a kind of fantasy/fairy tale setting, with the first three games in the series connecting to each other. And while I’m sure Reverie Under the Moonlight has some references to past games, I was able to enjoy it with no prior knowledge of the series.

Much like SoulsBorne games, Reverie favors minimalist storytelling, with vague exposition doing the heavy lifting. You play as Kaho, a young Priestess from a distant village who sets out on a quest to stop a mostly unexplained curse from spreading to her homeland. The nature of the curse, and what it does, can be observed as you play. The kingdom that serves as the game’s world has fallen into disrepair, with its residents turning psychotic or monstrous. It’s a ruined world where you can see how beautiful it once was.

The very vague nature of the story actually works in its favor, as it lends a melancholy tone to the whole thing. It’s not quite as dour as many of the SoulsBorne games, but it still manages to strike a quiet, sad chord that you feel throughout the journey. What little info you are given is often in the form of some of the game’s few friendly NPCs talking to you about their lives and some of the world’s history. It’s a fascinating tale that begs for deeper exploration, but isn’t quite as obtuse as some of the SoulsBorne games.

Another thing it has in common with the SoulsBorne games is how it often communicates to the player solely through visuals and sound. Often times, the only way to piece things together, be it story elements or how to progress, is by observing the absolutely painstakingly-beautiful environments. Details abound, with a simple but gorgeous visual design that usually makes necessary features, such as important item pickups, stand out.

There’s a solid variety of places for you to explore, like a garden, some underground dungeons, a cathedral, and a few others. Standard stuff for the genre, but it works well thanks to the visuals and sound design. You really get a strong sense of place, particularly from later levels, and you get the impression that this was once a bustling, busy kingdom undone by hubris.

The game is also a strong of example of why pixel art can’t really be considered retro anymore. The animations are just too damn good for it to be considered on the level of old NES or SNES games. Kaho herself animates with a startling fluidity, and at first this can be jarring since the combat is so reliant on precise animations. This doesn’t last long though, and once you get the hang of it the game controls and plays like an absolute dream.

To say that it borrows visual themes from SoulsBorne is an understatement. While the series has been around about the same time as the SoulsBorne games, this latest entry was heavily influenced by the grand but ruined architecture of Lordran and Drangleic. It’s more colorful, though, giving the game a distinct personality apart from the dour depths you plumb in SoulsBorne games.

Dark Souls itself owes a lot to the Metroidvania genre, only it took the formula and ideas and put it into a 3D space. Interconnected worlds, bosses that act as gateways to important items, and backtracking are all fundamental parts of the series. Reverie does the same thing, with mobility upgrades and better combat skills being integral to seeing the game through to completion.

It does a good job at easing you into things. Kaho, for reasons I don’t know, uses a giant leaf as her primary method of attack. Using this, you can perform some simple combos, as well as some air attacks. It isn’t long before you get access to a bow as well, and you can also roll for a few frames of invincibility. Your moves don’t evolve all that much beyond this (aside from a double jump), but these simple tasks can prepare an amateur player to dive in to the unforgiving world of the SoulsBorne games.

As I mentioned earlier, combat is animation heavy, with specific animations and openings for attacks. There aren’t a huge variety of enemies in the game, but that allows the developers to make each one a very specific kind of threat. For instance, there are creepy lamp maidens that wander around and have the ability to launch fire at Kaho. It’s best to get in close and finish them off, but you still need to watch out for their melee attack, so rolling to the other side as they’re winding up should do the trick.

The game uses its various bosses as a skill check. The first fight of the game is fairly simple. You fight this odd looking caterpillar thing that has only a small handful of attacks, most of them easily dodged. The thing is that, if you are hit by an attack, it’ll likely kill you in one hit since your health at that point is so low. This isn’t to put players off of the game early on. Instead, it serves to prepare them for the kind of combat they’ll encounter throughout the game. The first time I fought this boss, I died after a few moments. The second time, I learned its patterns and beat it fairly easily.

Later bosses make good on this mechanical setup, with each one having very specific moves that can absolutely decimate your health bar if you’re not careful. The brilliant part about it is that it never once feels like the game throws an unattainable goal the player’s way. The bosses can definitely be tricky, particularly later on, but it never feels unfair, or overwhelmingly tough, like the Ornstein and Smough fight from Dark Souls, or the fight against Sword Saint Isshin in Sekiro. It does a fantastic job of capturing the essence of the SoulsBorne games—measured, precise combat and exploration—but making it more accessible for people who might be turned off by the series’ reputation.

It’s also just a wonderful, short adventure. The game map isn’t the biggest, and there aren’t even a ton of upgrades to find. Sure, there are some spells that are fun to use, as well as health buffs, but it’s not exactly the most feature-packed Metroidvania out there. However, it also does not overstay its welcome, clocking in at about 5 hours. And despite the fact that there aren’t many game changing upgrades to speak of, you still feel much more capable once the credits roll than you did first booting the game up.

The short length makes it perfect to play in one or two sittings, maybe on a lazy weekend, and that makes it much more accessible than say, Dark Souls, which took me 55 hours my first time through. It offers a similar experience, only with a more concise, focused world. Its combat is simple, but still teaches players to watch out for enemy tells, and to only attack when they’re absolutely ready. Plus, it offers a similarly beautiful, ruined land, albeit a much smaller one.

At the end of the day, even ignoring the parallels to SoulsBorne games, Momodora: Reverie Under the Moonlight is just a really neat, laser-focused little game. Despite its short length, it’s worth looking into, even in an industry inundated with other fantastic Metroidvania games like Hollow Knight and Steamworld Dig 2. It manages to bring plenty of elements you’ve seen before and combine them into something beautiful, melancholy, and challenging all at once.

Momodora: Reverie Under the Moonlight is available on PS4, Xbox, Switch, Windows, and Mac OS.