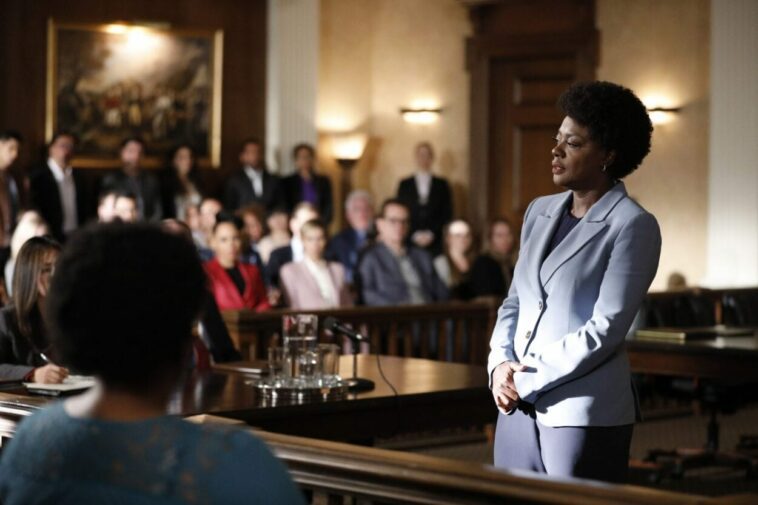 When How to Get Away with Murder was added to the ABC Shondaland docket in 2014, it was a fresh, soapy, mysterious drama starring the legendary Viola Davis with killer (pun intended) plot twists. However, over the course of six years, what felt fresh became stale, what felt soapy became overly soapy, what was mysterious became frustrating, and its killer plot twists became either predictable or just plain bonkers. Really, the only thing that was still working in the last two seasons was Viola Davis as Annalise Keating—and what a feat it must be to carry a show. So, imagine my surprise when the How to Get Away with Murder finale, “Stay,” managed to hone in on what made the show good and turn in its best episode in years—all without a time jump! (Which, if you’ve read my thoughts on The Politician and Weeds, you know I have a love/hate relationship with.)

How to Get Away with Murder usually starts off with a bang and then jolts you back to a predetermined point only to eventually give you the full context (i.e. victim) of the bang. This is very much the case in the series finale, where we start off with gunfire outside the courthouse. Immediately, we go back to three days ago…but now with renewed questioning into whether or not Annalise is dead. This has very much been the final season’s central question—along with whether or not she will be found guilty in the multiple charges of murder brought against her.

Those are both fine and dandy, and I care enough for Annalise that I do care what happens in both those respects, but this is not exclusively the Viola Davis show (sadly). We’re also dealing with:

Oh, and there’s also this running “is Wes actually dead” plotline…so, yeah. There are a lot of plates spinning which is kind of why the last two seasons of the show have been less than desirable most of the time. That does—and doesn’t—really matter in the How to Get Away with Murder finale, though, because “Stay” somehow manages to give closure to their current plotlines while also giving the characters some sort of overall closure. It’s a large feat and showrunner/creator Pete Nowalk manages to do it here.

Part of the reason why this is pulled off is that this episode hones in on what is at the heart of the show, or really what characters the fans care about the most. For the sake of argument, those characters are Annalise, Connor & Oliver, and Bonnie (in that order).

In Bonnie’s corner of the world, she’s babysitting Frank (you know, as much as you can babysit a grown man). She has unburdened herself from keeping the secret of Frank’s biological parents by actually telling Frank he’s the product of Sam and Hannah Keating incest.

Bonkers plot twist aside, Bonnie has always been one for self-destructive actions (remember when she killed Rebecca?), but she has also been the driving force in cleaning things up. We have a nice little moment with Laurel and Bonnie in which Laurel tells her that it was “always you who kept us safe.” It’s cute but also true. And as much as there has been this back and forth between Laurel and Frank, and Bonnie and Frank, the most interesting pairing has always been the platonic intimacy and power dynamic between Annalise and Bonnie.

My only real complaint with the How to Get Away with Murder finale is its treatment of Bonnie’s ending. She dies in the arms of Annalise after being shot by law enforcement in the crosshairs of them shooting at Frank—who shot the governor. Frank and Bonnie both die from their respective gunshots in a Romeo & Juliet-esque ending. I’m fine with Frank dying, I am, but Bonnie dying hits differently.

How to Get Away with Murder put Bonnie through just about every kind of trauma imaginable, and she doesn’t get to live? AND she dies trying to save someone else? But on the flip side, I think it’s also fitting that someone big dies in the finale; that does feel like something from the Shondaland series finale playbook, but why couldn’t it be someone we cared about less like Gabriel? (Sorry Gabriel.)

Connor is looking to own up to the mistakes he’s made and wants some actual honesty to come out of this situation. Oliver basically starts hyperventilating during this whole thing and tells Connor he’s going to have to divorce him if he wants to do that. This shuts Connor up—for a moment—until Connor hands Oliver divorce papers and says he’s going to jail…after Oliver gets the FBI to sweeten the deal for Connor with no jail time. Because, y’know, Connor is stubborn. After Annalise is proven not guilty on all counts(!), Connor goes to jail and hands Oliver his wedding ring, and in maybe the most heartbreaking moment of the episode (sorry Bonnie) he thanks Oliver for teaching him how to love.

But all is not lost. In our flashforward to Annalise’s funeral (after she has lived a long, fulfilling life), Connor and Oliver are back together and holding hands. Which is a win for the Coliver shippers but also a win for queer representation on TV. Sure, life is messy, but happy endings also exist after years of trauma. Connor and Oliver (and Annalise) get to be these messy queer characters on television who all eventually find some semblance of a happy ending.

Your Favourite Person in This Show: Annalise

And now the heart of the show: Annalise. After the court finds her not guilty and Bonnie dies and Connor goes to jail, we see a flashforward of Annalise’s relationships (one of which is Tegan!) and end on her funeral where Eve (Famke Janssen) is giving her eulogy. But before that, we get a monologue by Viola Davis that is some of her best work. She talks about the masks she has had to wear throughout her life as a Black, bisexual woman in order to find success in the workforce and also in her personal life. She has gone through tremendous loss, battled alcoholism, and battled herself. She’s not a good person, but she’s not a mass murderer like she’s being made out to be.

In the last 10 minutes of the How to Get Away with Murder finale, we have Eve giving Annalise’s eulogy in aged-up makeup, which somehow makes her look the same age as aged-up Connor, Oliver, and Laurel? I’m not a mathematician, but that doesn’t add up. But inaccurate age makeup aside, the last 10 minutes are the most powerful in the episode: Eve gives a eulogy about Annalise that is beautiful and complicated, much like Annalise was, and in doing this she also offers a glimpse at her legacy.

In a callback to the pilot, we see Wes’s son (also played by Alfred Enoch) ride a bike through the Middletown campus, enter the classroom, unzip his bag Annalise-style, and welcome students to class. He does so in a warmer manner than Annalise but still calls his Criminal Law class “How to Get Away with Murder” like “his mentor” Annalise did in the pilot. He sees an image of Annalise watching him from a desk that fades out in a moment that has brought me to tears both times I’ve watched it. It’s truly *chefs kiss* beautiful.

Part of what makes the How to Get Away with Murder finale successful is that who we were led to believe was Wes was actually his son, Christopher. What starts off as disbelief turns into something more logical, which is this series finale’s largest achievement. It took all its unbelievable plot twists and turned them into something more logical. This soapy murder-drama format and these weird incest twists and turns all reached a conclusion and the endings of each character brought us something from their essence. The show went back to basics and let its characters live somewhat uncomplicated lives after law school.

And maybe what’s most comforting to take from this in our current moment is that after chaos, for the lucky few of us, there is calm. There is success. There is healing. There is change. And there is love.

how to get away with murder

More From: Art of the Finale