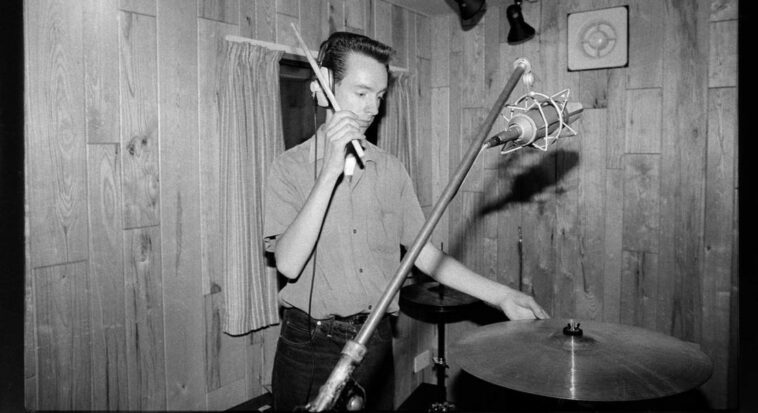 Michael James Pollard takes my photos. Well, he used to when I was an actor. I thought I might have some new photos of my new face (long story) done recently and he was the only photographer in mind.

And he told me an extraordinary story. A story of being discovered. 40 years late.

“I’ve just checked, it was March last year.” He still sounds amazed. “I got a phone call, he doesn’t actually say who he is, he just tells me he’s bought a cassette, he found it in a charity shop in London and it’s got my name on it.

I was very confused because at the time when I was a student, I’d been burgled a couple of times and I got into the habit of putting stickers on things. I said ‘Who’s it by?’ he said ‘Well, I assume it’s by you’.

I sent out only a handful of cassettes when I was a student back in 1981, I was in my 2nd year at Manchester Polytechnic. I was recording in the evenings because I lived with a band—I used to be sound engineer—so after Poly I’d do my own stuff. I played everything myself, I had a Casio that was also a calculator—”

“I’ve still got it!—Anyway, I asked him what was on it, he’d said there are four tracks, started to name them and I was completely gobsmacked, I just didn’t know what to say.

I know definitely I sent two (cassettes) to the BBC. I was cleaning my cupboard here and I found a letter from John Peel thanking me for sending that cassette. And I found one from the Kid Jenson office as well! So I can only assume that’s where it had come from; it’s still a mystery.

He said it was fantastic, I said ‘thank you’ and I thought that would be the end of it. Then he says, ‘I’m also from a record company’—this is like the stuff of dreams!

He said he’d give me the website address of the record company to check them out and he said, ‘We’d like to put something out on vinyl, what do you think?’ Well…yes please!

That started the ball rolling with this company, they’re called Emotional Rescue, they decided they wanted to put out a 7″ single (which is available from their Bandcamp page). He asked me if I had anything else and I’ve got tons, I’ve recorded everything.”

But the Michael James Pollard and Sioux Goddard album I bought recently was Revolution, recorded with Sioux Goddard. It’s a rather special album, even taking the time capsule feel into consideration.

This is never bombastic braggart of an album, it’s quietly lovely and frequently beautiful; the synths bobbling at the back of opener ‘Have I Left It Far Too Late’ with a barrelling Smiths feel in the chorus.

Then ‘He Is Very Young’ has the fast, precise riffing of Haircut 100 and ‘I’m Always Crying But I Don’t Know Why’ walks an empty club stage and then ‘Shallow Fool’ at times sounds like a grubby version of ‘Avenues And Alleyways’

This ’80s album is not of its time, it’s absolutely now. That’s because the music comes back, of course, but it’s because this music holds sweetness at its soul.

“I recorded an album in the ’80s which never got released,” Michael explains. ‘It was recorded through Factory Records with Lyndsay Reade who was Tony Wilson’s ex-wife, she’d been tasked with overseas development. So I was remastering this stuff, sent it to the company in London, they chose one of these tracks and one of the songs from ’81, A and B side.

So I was left with all this stuff I was working on and actually getting quite excited about, and I was talking with Ian Runacres who’s with Dislocation Dance (influential late ’70s and ’80s band who are back), they’ve just put out an ep on German Shepherd Records, he said, ‘why don’t you send something to the label?’

They got back and said they liked it and they’d like to do something. So that set the ball rolling of putting the album out.

I’d never really been happy with it, so it meant I could remaster it properly—some of the songs were overlong, so one of them I just chopped in half!”

“The last track on the album (‘I Doubt Myself’), I was never happy with the ending, it just petered out, so I put atonal guitars on and brought it all to a massive crescendo.”

And the album has a real ’80s feel but does more than that, there’s an angular feel too which is absolutely on point. Nothing ever goes away and everything comes back, doesn’t it?

“In 1971 I bought the first Faust album and the same year I also bought T-Rex Electric Warrior; that kind of sums up where I’m at. I love great classic Pop and chaotic, cut up, all the stuff with Faust, Can and between them the Fall occasionally were bridging those two things as well.”

Does it all being back good memories of recording, then?

“We were rushed into it in a sense. We were really excited to have a chance to go into a studio—we were there for two weeks!

But of course I was playing every instrument, the guitar parts are very odd, I often only play two or three strings, people say ‘what do you play then?’ I’ll play anything, but I can’t play anything really, whatever I need, I’ll pick it up and play it, the only thing I felt comfortable on was the drums.”

That’s interesting, the rudimentary nature of Michael’s playing, in fact not even playing, just being able to work out what he wants, means that he doesn’t put in stuff that might not be needed. Michael Pollard does just what serves the song.

“Cos I can’t play it! I write my own songs, I can play them, that’s all that matters. Of course Punk came along and blew all that open; I just wanted to create songs.

The way we wrote (for the album) I would write five minutes of stuff, there was often no chorus, then I’d hand it to Sioux (Goddard, wonderful voice and lyrics on the album) on a cassette and say ‘right, can you turn that into a song now?’

She was the one who wrote all the melodies, she would write lyrics all about her own life and often in real time, literally about that day. I’d never heard lyrics that were so honest before.”

When I was telling Michael of the day the article would be finished, as the days slipped because other things got in the way, he messaged me to say he’d been waiting 40 years already so he didn’t mind. But now it’s here!  Michael Pollard’s album and 7″, I mean…

“I’m so glad I’ve been able to revisit it and finally get it out. It’s doing OK, German Shepherd are a terrific label, I can’t thank them enough, we get regular orders in, people are downloading it—I’m probably not going to hit the charts just yet, not with Adele out!

It’s given me the real push to get new stuff done now. I can’t jam and work stuff out, effectively I’m jamming with myself, it is going to sound different, the one I’m working on at the moment, it’s very string heavy, they’re going quite dark, the songs.

Kathryn (Way) who used to be in Dislocation Dance is singing on it and my son who can actually play and read music, I can’t do any of that, I asked him to do Mike Garson (great Bowie collaborator and much more) atonal Jazz fills and my daughter, Who’s also a great musician, I’m going to get her to do some violin.

The single that we’re working on which will be released next year hopefully is that we’ll do the full version with instrumentation and then do another version which is effectively instrumental but it’s not just the same song without the vocal, it’s got more instruments on it. It’s going to be great!”

Such an odd situation has created so much work and a new blossoming.

“I’m so excited! I can’t quite get over it all. I thought. ‘one day I’ll be discovered, it’d be so cool it if happened—it’s never going to happen…’ And then it happened!”

There’ll be an EP before Christmas apparently which will be out on German Shepherd before the end of the year. When musical fame didn’t happen, Michael Pollard just lived his life.

He found things he loved and lived a life he loved too. Now this success has come along at just the right time; this isn’t the be all. Or the end all. It’s not all. It’s a lovely extra.

And now he has the life experience to enjoy it. 40 years on.