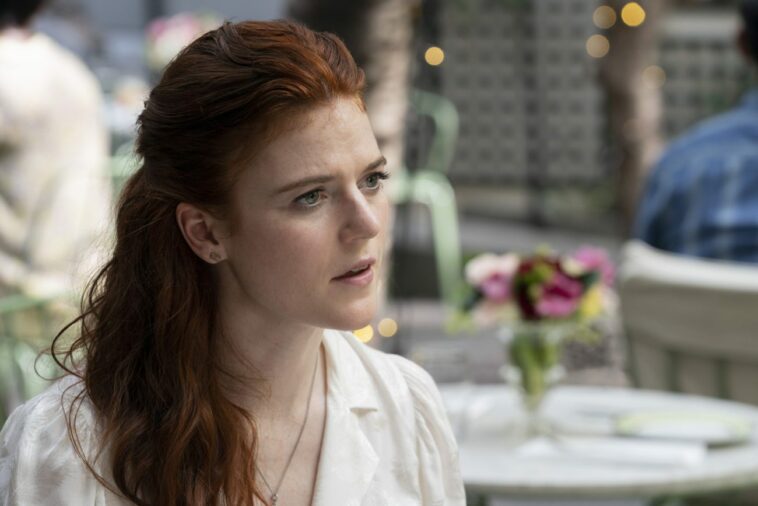 There’s not much to say about the finale The Time Traveler’s Wife. It’s a long episode that splits its time between the present-day wedding planning for Clare (Rose Leslie) and Henry (Theo James) and various future times that Henry crashes into. Stress and anxiety cause him to time travel more regularly, and with the wedding on the horizon, he time travels every night. Each instance of time travel is to the future, because that’s what he’s anxious about.

The episode has a series of tangents that are quite forgettable. The audience is given half-hearted glimpses into the relationship between Clare and Henry. All in all, as finales go, it’s quite lackluster. But that’s to be expected based on all the episodes that came before it.

Much has been made about Henry’s upcoming death. He assumes he dies sometime around the age of 42 because he’s never met a time-traveling version of himself older than that. On his wedding day, Henry asks his father (Josh Stamberg) if he would marry his mother again, knowing that she would pass away long before him. His father says it was worth it because without her, he wouldn’t have had Henry and that children make life worthwhile.

In one of Present-day Henry’s impromptu time travels, he ends up in the future when Future Henry and Future Clare are trying to get pregnant. That’s not exactly true, however, because Henry had a vasectomy without telling Clare. Younger Henry overhears this and picks a fight with Future Henry. In the middle of the fight, Future Henry time travels back to the wedding day and Younger Henry watches the video footage with Clare. After watching the entire ceremony, Future Clare realizes that this Younger Henry hasn’t had a vasectomy yet. It’s heavily implied that the two have sex so Clare can have the child she’s dreamed of.

It’s hard to know where to begin when talking about The Time Traveler’s Wife series as a whole. Hundreds of words in these reviews have been written on the core issue of the series: the romantic relationship between Henry and Clare. After watching the full season, there’s no longer anger on the reviewer’s part about the inherent creepiness of the relationship. Instead, what’s left is genuine confusion about the purpose of the show. The Time Traveler’s Wife is not a love story, it never was a love story. It’s the story of a man who manipulated and molded a young girl’s life under the guise of romance. It’s baffling that this story has ever been seen as romance, when the scenes between Clare as a child and Future Henry are so off-putting.

If it’s not a love story, then maybe it’s a plea to be present. To notice the world around you and smell the roses. To take time to appreciate the nowness of any given moment and really live in it. If that’s the case, the show failed there as well. In almost every present moment, Henry is complaining about the people he’s surrounded by, the annoyances of time traveling, or just checked out mentally. In the scenes leading up to their wedding, when Clare is asking his opinions on flowers and dining set-ups, he is utterly uninterested. His actions are the opposite of his words. Throughout the series, Henry continuously makes the claim that the present is all he has, yet he throws it away every chance he gets.

Perhaps the show is supposed to be about friendships and how they are an essential support system. If that’s the case, why did the series never address the fact that Gomez (Desmin Borges) and Charisse (Natasha Lopez) cheated on each other with Clare? Surely that must have come up at one time or another. It’s an impossible secret to keep and a storm that most relationships cannot weather. Yet The Time Traveler’s Wife had no interest in exploring the repercussions of their actions.

In all honesty, it has been a struggle to find meaning within this series. To find even a glimmer of purpose within the roughly six hours of television. The only real lingering feeling left is a sadness for Clare. This is a woman who was told secrets about her future from the time she was six to the time she was 18. She is given glimpses into what her life would be like, but never allowed to make her own choices. Nothing Clare does after she first meets Henry is done on her terms.

This is a fundamental issue that bears repeating and cannot be overlooked. Henry’s actions are selfish, there is no way around it. There is nothing that requires him to have a relationship with Clare as a child. No otherworldly force that coerces him into that choice. It is his decision entirely to effectively take over Clare’s life. By making himself a recurring figure in her childhood and teenage years, he cements himself as an important figure in her life. Henry even admits that some periods in time are like a gravity well that he keeps returning to, so it’s not outside the realm of possibility to say that he knowingly goes back to that clearing to see Clare.

However, these times in the clearing only hold importance because he manufactures them. If we believe in alternate dimensions or timelines, there is a world where Clare grows up without Henry. She has 20 years of not knowing about the existence of this man before she meets him in a library in Chicago. Had they met then, they would have been standing on equal ground, both free to make their own decisions about their lives and their feelings toward one another.

Do Clare and Henry only end up married in the future because Future Henry went back to insert himself into Young Clare’s life? As with all time travel stories, this one convoluted and twisted in a way that makes your brain hurt the longer you think about it. This particular question will remain unanswered.

Another unsolved mystery is the threat of Henry’s death that is alluded to in many episodes throughout the series. In both the book and the 2009 movie, Henry dies at the hands of someone in Clare’s family. It’s the result of either Clare’s brother (Peter Graham) or father (Michael Park), depending on the medium, shooting Henry accidentally while hunting elk. The book and the movie also show Clare and Henry’s child, Alba. She can time travel, but unlike her father, she has a moderate amount of control as to where and when she travels.

For a story that already has a novel and a feature film, it’s a little surprising that The Time Traveler’s Wife series stayed so close to the source material until the last episode. The extended length of a series gives them more room to explore these characters, but instead it was a rehash of well-trodden territory. A better adaptation could have changed the problematic dynamic between Henry and Clare, given more depth to Clare’s life, and showed the struggles of Alba as a second-generation time traveler. Instead, the audience is left with a meandering attempt to tell an expansive love story that lacks any trace of romance.