Welcome back! It’s time for another edition of Larks & Recs, wherein you’ll find recommendations from our esteemed group of writers and the occasional lark into foreign territory. This week, Hawk Ripjaw is watching Tulsa King, Clay Dockery discovers some new music, and Robin Moon is revisiting BoJack Horseman.

What have you been into lately? Let us know in the comments!

Hawk: I’d known about Tulsa King and figured I’d eventually get around to watching it, but when browsing the Paramount+ app for something to watch, I was surprised to find the show filed under Comedy. I’d assumed offhand that Taylor Sheridan (Yellowstone, Wind River)’s latest to be as generally serious and even bleak per the usual, but as it turns out, the show (with showrunner Terence Winter of Boardwalk Empire fame) is surprisingly entertaining and often very silly while also spinning a compelling narrative of a former made man rebuilding an empire from nothing. It’s more of a drama-comedy than anything, but it’s nothing if not a lot of fun.

Dwight Manfredi (Sylvester Stallone) has just gotten out of prison after a 25-year sentence for murdering someone for his crime family. Instead of being welcomed back into the fold and rewarded for his silence, Dwight is instead sent to Tulsa, Oklahoma to establish a criminal enterprise. Dwight considers this a slap in the face but goes anyway to a town in the middle of nowhere, equipped with the only thing he knows how to do: solve temporary problems with a little bit of cash and maybe a threat or two.

At least in the first couple of episodes that I watched, a lot of the comedy comes from Dwight experiencing the world after 25 years in prison. Things work differently now: you use an app to call an Uber instead of the hotel’s front desk to call a cab; the sale of weed is quite different than it was two and a half decades ago; and Dwight is, at best, disinterested in conforming his capo experience to a new world, particularly when it comes to business and the people he encounters, who are not ready for his hard-boiled swagger. When getting his picture taken for a driver’s license, Dwight instinctively turns to the side as if he were getting a mugshot.

Technology and decorum aren’t the only things that Dwight missed in prison: his estranged daughter weighs heavily on his mind, and he keeps with him a card she sent to him in prison many years ago, even after he instructed her to stop visiting him to save her the pain (although it was his own pain he was trying to avoid). Stallone’s performance as Dwight is attempting to reconnect with his daughter is heartbreaking, and these moments counter nicely with earlier scenes of comedy with Dwight rediscovering a marijuana high and going on a nonsense monologue with his driver Tyson (Jay Will).

I’m having a great time with Tulsa King so far: Stallone has found another role that fits him like a glove, and he absolutely nails it. The plot slowly unfurls as Dwight’s unmistakably potent influence grows his new empire, with plenty of very entertaining plot threads involving Dwight trying to understand his new environment through a mixture of charm, intimidation, and pathos. There are plenty of other pleasant and colorful characters that Dwight mingles with as well, and everything just sort of comes together in a colorful and compelling show.

Clay: I find it difficult to try new things. Some of my very favorite film franchises, books, and TV shows are ones that I passed up for years before finally breaking down and indulging. The area in which this anxiety is most prevalent, however, is music. I love the artists I love but I can almost never bring myself to listen to new ones, no matter how popular, critically praised, or similar to other artists I already adore. Lately, though, I have been trying to open up my musical experience a little, and I thought it might be fun to share my “new” discoveries here in Larks & Recs. I’m hoping to make this a semi-regular feature tentative titled “Clay Discovers Musicians Everyone Else Already Knows” (OK, the title is a work in progress).

Last year my friend C.H. posted in our Slack conversation about a Spotify playlist she created called “Buddy Meet the Boss.” She made it for another one of her friends who had never listened to Bruce Springsteen and this was to be the best possible way to get a quick but thorough introduction. I then realized, despite his being one of the most popular musicians on the earth throughout my entire life and despite (or because of) his early comparisons to Bob Dylan, I had never heard more than one or two songs by Springsteen. At least not consciously—it is hard to have lived through the ’80s and ’00s without at least encountering “The Boss” from time to time.

And so, I opened up Spotify and started listening. And then I couldn’t stop. (I’ve probably listened to the playlist 100 times by now—C.H. cultivated a great one—and it is my biggest recommendation here. Check it out!)

Apparently, Bruce Springsteen has made some good, and emotionally affecting, songs. After the playlist, I started a deep dive into the Springsteen catalog and there are some really incredible songs and moods on his early albums.

The E-Street band has a unique sound. The jazzy backing to the often sad and introspective lyrics would seem to clash but it almost never does. Instead, the effect is to feel like you are entering into a world where Bruce Springsteen is your guide through an electric fever dream of his own lost desires. Somehow, even back when he was 20, he sounded like he had been working the line for 20 years. And now, as he has grown older and only more adept as a performer, he plays that role to perfection. And if you want to cry, listen to the “10th Avenue Freeze-Out” from the Springsteen on Broadway cast recording, the way Bruce talks about loss and love for the “Big Man” Clarence Clemons, I think it will do the trick.

I’ve got to say, if you are (like me) someone who somehow avoided The Boss at least in part because of the hype, there are some truly amazing songs and albums to check out. Though even for a Dylanite like me who is used to distinct vocal tics, it is hard to understand exactly what Bruce is saying sometimes and there are some… less than great… periods. Overall though, Bruce Springsteen is a pretty solid performer and songwriter. Who knew?

I also invite you to join me next time in Larks & Recs as I discover that other little-known band from the ’70s, Fleetwood Mac!

BoJack the Horse — Don’t Act Like You Don’t Know

Robin: It’s been a few years since I watched BoJack Horseman—in fact, it was when the finale aired in 2020—and it doesn’t tend to be the kind of show you hurry back to. Don’t get me wrong, I’m not saying that because it’s not enjoyable. BoJack is one of the funniest, wackiest, and most deeply whimsical TV shows ever written. However, the constant theme and topic of the show is depression, and often it hits a little too hard in terms of relatability. I intended to rewatch it at some point, and my girlfriend (who hasn’t seen it before) recently suggested it, so that’s what got me back into it.

Although I remembered the show starting off significantly more light-hearted than where it progresses, I’d forgotten just how early on the heaviness sets in. I mean, the tragedy of Sarah Lynn’s nosedive of a career and lifestyle choices is covered in Episode 3. We’ve barely had a chance to settle into the comedy when we’re presented with tragic character backstories. But that’s what makes it so effective; the dumb jokes and overall goofy humour only make the ‘real’ moments all the more hard-hitting. 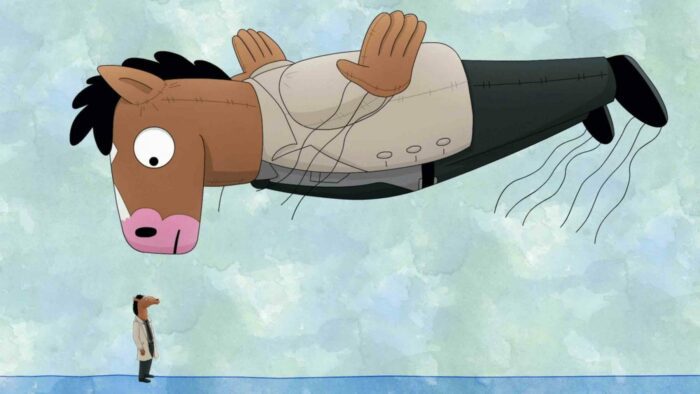 From the start, BoJack also presents an astute commentary on not only mental health, but personal accountability, toxic relationships (romantic, platonic, familial, and professional), Hollywood and the film industry, feminism, and much more. The fast pace means a lot of the satirical dialogue is very blink-and-you-miss-it, but I think the refusal to dwell on it or milk it to the point of condescension has a much greater impact. Creator Raphael Bob-Waksberg doesn’t overstep but manages to create meaningful plots and characters that stay rooted in your brain long after finishing the show.

Will I be able to watch BoJack all the way through again? I’m not sure. But will I continue to praise and recommend it forever? Absolutely.