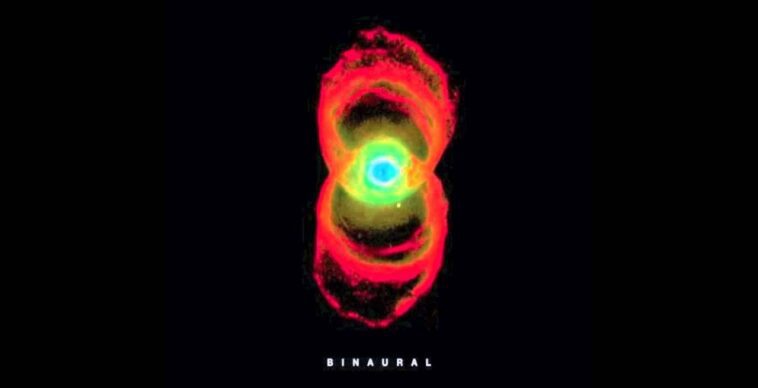 Twenty years after the release of Pearl Jam’s Binaural (May 16, 2000), I still think the album suffers a bit due to Tchad Blake’s muddy production. Punkier songs, such as “Breakerfall” and “Grievance,” feel bogged down and muffled by the heavy bass tone. It’s a shame you can’t always hear Mike McCready well in the mix because he really played his axe off.

But, the more I think about it, this record might have sucked with “better” production. Maybe this is exactly how it should sound, for such weird and dark content. The album is named after the binaural recording technique, which uses two microphones stuffed inside the ears of a mannequin’s head to create a 3D stereophonic sound. I can safely say this experiment was successful on a few songs, as I am frequently sucked in by their gravitational pull.

The younger version of me may have also been experimenting at the time, but I distinctly remember playing “Of the Girl” on a boombox in my darkened bedroom and feeling like I was trapped inside a tunnel with the band. McCready seemed to be pulling Hendrix from his grave with his guitar strings. Each note slithered through my body, creating a bond with my soul that I had no control over. To this day, I still feel like I share a symbiotic relationship with the song, and I’m quite okay with this. When Eddie Vedder sings, “How he makes his getaway,” he’s clearly referring to me pressing play.

“Nothing As It Seems” is a masterpiece you have to listen to on headphones. It will transport you to another planet (one you’ll wish you could live on forever). I’m certain McCready figured out intergalactic time travel during this recording; he just chose not to tell anyone. I can’t hold it against him. His jaw-dropping leads sound like he’s giving birth to 10 billion galaxies. This, juxtaposed with the way Stone Gossard quietly strums his acoustic guitar, is pure brilliance. I don’t think aliens could achieve perfection like this in a trillion years. To top it off, the song was written by Jeff Ament on his upright bass. This makes zero sense to me. What is happening here? Nothing’s as it seems.

Back on Earth, the Gossard-penned “Thin Air” is one of my go-to campfire jams. It has a chill, country vibe that I love, without being too twangy. It’s so soothing when Vedder lowers his voice and sings, “There’s a light. . .when my baby’s in my arms,” over just the bass and drums. Troubles melt away and I instantly want to hug my lady. I swear it has nothing to do with the wine I’ve been drinking all night by those roaring flames.

Another track they nailed the sound for was “Light Years.” This grief-filled tune is reminiscent of Soundgarden’s “Fell on Black Days,” but more hopeful. That band’s former drummer, Matt Cameron, somehow kept this rhythm both tight and loose. He is a wizard and the sticks are his magic wands. As a fan, it’s nice to imagine this song is about how awesome we are. “We were but stones, your light made us stars.” You’re welcome, guys.

Many people have dismissed this as a boring release, but that’s not fair. It was Cameron’s first studio appearance with the band, which alone is exciting. The grunge veteran added his own flavor to the Pearl Jam sound. You can thank him for “Evacuation.” Hardcore fans often place this at the top of their “worst of” lists, bashing its simplicity and silliness. I happen to enjoy it. It’s just plain funky. It makes me think of The Clash whenever I put it on, and that can never a bad thing.

It also has the distinct honor of teaching me the word “wanton” (a cruel/violent action that is deliberate and unprovoked). It’s interesting how Eddie wrote the line, “The sirens scream wanton attention.” It sounds like he’s saying “wanting.” I thought this for years, before noticing the correct diction in the booklet. No, the sirens do not want attention (though that works just as well during an evacuation). In my defense, this isn’t as bad as McCready believing the lyric to Kiss’s “Rock and Roll All Nite” was, “I wanna rock and roll all night, and part of every day.” That story killed me when I heard Eddie tell it on their Live at Benaroya Hall album. I remember thinking, “I’m not alone!”

Vedder’s ukulele number, “Soon Forget,” is entertaining too. I always chuckle when I hear the lines, “Sorry is the fool who trades his soul for a Corvette / Thinks he’ll get the girl, he’ll only get the mechanic.” Pete Townshend’s influence is undeniable, which is why Eddie scribbled “Thanks P.T.” on the lyric page.

I’ll admit, I’ve always found the dreamy “Sleight of Hand” to be equal parts depressing and inspiring. The words hit hard if you’ve ever found yourself at a job that’s slowly draining the life out of you:

Routine was the theme
He’d wake up, wash and pour himself into uniform
Something he hadn’t imagined being
As the merging traffic passed

It’s easy to hear this and think “F*ck, that’s me,” and sink further into a rut. It’s also possible to take these words as a warning and make positive changes in your life, so you no longer have to travel the same mundane road. The choice is always yours.

Pearl Jam made a clear choice on what they wanted to do with Binaural. It didn’t all work out for the best, but what did is light-years above other albums from the past 20 years.