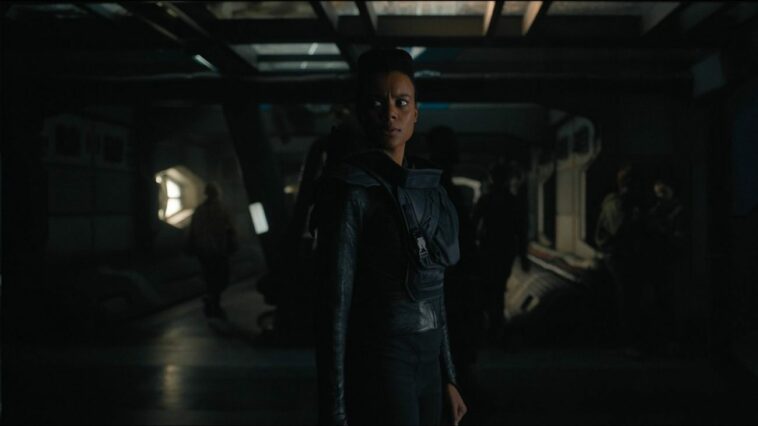 The following contains spoilers through Foundation S1E3, “The Mathematician’s Ghost,” on Apple TV+, and also references the Foundation series novels.

Welcome, dear reader, as we continue to review the Apple TV+ series Foundation with Episode 3, “The Mathematician’s Ghost.” Last week, the season premiere left us hanging on a serious WTF cliffhanger moment where Raych Seldon appeared to have killed his adopted father, Hari Seldon, and jettisoned his girlfriend and only other potential psychohistorian, Gaal Dornick, off-ship in a life pod. After a grueling seven days of anticipation, pondering and theorizing and fretting over those events, Episode 3 is final here and they give us…absolutely no answers whatsoever.

While my initial reaction was to grumble and gripe, I do have to respect a series that doesn’t play straight-up fan service. Foundation Episode 3 was a breather episode, reminiscent of Loki Episode 3, “Lamentis,” where we just hung out with Loki and Sylvie and got to know them better. This was a world-building episode, giving us better insight into the workings of the Empire’s genetic dynasty, and laying the foundations (so to speak) for Salvor Hardin’s role in the saga. It would seem that they want to establish an understanding that there is an 80-episode plan for this series. There’s a lot to get to, but we’ve got time. Answers will (I hope) be forthcoming.

The opening scene of “The Mathematician’s Ghost” doesn’t even start out in the series’ nominal timeline. We jump back 400 years to visit Cleon I and Demerzel, implementing his dream for the future of the Empire. Cleon is “in the near-darkness of [his] life” and fretting over his legacy, with so much still undone. He wishes he could see the completion of the Star Bridge with his mind, his eyes. Demerzel reminds him that his continuity is assured, and one day they will ride up to the orbital platform together and look down on all that they had made.

We return to the present, moving forward to 19 years after the Star Bridge bombing. These are the final days of Brother Dusk (Cleon 11) as he prepares for his “Ascension.” As with his progenitor, he frets over their legacy. He wants to salvage something of the Star Bridge platform, but his brothers “gift” him with its destruction, albeit with a promise to build something greater. He questions their purposeful ignoring of the “barbarian” worlds. He urges his tailor to “let the girl have the stage,” valuing the new and the different, per Hari Seldon’s admonishment. Too little, too late though.

Throughout it all, we see that Demerzel is the true assurance of Cleon’s continuity. She was there at the beginning and she will be there at the end. As their surrogate mother, she sings to the clones from cradle to grave, her position assured in an Empire that hasn’t always shown benevolence to her kind. Then again, in the final scene of this aside, we see the 17-year old Brother Dawn (Cleon 14) ordering the mural that Cleon 11 painted in his room to be wiped, as he has “outgrown” it. Nothing is assured.

After 20 minutes spent on Trantor with the Cleon clones, we move to Terminus to witness the Foundation’s discovery of the Vault, shortly after their arrival (approximately five years after the Star Bridge bombing). From there, we scroll through the next 30 years until we finally catch up with Salvor Hardin, Warden of Terminus, picking up where we left off with her in Episode 1.

A lot is made of Salvor’s “specialness” in this episode, to the extent that I’m starting to find it a bit troubling. If Gaal and Salvor ever do meet in person, they should hit it off like gangbusters. Both are outliers who grew up not fitting in with their community. Salvor even makes other people uncomfortable just by her presence. More worrisome though is how both seem to be evidencing psychic abilities. Salvor gets “feelings” about the Null Field change and perimeter breeches, in the same way that Gaal sensed the Star Bridge attack and Hari’s imminent death. And of course, she is apparently the only living creature on Terminus unaffected by the Null Field.

Overall though, the main impression we are left with is of her sense of duty to the Foundation, even though she does not consider herself to be a member. She is not a believer in the prophecies of Hari Seldon, but it is her job to “protect these people.” As her father says, she is better suited to the job of Warden than he was. That duty to her parents and the community keeps her bound here and prevents her from running off with Hugo, her Thespian boyfriend.

Following one of her intuitions, Salvor discovers a kid out after curfew. She gives chase past the Vault and into the scuttled slow ship carcass. Her pursuit leads her to Maple, the Bishop’s Claw that has been poking around the perimeter fence the last few weeks. After firing a warning shot, the animal flees through the ceiling, drawing Salvor’s attention to a strange glint in the night sky.

The glint turns out to be an Anacreon ship headed their way. Not just one, but three ships—armed corvettes. They are trying to evade detection and they’ve disabled the communications buoy back to the Empire. There can be little doubt of their ill intent, given that the Foundation is technically an Imperial outpost. The Encyclopedists have been preparing for some distant fall of civilization, but the real crisis is here and now, and they are ill prepared. The ships will arrive in just two days.

The next night, Salvor reenacts her discovery and pursuit of the “mystery boy” (per the credits), almost scene-for-scene. Once again, she comes across the Bishop’s Claw, but this time the beast is wounded. There is an arrow protruding from Maple’s side. After removing it and allowing her to get away, Salvor finds herself surrounded by Anacreons and we end with her asking them, “What are you doing here?”

To do a little theorizing on this week’s minor cliffhanger ending, it looks like this is an Anacreon hunting party. Recall that the Anacreon ambassador gave Brother Day a gift of a bow made of “the same wood used to carve the bow of Anacreon’s greatest hunter.” Hunting is apparently a big deal in their culture. Notice that the members of their group are all armed with bows, not guns.

Perhaps Anacreon has been coming to Terminus regularly to hunt Bishop’s Claw, either for sport or for ceremony. At least prior to the Imperial edict that forbade them access. Maybe this is their first test of the fading Imperial reach since the bombardment of their home world some 35 years ago.

The mystery boy could be some sort of projected hologram, intended to draw the beasts into a trap within the derelict ship. This may also explain why Maple has been testing the fence along the settlement perimeter. The hunting party may have been on the planet for weeks, working to drive their prey towards the trap.

One other thing of note. We found out last week that there is going to be an official companion podcast which will feature an interview segment with show runner David S. Goyer every episode, and potential additional guests as the show progresses. In this first installment, there was a lot of interesting supplemental information: