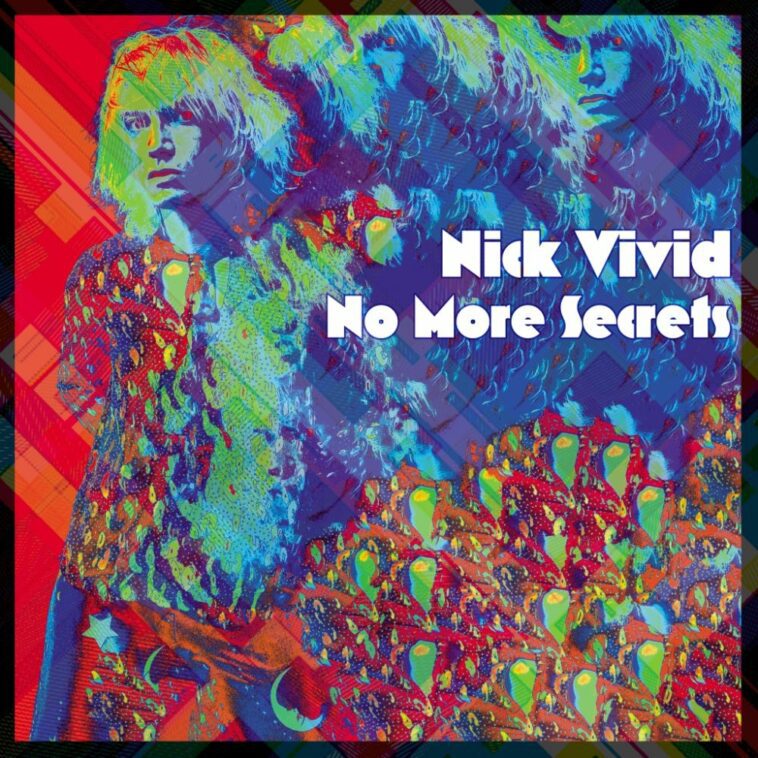 Nick Vivid walks to his own beat. Exhibit A: new album No More Secrets.

What is it? Loads of things. Dance. New Wave Funk. New Soul. Singer songwriter styles. And it really works. If takes self belief to shrug at the prevailing musical trends and do your own thing. Not sure Nick Vivid even saw them. As he says, ‘For years, I was miserable chasing the dreams and ideals of others.’

The pandemic helped him musically. Sounds odd, but so many artists I’ve spoken to recently have said the same thing, appalling to live through, even worse that so many didn’t, but by being locked down, there was focus on the music they could make.

For Nick, as he told Melodic Magazine, ‘What I learned and how I was able to grow was put into the album. I think maybe somewhere around September 2020 I was firing on all cylinders, creatively and spiritually.’

This is Nick Vivid’s 4th album. And it’s a huge step up—this is him deciding who he wants to be.

He’s from NYC and I feel sure he’s going to be on the top of everyone’s tongues soon.

That odd just off the beat old video game and Soul falsetto make ‘Trainers’ so memorable, once it gets in, it won’t leave you alone.

It has such a now and then feel to it, such a skittish groove, it’s undeniable and unavoidable. And it’s about video game pirates who provided us with cheat modes. No wonder it’s up first.

And check out the two videos for it. Yes, two: one is a nostalgic computer game graphic where we were delighted with a figure entering and leaving buildings and only that; the other is Nick singing the track. Actually, really selling it. It adds such charisma to music which some could mark as sterile.

‘Trainers’ is followed by a sucking beat and woozy synths that make the vocals sound desolate, ‘We Can Ride’ alright.

But with an ’80s melody and phased in an out solo, the busy backing of New Wave, almost Tom Tom Club guitars allow ‘The Sky Is Falling’ to overlay friendly vocals on top, with a hopeful sounding chorus about the sky falling—as you do.

And just listen to that almost Parliament feel of airy backing vocals and a high funking guitar in the middle of ‘I Wanna Reign Again’, whilst a rolling groove of a skewed electric piano and looped beats is at the heart of ‘Hush Money (Straight To The Bribe)’, beautifully odd.

Go straight to the Atari descending synths fighting against a slightly battering drum machine and that ever present Soul falsetto of ‘Ain’t Enough’.

All this us wonderful, he wants to have ‘as much ear candy as possible’; this album is a sweet treat.

In fact the beat is so important here and it’s no surprise that he had a drum teacher who was into Jazz Fusion, as he told Sosallyplays; ‘I was learning guitar, bass, drums, keys, recording techniques, album production, mixing, art design, manufacturing and distribution—all at the same time. Being experimental and just learning was my thing for a few years.’

All this shouldn’t work, but it fits together because Nick wants it to.

What influences are here? Well, a bit of Talking Heads jittery Funk, ’80s airy Pop, Curtis Mayfield maybe, but that does us no good. This is entirely Nick Vivid.

What else is it? Funky. Cool. Made to make you move. And he knows how to take you down aswell, ‘Blank Slate’ just drives off into the night on an ’80s US Funkband feel, a real end credits moment.

He told Melodic Mag about his musical upbringing, stating, ‘My mom and I really had the same fondness for “weird” music—glam rock, artsy stuff. Anything that was a little otherworldly and different’ and that gives a lifting off place for this music to really go places’.

This is an extraordinary collection. Nick Vivid’s advice to aspiring musicians in Soundigest: ‘Do what makes you happy today. If tomorrow you change your mind and decide something else will make you happy, start doing that instead.’

Well, this album makes me very happy today and I’m sure it will make me happy tomorrow too.

Nick Vivid should be heard—the secret is out