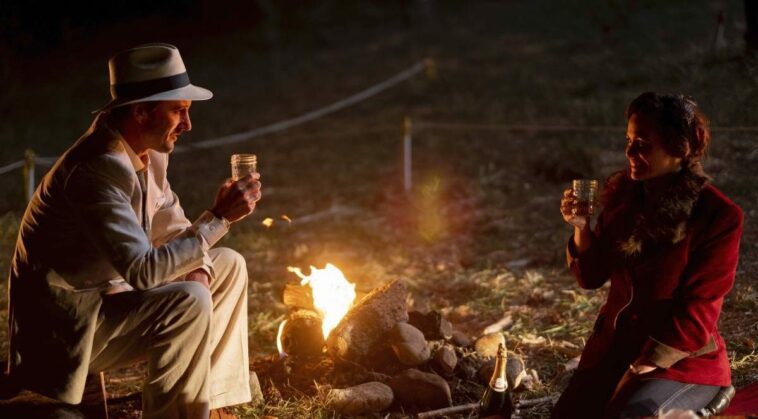 Room 104 is like a spider’s web of who’s who in the Duplass Brothers world. If you look carefully enough you’ll find all kinds of connections going back years, but this just seems to be how things are done in the world of Room 104, and Mark Duplass has intimated as much in interviews. They’ll come up with an idea, and if they know someone who’d be a good fit to write, direct or play a character they’ll try to pull them in.

Room 104 S3E1, “The Plot” is written and directed by Macon Blair, who to my knowledge has never worked with either Duplass, but along with childhood friend Jeremy Saulnier has moved on a similar indie film-making trajectory, and like the Duplasses seems equally happy writing, directing or acting. There are similar interests in the darker side of life too, with films like Murder Party, Blue Ruin, and Green Room. His directorial debut I Don’t Feel At Home in This World Anymore was a much more gentle affair, more in common with the bulk of the Duplasses film output; but still maintains a genre-bending approach like Room 104. It also featured Melanie Lynskey, who starred alongside Mark Duplass in the Duplasses’ show Togetherness.

Genre-bending is on display in “The Plot” also, which starts off feeling very much like a southern period movie made in the early ’90s, but veers in a different direction towards the latter half. Luke Wilson plays Remus, the estranged brother to Christine Woods’ Roma. Going back to those connections, Wilson has previously featured in Skeleton Twins, another Duplass Production (and one of my favourites), and Woods was in Paddleton, their first feature in the four-picture deal they signed with Netflix last year.

It’s not clear what the time period of “The Plot” is, but I’d hazard a guess at the ‘30s or ‘40s. Somebody with a better knowledge of cars could probably date Remus’ car when he pulls up to the plot in a clearing in woods, where Roma waits, smoking a little nervously. In typical Room 104 fashion, the exposition is delivered quickly, concisely, but as a natural part of dialogue and scene. It’s never hand-fed to you clumsily, and this episode displays that deftness of touch really well. It’s a skill that is rarely noticed unless someone is failing at it really badly, and here Blair seems to slip into the Room 104 style of accomplished brevity like he’s always been here. We learn that their father died recently, but Remus didn’t make it to the funeral, having been in Budapest. It’s made clear that Roma is the steady one, staying behind while Remus wanders around, travelling, footloose and fancy-free. Describing his car, he says, “Solid as a rock, just like you”.

It’s a testament to the storytelling that it took me a few minutes of watching this odd reunion in the woods before I realised that they weren’t actually in Room 104. They weren’t even in the motel. What is going on? These aren’t the rules. The show is called Room 104! Every episode is supposed to be in Room 104. It wasn’t long though before things became clear when they start discussing Roma’s plans for the hotel she wants to build on the plot, and needing Remus’ signature on the contract. It clicks—we have ourselves an origin story ladies and gentlemen! OK, granted, it is still breaking the rules. They’re on the site of the future motel that will contain Room 104, but they’re not actually in the room, or even on the exact site of the room. Whatever, rules are there to be broken if there’s a good enough reason, and this seems to be the case in point.

As Remus signs the purchase contract, pondering the end of his wandering days and settling down. Roma starts to chastise him for leaving her to look after their father alone, who clearly became ill and declined badly, as Roma was left to “wipe his bottom” and hold him “while he wept like a baby and called out to his own mother”, and he described the pain “like having a rat king living in his bowel”. This tense moment is made instantly funny instead by Remus pretending he knows what a rat king is, mentioning a little crown, but he does seem genuinely contrite, and apologises. While Roma has obviously slowly built up resentment and anger whilst caring for her dying father, Remus has possibly grown up a little, and as we learn, has given up drinking because he didn’t like the person it made him become. This announcement throws Roma a little, as she prepares to pour the champagne she has brought, hinting to us as viewers—if we didn’t suspect it already—that she may have nefarious intentions for the meeting, and in the champagne. Her eyes lock onto the pistol Remus carries, making us sure this is, in fact, her intention.

It’s always at this point in a Room 104 story where you begin to wonder if things will play out as they seem to be signposting, or if there’ll be a twist. Sometimes, things go as expected, and you’re kind of disappointed, as I was with “FOMO” in Season 2. Here things go as expected, but it’s really just the setup for the second act. Having shot her brother, Roma she sobs, laughs, and screams into the night.

The years of witnessing her father’s decline and resentment have obviously done a lot of damage to Roma’s mental state. It’s into this scenario that the hobo lumbers in. Something seems off with him straight away, flickering from menacing to clownish in seconds, but we’re not quite sure whether it’s just years of loneliness on the road that have made him this way, or if there is something wrong with him that has led to him ending up on the road. Or, it being Room 104, whether we should interpret that manic gleam as something more macabre.

My instincts proved correct and crazy hobo guy, in fact, turns out to be some kind of evil body-swapping, scary mouse-headed, demon thing, first taking on the form of Remus, then Roma, after dispatching her with a breath. His yell of “Now you’re mine too”, and his capering reminds me a lot of Papa Lazarou in League of Gentlemen, and given Room 104’s central conceit being very close to that of Inside No. 9, from two of the creators of League, I have to wonder if the Room 104 team don’t spend their nights binge-watching dark British comedy shows.

As the demon hobo takes the purchase contract from the body of Roma and tries to practice a welcome speech to guests, we’re left wondering if the plot of Room 104 is now cursed, or simply imbued with the dark magics of the demon hobo. We never see the proprietor of the motel, but one can imagine the hobo, in the form of Roma, sitting behind a desk, quietly drawing people to the motel solely to meddle in their lives. Or, are the troubled souls who end up in Room 104 simply drawn there because it has a darkness about it that calls to them? We probably won’t get to know, but what we do now know is that Room 104 isn’t the problem, but the entire motel.

Episode 1 was a great start to Season 3, and adds a little more mythology to the show, although I wouldn’t expect this to continue beyond this peek into the origins of the motel. If you’ve missed earlier seasons take a look at the pre-season 3 article highlighting some favourites of mine.