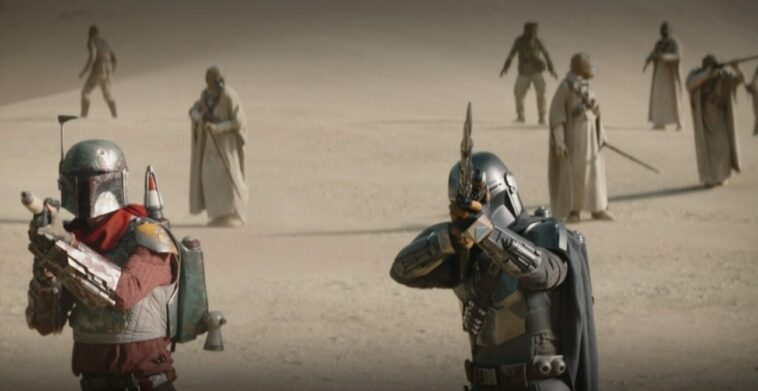 Greetings from a galaxy far, far away! After a 10-month wait, The Mandalorian S2E1 “Chapter 9: The Marshal” finally dropped. That, of course, means it is time to explore the further adventures of Din Djarin (The Mandalorian) and The Child. I am glad you are joining me on this journey through Season 2, and will do my best to provide you with some valuable insights.

A Little Help from His Friends

As The Mandalorian S2E1 begins, the direction of the season seems to quickly come into focus. Before the opening credits, we see Mando searching for any other Mandalorian he can find. He hopes that the Mandalorians can be the network that supplies him with the information he needs. His meeting with Gor Koresh, the one-eyed alien, provides us with insight to a couple of questions I posed in my previous article. First, there are indeed other Mandalorians out there. Gor Koresh has been killing them to collect their Beskar armor, as its value has been skyrocketing. This may also explain why the Mandalorians have been in hiding—people are targeting them for this valuable metal.

Mando once again leaves his ship in the care of Peli Motto. We saw her last season in “Chapter 5: The Gunslinger.” This scene shows the impact that IG-11 had on Mando. In Season 1, he made a big deal about not trusting droids. Now, though, for the first time since the Super Battle Droids wiped out his village, Mando lets droids do the jobs they were created to do.

The whole reason Mando travels to Tatooine is to find the rumored Mandalorian that Gor Koresh told him about. Mando journeys to Mos Pelgo, where this Mandalorian is said to live. This person, though, turns out not to be a true Mandalorian. Cobb Vanth, the Marshal of the town, purchased the armor from Jawas. The armor, though, clearly is the armor of Boba Fett, as highlighted by the dent in the helmet. Somehow, the Jawas came into possession of pieces of Boba Fett’s armor after he was swallowed by the Sarlaac in Return of the Jedi.

Was Cobb Vanth the person we saw at the end of “Chapter 5: The Gunslinger”? I don’t believe so. If you read my previous article, you know I believe that person was clearly Boba Fett or someone wearing Boba Fett’s armor. There are differences, though, between what we see of Cobb Vanth and what we saw of that mysterious person. First of all, the person at the end of that episode made spur sounds when he walked, just as Boba Fett did in The Empire Strikes Back. Also, the scanning or computer beeping sounds that we hear at the end of that episode are identical to the ones we hear in the A New Hope special edition. Unless I missed it, we don’t hear either of these sounds in this episode. Additionally, Cobb Vanth is never shown wearing a cape, past or present, unlike the character at the end of “The Gunslinger.” This leads me to believe that there must be another set of armor out there.

For a long time, Star Wars canon has been a contentious subject. Under George Lucas, there were two levels of canon: Movie and TV canon and a secondary canon that added books, comics and other supplementary stories. Some latched onto the former; others, the latter. When Disney purchased Lucasfilm, they categorized the secondary canon sources as “Legends.” Going forward, the company said that all stories would be canon, in conjunction with the original Movie and TV canon. “Everything is canon” became a tagline for how Disney planned to proceed.

The introduction of Cobb Vanth in The Mandalorian S2E1 may have implications on Star Wars canon. Cobb Vanth was originally introduced in Chuck Wendig’s Aftermath book series. In the series, he was the Sheriff of Freetown, not the Marshal of Mos Pelgo. Additionally, the explanation of how he acquired Boba Fett’s armor differs from the show. In the book, Cobb and a character named Adwin Charu visit Jawas to buy droids, but compete over the armor after Charu discovers it in a box. In the show, Vanth gets the armor from the Jawas after they find him close to death in the desert, but the character of Charu is not present. Disney may find a way to explain away the differences, but the differences support something I have long believed: everything is canon…until it isn’t.

Throughout the series, Mando has shown a habit of collecting unexpected allies. The Mandalorian S2E1 is no different. While Mando and Vanth first seemed destined to come to blows, they quickly became allies while trying to kill the krayt dragon. I feel certain we will see Vanth return later in the season to help Mando, much like Kuill and Cara Dune did in Season 1.

While the Tusken Raiders have traditionally been portrayed as savage creatures bent on destruction of the beings that have settled on Tatooine, The Mandalorian has shown them to be honorable beings. Just as Mando was able to bargain with them in “Chapter 5: The Gunslinger,” he is able to find common ground between the Tusken and the miners in “Chapter 9: The Marshal.” The Tusken decide to help the miners take down the krayt dragon, in return for rights to the creature’s carcass. Additionally, they agree to no longer attack the miners, unless the miners attack them first. As with Vanth, I can’t help but wonder if this tribe of Tusken is destined to swoop in and save the day later this season.

One of the most exciting moments for me personally was the final scene of the episode. From behind, we see a man dressed and armed like a Tusken Raider, but without the mask. He is standing on the edge of a cliff, watching Mando and The Child ride off into the sunset. This man turns around and walks toward the camera, showing the return of Temuera Morrison’s Boba Fett. Definitively, Boba lives!

This revelation brings up additional questions. How did he survive the Sarlaac? Are we sure he isn’t just another clone of Jango Fett? How did he get the scar across his face? Why is he watching the scene below? Has he adopted the life of a Tusken Raider or is he in hiding?

The show may have given us a hint of how he escaped. At one point, Mando says that abandoned Sarlaac pits happen “if you eat the Sarlaac.” As for whether or not he could be a different clone, I believe that is highly unlikely. In Attack of the Clones, the Kaminoans explain that the clones, with only the exception of Boba Fett, age at twice the normal rate. Given that The Mandalorian takes place 31 years after Attack of the Clones, per the official Star Wars timeline, those clones should be in their late sixties or their seventies by the time of this episode.

In Season 1, we discover that Mandalorian is not a race—it is a creed. Here is what we know about that creed from the first season:

What did we learn in The Mandalorian S2E1?

Thoughts and Theories about The Mandalorian S2E1 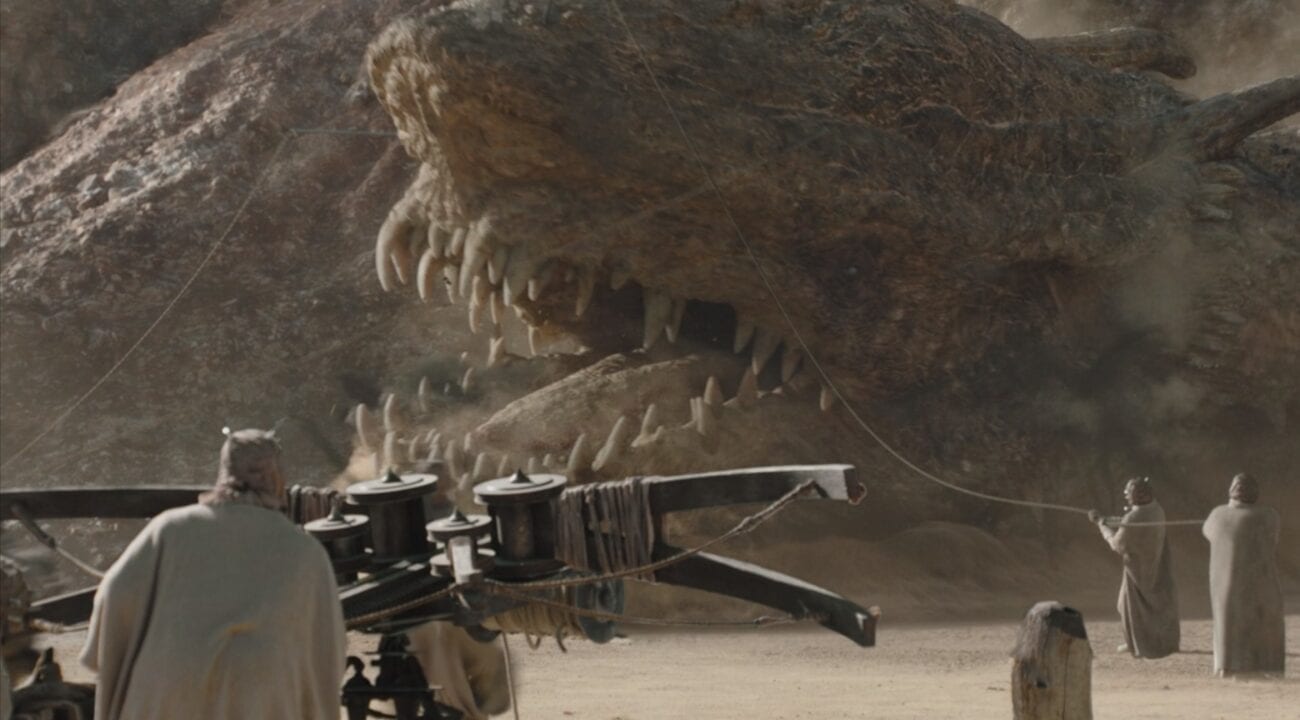 Easter Eggs and References in The Mandalorian S2E1

Here are some of the Easter eggs and references that stuck out to me in The Mandalorian S2E1.

Memorable Lines from The Mandalorian S2E1

The Mandalorian S2E1 “Chapter 9: The Marshal” was another great episode. Much like “Chapter 2: The Child,” this is one of my favorites. Jon Favreau and team brought so much to this episode. I love the fact that we got to spend some time with the Tusken Raiders and see them as more than just monsters to be feared. We get to see the continued growth of Mando as an honorable man who truly cares about others. The other thing I love, of course, is the return of Boba Fett. I hope you enjoyed the episode as much as I did. If you have comments, theories or other easter eggs I didn’t mention, please leave a comment below. I’d love to hear your thoughts.

This is the Way.

Todd Giammo is a long-time Star Wars fan who happens to also love watching or talking just about anything science fiction, fantasy or animation. Some of his other favorites are Lord of the Rings, DC Comics, Babylon 5, Futurama, The Cosmere and Looney Toons. Sometimes, he cringes when he thinks about how much he has spent on Star Wars toys over the years. Outside of movies and TV, he likes disc golf, board games, performing improv and the forest.