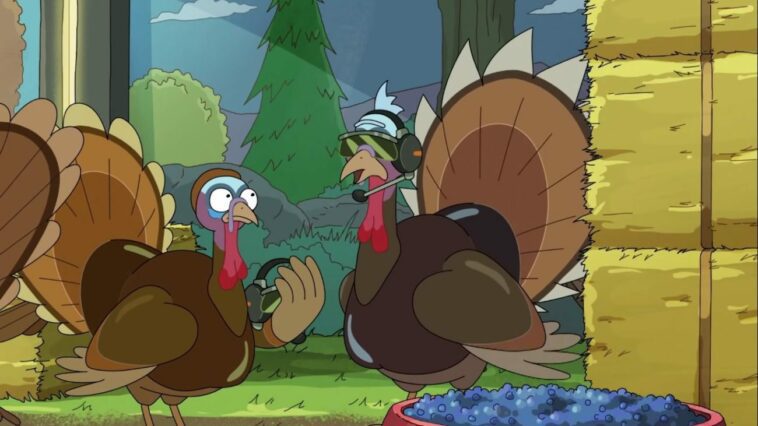 So far in Season 5 Rick and Morty has anthropomorphised wooden toys, mailboxes, sperm, and now it’s turkey time. As befits a Thanksgiving special (that airs in the middle of summer) S5E6 is full to the brim of American culture and in-jokes. In fact it seems to want to make every single point about Thanksgiving, patriotism, and US politicians that it is possible to make. Visually cool, but hardly intellectually challenging, S5E6 showcases the good, the bad, and the mediocre aspects of Rick and Morty. 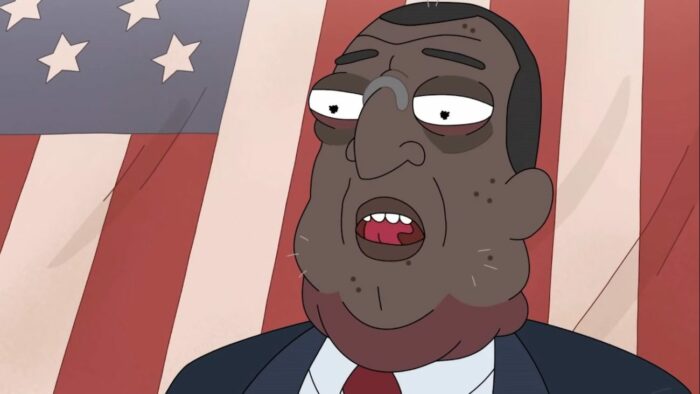 The cold open sets the episode up like it’s going to be a National Treasure homage, as we find Rick and Morty attempting to steal the US constitution. Rick makes some amusing anti-patriotic jokes, and this attitude is quickly materialised when Morty blasts a hole through several iconic landmarks. The National Treasure references return later in a satisfying heist explanation montage, but the episode jumps in all different directions and ends up parodying half a dozen more franchises and concepts. The cold open also features a bit of misdirection with the reveal that there is a giant robot assassin stored inside the Statue of Liberty (“never trust the French”) but it never becomes a key part of the episode.

The destruction of the landmarks serves as a catalyst to Rick’s objective for this episode—to get a Presidential pardon—which he endeavours to achieve by disguising himself as a turkey. This, apparently, Rick has done many times in the past when he has needed a pardon for one crime or another, which is ironic, because in some ways it does feel like the show has been here before. It has elements recognisable from ‘Pickle Rick’, the snakes in ‘Rattlestar Ricklactica’, and the time the President shrank his body down in ‘The Rickchurian Mortydate’.

President Curtis squares up with his turkey-hybrid counterpart (who has already learned how to bribe Congress), whose rather uninspired masterplan is to create a whole army of American turkey super soldiers. While there are some amusing turkey related gags—such as trying to spit with no saliva glands, or being able to see in 270 degrees—it’s hardly revolutionary. Rick and Morty may have finally done mutants and hybrids to death. 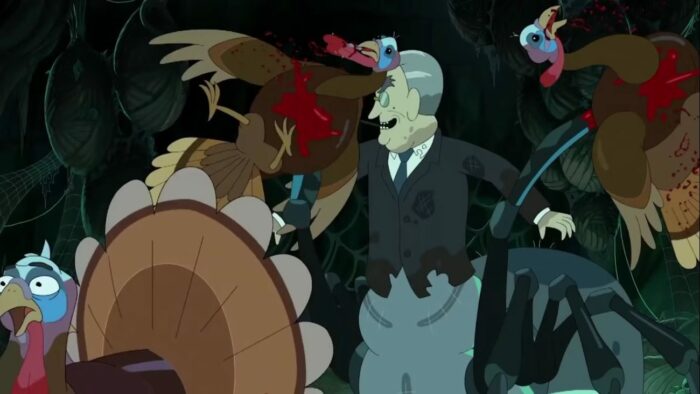 At this point what’s a terrorist? It’s a guy you don’t like, big deal

The fake country song that plays over the rather horrifying turkey-transformation animation is as funny as fans have come to expect from Rick and Morty parody songs. More importantly it underscores the episode’s attempts to skewer American identity. On the one hand there are the archetypal army characters and their archetypally Midwestern lives, on the other there is Rick’s anti-American (anti-country, actually) anarchism. This episode rather offhandedly rewrites the history of America by bringing in the (morally dubious) ancient aliens conspiracy theory. It actually ties in well to a Thanksgiving episode—as the white settlers were not the first people in America, so was the human race not the first to live on Earth. This is spelled out nicely for the audience through Morty’s realisation that modern America isn’t original or special.

In a season that feels oddly like it has given science fiction the least consideration of all genres, S5E6 at least has glimpses at some exciting sci-fi elements—for example, the FDR Spider is legitimately creepy. Furthermore, the use of the corn field is clever, since it commonly represents both sci-fi-lore and Americana—this culminates when the turkey-hybrid president is stabbed through the heart with a corn stalk. The speech that parodies all presidential speeches in any number of movies (though the one that springs to mind is Independence Day) sounds familiarly meta to Dan Harmon fans. “Speeches are words, lists of words” etc. is very Jeff Winger/Abed Nadir-esque (Community). However most of the genuinely exciting stuff is pushed to one side to accommodate the surprisingly bland man vs turkey story line. The brief AT-AT (Star Wars) appearance seems a bit random, and doesn’t save what is a fairly generic battle sequence. This is another disappointing example of brawn-over-brains, where the concept dictates big explosions, but little thought.

I associated Thanksgiving with genocide, it’s what young people do 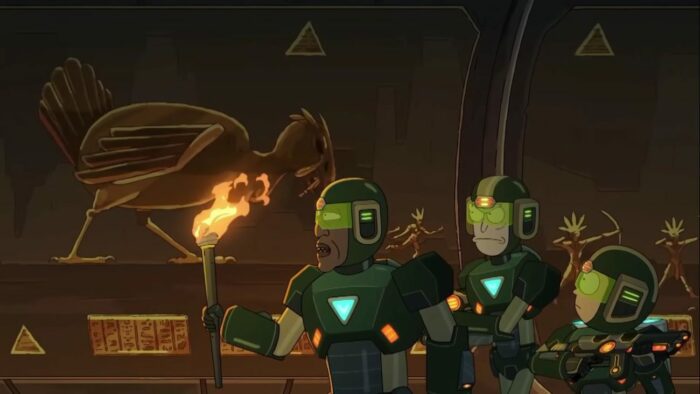 A significant but fleeting moment in this episode was when Rick used decoys (though they were never referred to as such) of himself and Morty to buy them time, like in ‘Mortyplicity’. It almost felt like continuity for a moment. One of the reasons that ‘Mortyplicity’ worked so well was that it went all-out to find the most bleak repercussions of its concept—’Thanksploitation Spectacular’ is similarly (though briefly) successful in doing this in the post-credit scene. This features one of the marines (voiced by guest star Timothy Olyphant) in an appropriately bizarre scene about the economic and psychological consequences of military service. Despite his devout service to President Curtis, he has no financial support, and appears to be suffering from turkey-related PTSD. Yes, Rick and Morty is a comedy, but an adult comedy, and shouldn’t have to fall back on quippy dialogue to keep people engaged.

So as always, when it’s good, it’s really good. But for the most part, S5E6 was middle-of-the-road. Much of it had promise, but the overall execution was too fixated on achieving an explosive action set piece. The aliens were cool, the FDR spider was cool… Somehow, in a Thanksgiving episode, the turkeys were the most forgettable part.