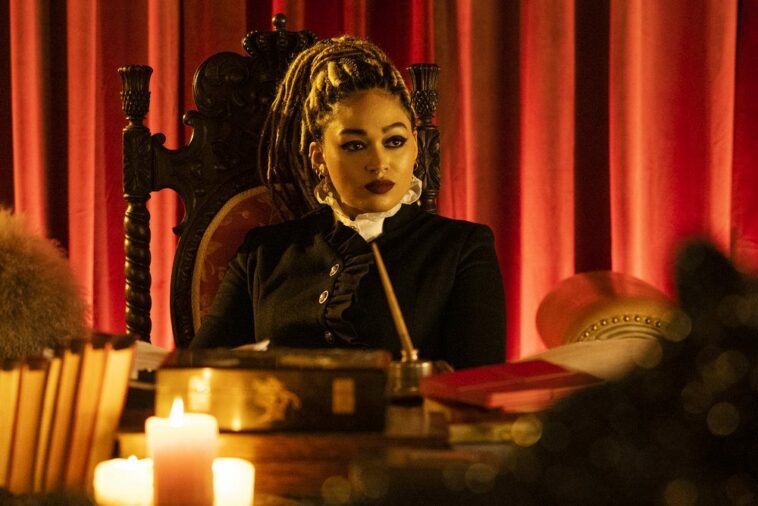 REGINALD THE VAMPIRE -- "No One Dies for Failing the SATs" Episode 109 -- Pictured: Savannah Basley as Angela -- (Photo by: James Dittiger/SYFY)

The following contains spoilers for Reginald the Vampire S1E9, “No One Dies for Failing the SATs” (written by Alejandro Alcoba, based on the books by Johnny B. Truant and directed by Jeremiah Chechik)

If you sit back and relax as a passive viewer, this is a decent television episode. However, under a microscope, Reginald the Vampire S1E9, “No One Dies for Failing the SATs,” is over complicated and wears too many hats.

It acts as a “what happened while Reginald was away” episode, a reuniting episode, a reconciliation episode, a find a solution to the puzzle episode, and a greet the new villain episode. That’s too many hats. There are so many loose ends tied in this episode; it barely has its own story.

It’s nice to watch characters I like come together and forgive one another, but it’s another thing for the entire episode to be about that. Reginald the Vampire S1E9 almost felt like fan fiction because so much of the episode was about pairings overcoming grudges. I wouldn’t say that the tone felt out of place within the season, but I do think it was all a bit heavy-handed.

There was also a lot of fill-in-the-blank. Like, we’re suddenly clued into a deal Maurice (Mandela Van Peebles) and Angela (Savannah Basley) made that’s cost her, Mike (Ryan Jinn) has been plotting revenge against Angela, Sarah (Em Haine) was the manager at Slush Shake in place of Todd (Aren Buchholz) who somehow survived, Ashley (Marguerite Hanna) has supposedly still been filling her time sleuthing. Almost every character gets a line about what they’ve been busy doing while Reginald was out of town in the overbudget bottle.

I understand where the writers’ room would be coming with this, but it was, again, extremely heavy-handed.

Reginald (Jacob Batalon) throws secrecy out the window, and for some bizarre reason, Maurice is okay with that? After eight episodes of Maurice being up Reginald’s ass about blending in and keeping quiet, suddenly it’s cool for this random plethora of people to know that vampires exist. That flip is bonkers. Thinking about it makes me laugh.

Now that Todd knows Reginald is a vampire and everything, he asks to become one. Reginald leans in; he thinks turning Todd will somehow help during the assessment, but when Todd had previously gone to Maurice… I think there may have been a sexual proposition attached, which is WILD! I did not foresee Todd being down to clown gay style but damn okay. Reginald the Vampire has definitely been screaming “Gay Rights” the entire season, so okay, slay.

I think for a while there, I was taking this show too seriously and looking for clarity in plot structure and character continuity that I don’t know was the priority in this writers’ room. So, if I put my feet up and watch this Reginald the Vampire with the same lightheartedness I might approach a Hallmark film with, then Reginald the Vampire is actually a delight.

We have one more episode, the finale, and as of now, there is no word on whether or not Reginald the Vampire will be picked up for Season 2. As far as I can gather from a few viewership polls, Reginald the Vampire’s audience has significantly dropped since the initial pilot episode aired. I don’t think it’s looking great for lovers of this SYFY series.