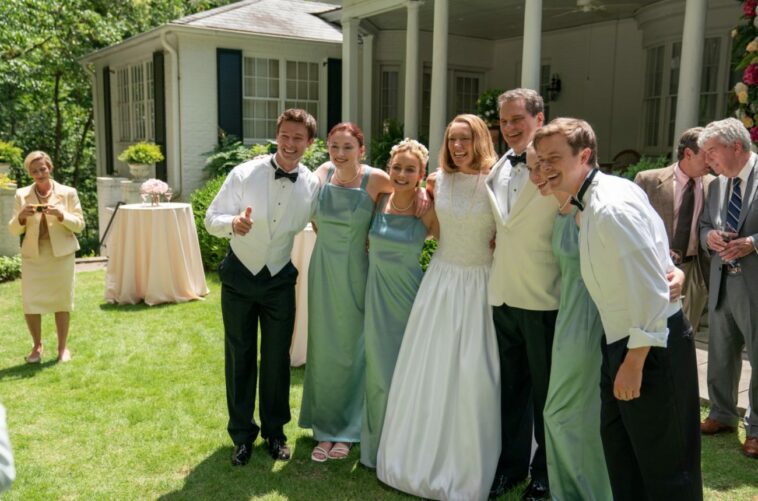 “Justice is a construct, little more than a game. A game that shapes the outcome of a man’s life,” Sophie Brunet (Juliette Binoche) says at the beginning of the episode. Perhaps more so than the original docuseries, this version of The Staircase (2022) takes a look at how the American justice system is more interested in selling a story than in achieving justice. It’s a concept that comes into focus in crimes where there is no confession and the main suspect is adamant about their innocence.

Sophie acts as a narrator of sorts throughout this episode. She is a French editor who worked with documentarian Jean-Xavier de Lestrade (Vincent Vermignon) on The Staircase (2004) docuseries about Michael Peterson (Hugh Grant). What began as a series of emails turned into a romantic relationship that lasted from 2003 to 2017. It’s the first new, interesting piece of information for viewers who watched the original docuseries. Sophie appeared very briefly in one of the 2012 follow-up episodes of The Staircase (2004) docuseries. She was seen in the courtroom and later celebrating Michael’s prison release, but her presence was not really acknowledged. Certainly not to the extent of explaining who Sophie and Michael were to one another. For those new to the Peterson trial, this episode is their first meeting of Sophie.

The first three episodes were a bit of a slog to those familiar with the case, but the introduction of Sophie is proving to be an interesting development. Her ruminations on justice, storytelling, and the trial are fascinating, as she’s uniquely poised to understand the complexities involved. The real Sophie Brunet isn’t merely a documentary editor. She most famously edited the Palme d’Or-winning Blue is the Warmest Color, as well as a handful of other documentaries. Not only did she have a romantic relationship with Michael, but she watched the thousands of hours of footage Jean-Xavier filmed for the docuseries about Michael. Introducing Sophie as a quasi-narrator breathes some life into the formulaic nature of this scripted true-crime adaptation.

Another beneficial change in this episode is its shifting focus. It’s not a courtroom drama that’s simply a rehash of the docuseries and some expositional overload. Instead, The Staircase (2022) leans into the freedom it’s given as a fictitious retelling of events. The audience finally sees the Peterson children react to the media circus around their father. The talented younger cast (Odessa Young, Dane Dehaan, Sophie Turner, Olivia DeJonge, and Patrick Schwarzenegger), who spent most of Episodes 1–3 lurking in the background, are now a rejuvenating presence in the series. The tension created when Martha is forced to attend court on the day Kathleen’s (Toni Colette) graphic autopsy photos are shown and Clayton’s discovery of the blowpoke (believed to be the murder weapon) reveal deeper secrets in the siblings’ relationships. The Peterson family is not as perfect as they would like the audience to believe.

The success of The Staircase (2022) hinges on its ability to distance itself from the docuseries. As a fictitious retelling of true events, it has the ability to reveal what really happened between Michael and Kathleen Peterson. The writers don’t need to deviate far from the known facts of the case to create a compelling story, but they have the unique ability to visualize a multitude of outcomes. So far, the series has presented two different reenactments of Kathleen’s death: one as an accident and one as a murder. It’s a further examination of how much of the justice system relies on a lawyer’s ability to weave a story. After a lackluster three-episode premiere, The Staircase (2022) is beginning to make a case for its existence.