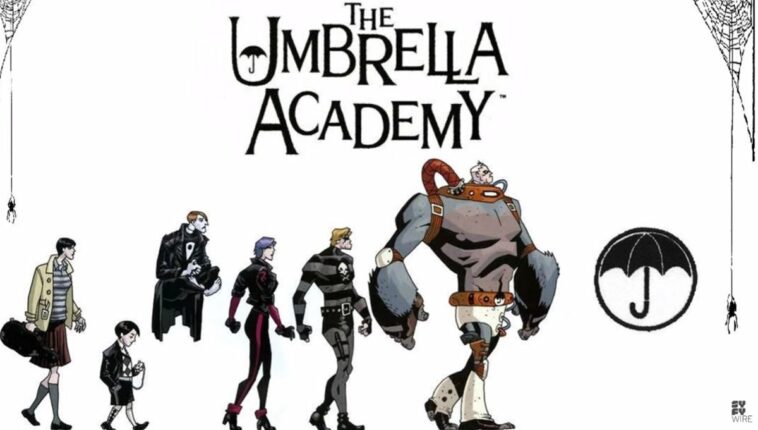 When I saw the teaser trailer for the upcoming Netflix adaptation of Gerard Way’s comic series The Umbrella Academy, I was left feeling a tiny bit ecstatic. I’ve bought the comics as they came out over the years and lapped up the artwork and intricate story. So to see the characters I love so much living and breathing was amazing. I had a few doubts with some of what was shown but overall I was excited. And now the official trailer has been released, and it’s hyped the show up even more.

In this longer trailer, we get a better look at all of the characters and a better overall feel for how the show is going to look. Particular standouts at this point for me are Ellen Page as The White Violin, Emmy Raver-Lampman as The Rumour and…is that…Mary J Blige as Cha Cha?! Yes please! The trailer has the same fun, sarcastic feel as the comics had and it’s given me higher expectations for what this could be.

The trailer shows us that the story arc from The Apocalypse suite will be featured in the show, as we see No.5, or “The Boy” stating he has seen the apocalypse whilst visiting the future. It makes sense to cover the first series of comics and I’m looking forward to seeing some of the stories unfold in live action. Particularly the Orchestra Verdament! I still have a few questions as any fan of the comics would. Where is Space Boy’s gorilla body? Will we see the Eiffel Tower mission from issue 1? Will Gerard Way make a cameo appearance?

Many questions will hopefully be answered and I for one cannot wait to watch this series. The cast seems well fitted to the characters, both Gerard Way and Gabriel Bá have worked on the show which gives me faith it will be true to the comics, and Apocalypse Suite was my favourite series overall. I don’t know about you, but I heard a rumour that this is going to be awesome.

The Umbrella Academy drops on February 15th on Netflix and I will be bringing you my thoughts soon after! Stay tuned!

Anthony Divers is a writer and social media manager for 25YL, and works as a team leader for a group of staff in a service centre. He loves gaming, horror movies and music. Living in the North East of England, he is surrounded by family, cats and his partner, who also works for 25YL. He believes he is the funniest man in England, and collects the souls of his defeated enemies in cute little jars. He has won first prize for the annual Valentine's poetry competition at his work place 3 years in a row, and also took the trophy for Best Wig in 2014*

*no one else was judged, or indeed asked to wear a wig, but a trophy's a trophy.