The following contains spoilers for Evil S2E3, “F Is for Fire”

At the end of last season of Evil, David (Mike Colter) Kristen (Katja Herbers) and Ben (Aasif Mandvi) discovered that the strange shapes they’ve been investigating comprise the logo of RSM Fertility Clinic, an In-Vitro-Fertilization site that the the trio suspect is complicit in a scheme to corrupt eggs and produce cursed offspring. It is this claim that David uses to convince Sister Andrea to help him decipher what Leland has written on the sigil map. Sister Andrea (Andrea Martin) deduces that Leland’s enigma is to change the alphabet with each letter he writes–Assamese, Cyrillic, Burmese–and discovers a name: Mathilda Mowbray. What is so interesting about Mathilda that Leland wrote her name on the demonic sigil map, and why is he so secretive as to encode it, particularly on a document he thought he had carefully concealed?

Mathilda is this week’s case because she has been starting fires around the house, despite every effort made by her foster parents to remove any and all flammable or kindling materials. Even a nanny cam finds Mathilda talking fearfully towards her closet, before something in the closet ignites.

One thing I really liked about the initial exchange between Kristen and Mathilda is how Mathilda is clearly very conditioned to the experience of talking with psychologists. Kristen opens with talking about what makes her happy and asking Mathilda what makes her happy, to which Mathilda counters with saying that Kristen doesn’t need to start with her own example just to ask the question. It’s a common tactic employed by psychologists to make a connection to the patient, and it’s a neat little detail that Mathilda’s multiple conversations with different psychologists has keyed her into the method.

I’ll probably end up mentioning the performances in every one of these articles, and not for no good reason: this week’s guest is child actor Matilda Lawler, knocking it out of the park as Mathilda. Her performance is eerie, teetering between broken child and actual evil, and when she does tip into the latter, it’s genuinely startling. 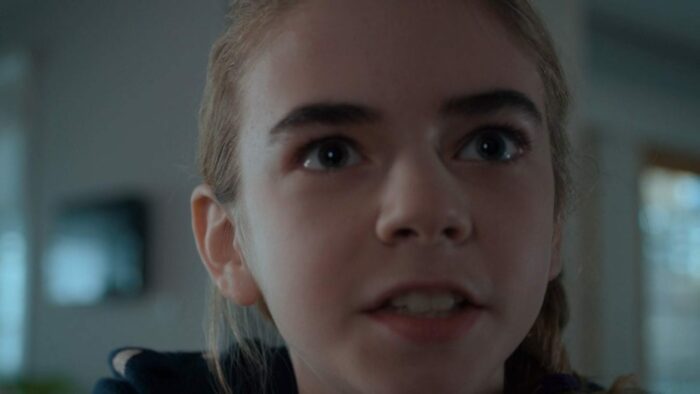 Speaking of Lawler—and this is my personal million-dollar question of the week—this isn’t her first appearance on Evil: she’s credited in last season’s Halloween episode as the supremely creepy princess-mask-wearing “Brenda”—the girl with a bottomless well of terrifying stories, including one about a girl forced to wear a mask because—wait for it—her face had been horribly burned. The camera is careful to not ever show “Brenda’s” face in that episode, and it ends with the strange girl dropping her mask and skipping off into the night. I put the name in quotations because the Brenda originally planned to spend Halloween with the Bouchard daughters was sick in bed, so this kid was someone else.

Anyway, “F Is for Fire” pretty much goes whole hog (whole goat?) on the demonic side of things. It’s definitely less ambiguity and more just putting the viewer on the defensive—there has to be a rational explanation for these things, right? Unfortunately, Mathilda’s eyes glinting red before she takes on a deeper voice in Arabic ain’t exactly in the DSM-5.

Indeed, Mathilda’s possession seems to be the real deal, and her description of a man that visits her at night, with the top of his head looking like a pyre ablaze, matches the description of the subject of stories Ben’s mother used to tell him and his sister when they were young. This being is Ifrit, a jinn. A jinn is a shapeshifting supernatural being from Islam, though, despite what a Google image search would tell you, they aren’t necessarily evil, nor are they worshipped. They, like humans, are morally fallible, and, as Ben puts it, could mean different things for different people.

That’s why it’s interesting when Kristen, lonely and sexually frustrated, begins venturing out at night to visit bars and flirt with strange men. Each time she comes close to committing adultery, she suddenly see Ifrit: standing on the street, sitting the back seat of her car, or watching her from her yard. There’s not enough information on Ifrit yet, so the question remains whether Ifrit is connected to her because of her sinful desires, or manifests as a deterrent to her venturing down a darker path. When she first sees Ifrit, Kristen glances down at the bracelet she wears to remind herself she’s not in a dream—and the bracelet is present. Just before that, Kristen glances over to a man in an adjacent car at the stoplight, who appears to be choking, or twitching, or something. I still can’t figure out who or what that might be. 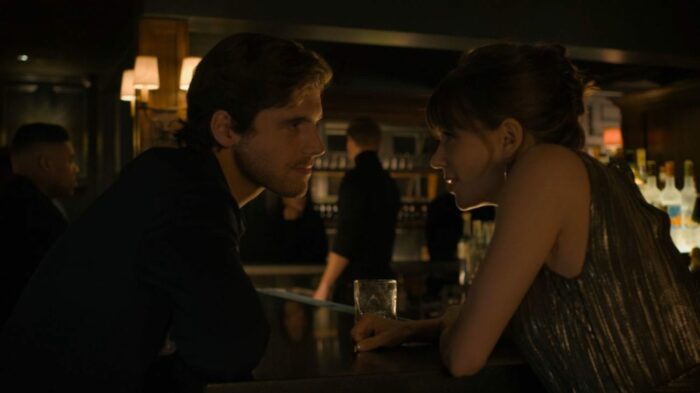 “F Is for Fire” highlights the intersectionality of faith, which ends up being this episode’s big theme. This month isn’t about science vs. faith; it’s about everyone’s individual faith, and how that affects them. Psychology and religion are tightly intertwined in general, so this was a really neat angle for the episode to take. Mathilda’s foster mother is Muslim, while her foster father is Catholic, and each of them have different opinions on how to proceed with Mathilda. When our heroes show up to Mathilda’s scheduled exorcism with a priest in tow, they find that Mathilda’s foster mother has taken it upon herself to bring a shiekh to perform his own exorcism. The two butt heads initially (the priest states that the jinn could just be a demon in disguise). David posits that there is nothing in either of their sacred texts prohibiting them from working together. This is another indicator of the show’s respect for subjective spirituality, which again works wonders in refusing to subscribe to any “easy” answer to the events in the episode.

Ben’s Islamic upbringing and David’s spirituality share a belief in supernatural beings. It’s also one of the first times we’re hearing of Ben directly acknowledging such beings, albeit in the form of a jinn. When Kristen playfully chides him for “starting to believe,” a very brief sort of anxiety sets in on Ben’s face, and he backtracks to state that he’s just “protective.” Earlier, he cited how his mother’s tales of Ifrit used to terrify him. There’s a suggestion here that something between his upbringing and his adulthood caused him to adopt a purely scientific worldview, and be so fiercely defensive when it comes to religious matters concerning him personally. His latest visitation from his night demon involves her trying to convince him that his two friends do not respect his beliefs, so it definitely seems like Ben’s faith is going to be something that is explored in subsequent episodes, possibly even driving a rift between him and Kristen and David.

One last thing that really had me thinking was Sheryl, Kristen’s mom. Sheryl starts seeing Dr. Kurt Boggs, who is also Kristen’s therapist, but is careful to withhold the details of her connection to Kristen, discussing her relationship with her daughter using a fake name for Kristen. Boggs eventually figures out the truth, and terminates their therapy sessions on account of Sheryl’s false pretenses. Sheryl dissolves into tears, falling to her knees and hugging Dr. Boggs around his waist, begging him to reconsider. To a lesser extreme, she cried earlier in the episode when trying to reconcile with Kristen. While the latter might have had some sense of genuine intentions, the interaction with Dr. Boggs is extremely suspicious. Sheryl is an intense, very strong woman and that meltdown is not congruent with her normal behavior.

“F Is for Fire” continues Evil’s insane hot streak of thought-provoking, creepy episodes, particularly through Season 2. The episode ends with Mathilda sitting on a lawn, and suddenly igniting the trash bin on the curb in front of her, which all but erases the possibility of some chemical reaction starting the fire. Things are getting pretty demonic up in here, which makes Sunday even more of something to look forward to.