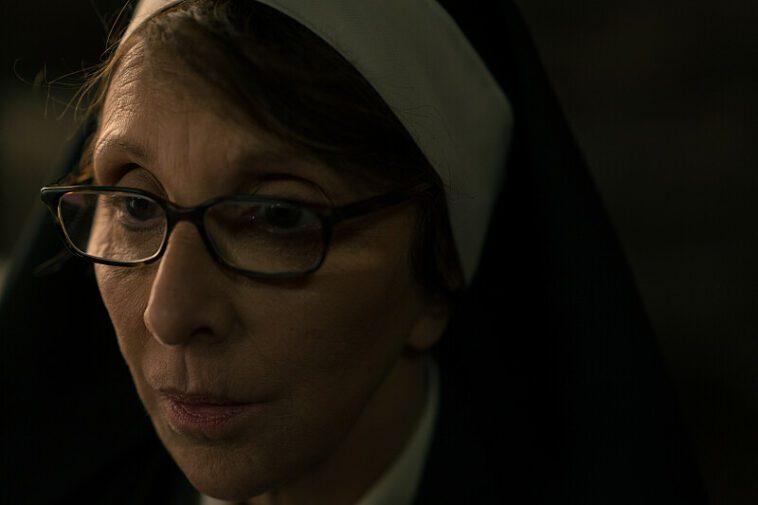 The following contains spoilers for Evil S3E5, “The Angel of Warning” (directed by Matt Kregor and written by Rockne S. O’Bannon & Erica Larson)

Evil S3E5 “The Angel of Warning” opens with the catastrophic collapse of a tower and frantic EMS teams setting up a crisis unit in a nearby community center. David is called to be a spiritual counsel. As David left his room in a hurry, he failed to bring a collar with him. Less than two minutes into the episode, multiple characters mistake David for a police officer and advise him to procure a collar, prompting him to craft a makeshift one from a white tear-off note. Recall that in the Catholic Church, David’s status as a Black priest is extremely rare, leading to these unconscious biases.

Each of four survivors of the collapse describe being guided out of the crumbling building by a woman wearing glowing white robes and carrying a lamb. The Monsignor indicates that this could be the angel of Sister Mary, a Sicilian nun, and that these visitations would be the second miracle required to grant her Sainthood. Ben and Kristen make multiple attempts to tie this to psychology, but every theory they have is soon shattered, which is unusual but welcome for Evil.

The only Black survivor of the collapse, who describes her angel as Black, seems to make the Monsignor uncomfortable as Sister Mary was White. This snowballs into tension between our heroes and the Monsignor, as well as sows doubt in David’s own beliefs. David is falling back into doubt in his visions, as the overwhelming majority of religious drawings depict religious figures as White, even those confirmed to be Black in real life—meaning that his visions of White angels and Black demons are just a psychological product of his concerns of racism in the Church.

This is the week where the Ecclesiastical Tribunal decides Sister Andrea’s fate, and according to the Monsignor, the Archdiocese has already made their decision that she should go. David accepts the task of defending his friend with intense vigor, and he shows no mercy. He leverages the priests’ opinions on visitations against each other, and just really goes to bat for Sister Andrea, culminating in him claiming that he, too, has seen the demon visiting the Cardinal (with such a claim being seen as blasphemous) and challenges them that if they’re going to force Sister Andrea to resign, they’ll have to do the same to him: one of the very few Black priests in the Church. This ends up scoring a victory for David and Sister Andrea, and the case is dropped. A grateful Sister still insists that David go to Confession for lying about seeing a demon with the Cardinal. That makes me think—with all of the intrigue that seems to be infesting the Church, is David’s Confession going to stay confidential?

We get some real Sheryl/Leland animosity this week. They’ve always had a tumultuous partnership. Sheryl is really starting to find some independence and bite back at Leland after spending most of the last few episodes being quite chummy with him. She’s already done away with Taylor, who Sheryl quickly deduced was planted by Leland to spy on her, and has replaced Taylor with a new intern, someone much more interested in putting in actual work for Sheryl. Leland is not happy about this, and immediately goes to the reclusive manager of the company.

Sheryl eventually bribes her way into a meeting with the manager to counter Leland, and when meeting him, sees not a man, but a large, naked, horned, five-eyed demon on the exercise machine. Shellshocked, when she later asks the floor manager to describe him, he confusedly says he reminds him of Ted Danson and has two eyes. However, after Sheryl gets promoted, Leland is waiting for her and asks “How many eyes?”  When she responds with what she’s seen, he smiles, “Welcome to the team.” Sheryl, on the verge of tears, asks if she’s having a psychotic breakdown. Reaching to shake her hand, Leland declares, “Absolutely,” and lets out an absolutely sinister laugh. What the hell is going on here? It’s entirely possible that Leland is gaslighting her as revenge for going around him, since he never actually describes how he appears to him. But as Leland pulls Sheryl ever further into his inner circle, it’ll be really interesting to see how this deepens next week, and how the two will continue to play this power game.

It was surprising to hear that when Kristen confided in Sheryl about hearing the voice whispering “Watch out!” in the middle of the night, Sheryl revealed that when she and Kristen’s father were going through divorce, young Kristen would come running into their room, claiming she was hearing a voice whispering “Get out!” She bluntly pivots to suggesting that resurgence could be about Andy, and maybe Kristen is better off without him.

Last week I had some suspicions about the video call, but didn’t go too much into how it was kind of weird how rocky the reception was and how Andy really didn’t offer anything in the way of substance to the conversation before quickly logging off. But I’m pretty sure there is definitely something wrong here.

Jessica, the fourth witness, mentions under hypnosis with Dr. Kurt that the voice that warned her to get out also specifically had a message for David—that he should be wary of his sister. David has no sister, so they surmise that this may be in regards to Sister Andrea. Luckily, all it takes is some light digging to learn that Jessica’s alibi is completely false, and inserting herself as a survivor of the disaster is just Munchausen Syndrome. What’s more, she once worked as an intern for a psychiatrist named—

“LELAND TOWNSEND!” I yelled through my hands clasped over my mouth. I did the Leonardo DiCaprio pointing meme! And I got it right! This lady was sent by Leland to spoil the broth! Jessica drops the facade. She remarks on how everyone seems meaner and more hostile these days, and affirms that what that means is, “Your side is losing.” And then, appearing to look directly into the camera, she says, “That doom you feel…it’s justified.” Whether or not this is the last we see of Jessica, she served as a reminder of Leland’s vast net of influence.

This season in general hasn’t been doing any favors for the reputation of the Catholic Church. The show is still very respectful to the faith at large, and doesn’t paint David and Sister Andrea in a negative light for their visions and beliefs, but the institution overall is showing some very unpleasant wrinkles. From the Monsignor’s reticence to pursue the case once race is involved, to LeConte’s Vatican missions, to the Tribunal’s insistence on ousting Sister Andrea, there is clearly a poison in the Church that David and Sister Andrea will have to reckon with sooner rather than later. This all serves as a continuing challenge to David’s faith. He wasn’t out of the woods when he got ordained—on the contrary, he’s in deeper than he’s ever been.

Evil is streaming Sundays on Paramount+.